Deep in India's northeast, villagers use grass to sound-proof their huts from deafening rain, clouds are a familiar sight inside homes and a suitably rusted sign tells visitors they are in the "wettest place on earth".

Oddly enough, lifelong residents of Mawsynram, a small cluster of hamlets in Meghalaya state have little idea that their scenic home holds a Guinness record for the highest average annual rainfall of 11,873 millimeters (467 inches).

"Really, this is the wettest place in the world? I didn't know that," Bini Kynter, a great-grandmother who estimates she must be "nearly 100 years old" tells AFP.

"The rain used to frighten me when I was a young girl, it used to make our lives hell. Today people have it easy," she says, wrapping a green tartan shawl tightly around her shoulders.

Meteorologists say Mawsynram's location, close to Bangladesh and the Bay of Bengal is the reason the tiny cluster receives so much rain.

"What happens is that whenever any moisture gathers over the Bay of Bengal, it causes precipitation over Mawsynram, leading to a heavy, long monsoon season," Sunit Das of the Indian Meteorological Department told AFP.

While annual monsoon rains lashed the national capital last week, causing traffic chaos and flooding at the international airport, such problems are mild for Mawsynram.

Just thirty years ago, Mawsynram had no paved roads, no running water and no electricity, making its six-month long monsoon an insufferable experience for its mostly impoverished residents.

Landslides still occur regularly, blocking the only paved road connecting the hillside hamlets. Rainwater still seeps into the mud huts occupied by some villagers. And, while most homes now have electricity, outages are commonplace.

Every winter the people of Mawsynram spend months preparing for the wet season ahead, anticipating nonstop rain and no sunshine for several days at a time.

They repair their battered roofs. They cut and hoard firewood -- a source of light and fuel for cooking. They buy and store foodgrains, since few will venture out to shop during the wettest months between May and July.

The women make rain covers known as "knups," using bamboo slivers, plastic sheets and broom grass to create a rain shield that resembles a turtle shell, meant to be worn on one's head while being large enough to keep rain off one's knees.

The labour-intensive process of weaving a knup -- each one takes at least an hour to complete -- occupies the women of the village right through the rainy season, when they are cooped up indoors for months at a time.

Bamboo and broom grass -- a delicate, fragrant, olive-coloured grass used to make Indian brooms -- are among the chief plants grown in this rocky, hilly region.

Broom grass is dipped in water, flattened using wooden blocks and finally dried on rooftops across Mawsynram. According to Prelian Pdah, a grandmother of nine, this makes the grass stronger and more likely to survive a downpour.

Pdah, 70, spends part of the winter and all of the monsoon season making bamboo baskets, brooms and knups which are bought by visiting businessmen who sell them around the state.

"I don't like the heavy rainfall, it's boring to stay indoors all day. It's annoying," she tells AFP.

Although few Mawsynram residents seemed to know or care about their record-holder status, the right to the Guinness title has been hotly disputed by a nearby town, Cherrapunji, which used to lay claim to that honour.

In sleepy Mawsynram, many find the record-setting monsoon downright depressing.

"There's no sun, so if you don't have electricity it's very dark indoors, even during the day," Moonstar Marbaniang, the pyjama-clad headman of Mawsynram says.

Those who have second homes elsewhere flee to escape the season. Others catch up on their sleep, according to Marbaniang, whose first name suggests one of the more striking legacies of colonial rule in India's northeast.

Historians say the past presence of British soldiers and missionaries in this region has seen many people name their children after random English words or famous historical figures, often with no knowledge of what they might mean.

State capital Shillong's former nickname as the "Scotland of the East" also goes some way to explain the popularity of tartan scarves and shawls, even in the most far-flung and underdeveloped villages of Meghalaya.

Somewhat fittingly for a state whose name means "the abode of the clouds" in the ancient Indian language of Sanskrit, it is not unusual for clouds to drift through people's homes in Mawsynram, leaving a wet film on their furniture.

The grass-covered roofs are meant to muffle the relentless drumming of the rain, but a heavy downpour will usually dislodge the grass to deafening effect.

"We have to talk a little louder to be heard during the monsoon!" 67-year-old Marbaniang tells AFP, his mischievous eyes sparkling.

When the monsoon finally ends, there are no parties to mark its exit. The rainy season simply gives way to the repair season, Marbaniang says.

"We don't hold any celebration or festival to mark the end of the rain. We just start drying our clothes outside," he says, flashing a toothless grin.

Despite enduring record amounts of rain, sanguine villagers say there is no other place they would rather live.

Marbaniang, whose children all live in Shillong, says: "I'll never leave, this is my home, I was born here, I will die here." 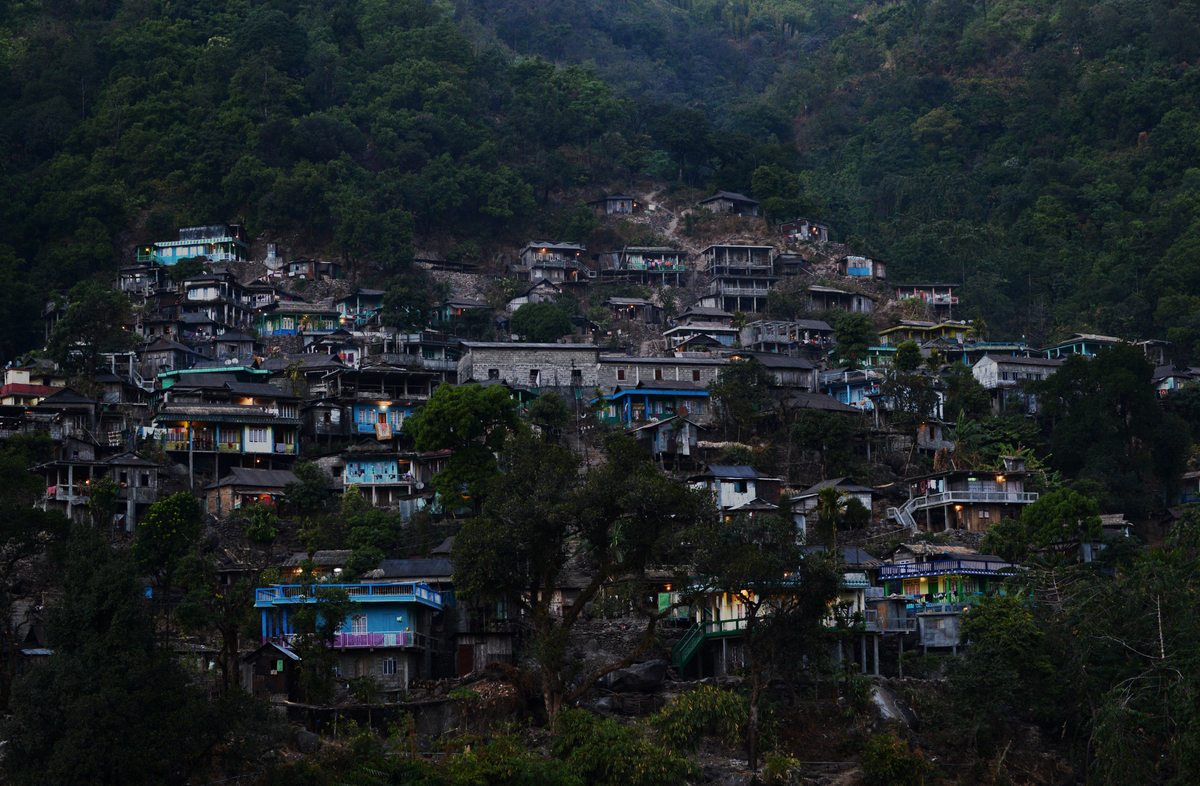 1 / 6
In this photograph taken on February 3, 2013, some homes appear with their lights on in the early evening in a village, part of a cluster of hamlets at Mawsynram in the north-eastern Indian state of Meghalaya, in what is considered the 'wettest place on earth' according to the Guinness World Records authority. (ROBERTO SCHMIDT/AFP/Getty Images)
Getty Images