When it comes to the subject of GMO (Genetically-Modified Organism) food, it's hard not to have an opinion. You might be skeptical or inquisitive, outraged or indifferent; perhaps more often than not, you feel a little of each. Still, there's growing consensus on the issue. A recent poll states that 93 percent of Americans believe that GMO food should be labeled. Consider this statistic a moment: 93 percent of America actually agrees on something. This from a society where 26 percent of respondents still believe the sun orbits around the earth. Based on this new GMO survey, at long last we can finally agree on what's for dinner. Or rather, what's not for dinner. Wait, scratch all that. Maybe we really can't agree on anything.

As a 20-year farmer who has raised GMO corn and soybeans for the commodity market, as well as organic, sustainable produce sold at farmers' markets, my two cents is this: Love it or hate it, when it comes to the bigger picture (see 3 "bigger pictures" below), it doesn't especially matter. The companies that produce GMO seeds and their affiliate herbicides have already won. And with the food scoreboard reading 96 percent industrialized to 4 percent organic, if this had been a farming football game, the mercy rule would have already been called.

The fact is that just a handful of companies provide the corn, soy and canola seeds to America's farmers, amounting to more than 90 percent of market share. What does this mean for consumers? Nine out of every 10 bites of food -- and even higher for chicken (raised on corn and soy), ice-cream (dairy cows supplied corn silage), cheeseburgers (corn) and tortilla chips -- are created with GMO ingredients. The same goes for every sip of soda, processed fruit juices, and most yogurts (corn syrup in each). In fact, we're so jacked up on GMO corn that when a scientist from UC Berkeley created a test -- based on corn's unique carbon patterns -- he determined that 69 percent of the average American's body carbon is derived solely from corn. Insert your own corny joke here.

As a young farmer, I witnessed this change in real time. Starting in 1996 (when GMO seeds went mainstream), practically every farm in my area began widespread adoption of GMO seeds. Meanwhile, worldwide, growth in GMO corn, soybeans, canola, rice, etc. grew at a staggering 9,000 percent. For a global economy mired in a deep recession, it appears that GMO seed companies have been doing just fine and dandy.

But you didn't have to be a farmer to witness these changes going on. In fact, you didn't even have to do much of anything, other than look out your window... from 35,000 feet. As it turns out, the GMO revolution didn't happen while we were sleeping, or while some consumer watchdog group had its back turned. It happened while we were all flying straight over 'Flyover Country'. To see what I mean, check out these Google Map photos, taken just in advance of grain planting in the spring of 2015: 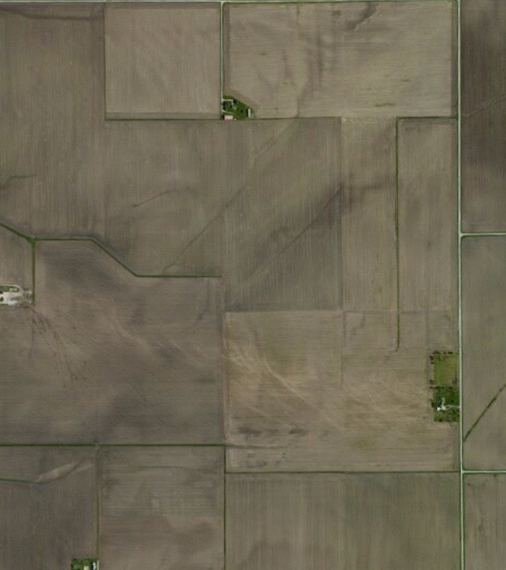 See all those brown squares? Those are fields that have been recently sprayed with herbicide. The straight green lines are fence rows, and little green rectangles and triangles are lawns. 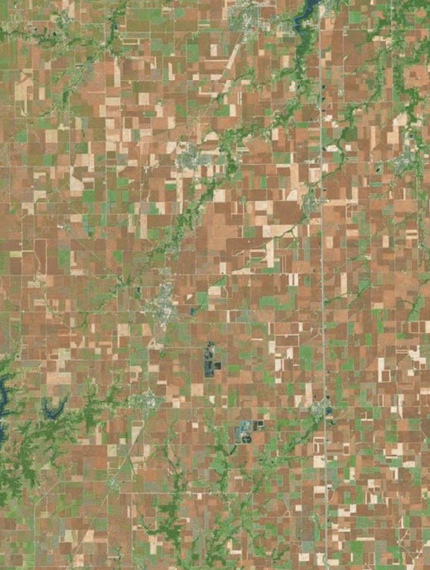 Now, let's back out a bit, gaining a little perspective. More killed-off fields, with some green squares remaining in winter cover crops. Those wavy green lines are rivers and watersheds. 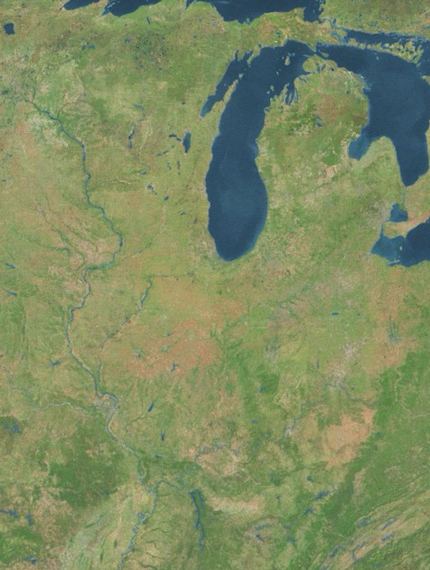 Finally, here's a view from way up high. Recognize where we are?

Zooming out from center, this is Illinois. And Illinois, based on the amount of herbicide that's been sprayed onto her fields, is on life support.

See, despite whatever personal opinions you may hold about the safety, health benefits or labeling of GMO foods, one fact remains inarguable: In order for these crops to grow, it requires death on a massive scale. And that's precisely how GMO crops function. The genetic modification creates an immunity to herbicides such as glyphosate (commonly sold under the brand name RoundUp, for example), eliminating competition so the corn/soybean/canola doesn't die when everything else does.

And when I say death on a 'massive' scale, I'm talking massive. You can see it from outer space. According to the USDA, this year in America alone, more than 170 million acres of corn and soybeans are in production. At a conservative estimate of 10 gallons of glyphosate (the herbicide most commonly used in conjunction with GMO crops) per acre in dilution, this translates to roughly two billion gallons of herbicide poured onto American soils this year alone. Put another way, we're taking an area the size of California and Montana combined, and killing it dead each year.

Most ironically, more than 85% of this GMO corn and soy doesn't even end up as food for humans, at least not directly. 40% is used for ethanol production, and another 45% goes into animal feed. So, let's get this straight: we're killing off hundreds of millions of acres not for human food, but primarily for fuel and feed? That's a real head scratcher right there.

The bottom line is this. Instead of worrying about whether a bag of GMO corn chips is safe to eat, we should probably be asking ourselves some bigger questions. Such as, are we okay with using billions of gallons of herbicide each year, supplied by many of the same companies that provide our seeds? And perhaps most importantly, what are the viable alternatives?

As Americans, we enjoy nothing so much as a fair fight, healthy competition, and good sportsmanship. Everyone loves a tied ballgame, late in the 4th quarter. But in an agricultural landscape where the score remains locked at 96-4, perhaps it's time we all demanded a more balanced food system. I'd certainly tune in for that.