A deep-sea creature resembling a space alien more than an aquatic animal, photographed recently near the Canary Islands, was actually just a whale feeding on a school of fish.

The bizarre moment a Bryde's whale inflated itself into a gigantic orb after ingesting a whole school of bait sardines was captured on camera by photographer Eduardo Acevedo Fernandez, according to GrindTV. Fernandez posted a collection of the amazing images to his Facebook page, detailing how he and his companions thought the day would be a loss because the weather was not cooperating.

“After two hours of navigation I spotted in the distance something like a hurricane of birds throwing themselves at the sea,” Fernandez wrote to GrindTV via email. “Quickly we headed to where we saw something amazing, hundreds of common and spotted dolphins attacking a big ball of sardines, along with three [Bryde's] whales. The idea was to capture the exact moment of the whale attack on the ball of sardines, but we knew it was very difficult because of her extreme speed.”

He had mere seconds to capture the main event, the moment when the whale swelled into a giant balloon in order to consume the school of fish.

The Bryde's whale has between 40 and 70 pleats on its throat which expand while feeding, according to the Whale and Dolphin Conservation Society. It mainly eats schooling fish but will sometimes feed on krill and other planktonic crustaceans.

Weighing around 90,000 pounds and measuring between 40 and 55 feet, the Bryde's whale sometimes uses other methods of feeding in its natural tropical habitat, according to the National Oceanic and Atmospheric Administration (NOAA). These methods include skimming the surface, lunging and creating bubble nets. They can dive for five to 15 minutes and reach depths of around 1,000 feet. 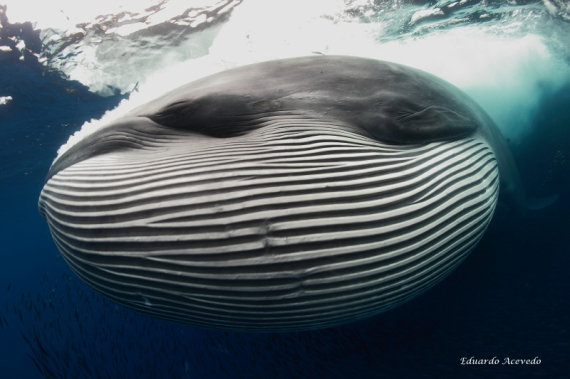 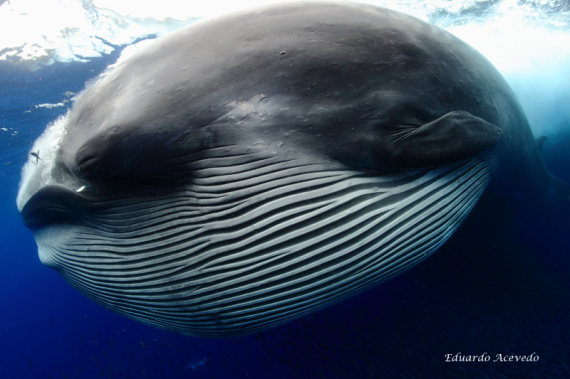 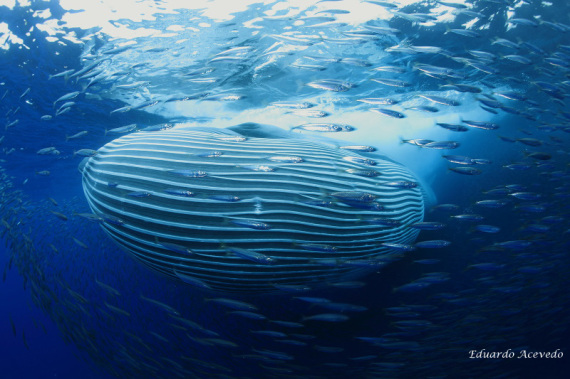