When it comes to hearing underwater, most mammals' ears just aren’t up to the task.

For humans, it’s partly because the density of our eardrums is too close to the density of water, the Dartmouth Undergraduate Journal of Science reports. Then there's the fact that sound waves travel four to five times faster underwater, so our eardrums have a hard time picking up the disturbances.

But while whales were land mammals 50 million years ago, they have evolved to hear each other incredibly well underwater -- up to 1,000 miles apart, according to National Geographic. New research from the Smithsonian National Museum of Natural History finally shows how.

The discovery came when Maya Yamato, a postdoctoral fellow in the Smithsonian’s Department of Vertebrate Zoology, analyzed 56 fetus specimens of toothed and baleen whales from the museum’s collection by sending them through a CT scanner. Smithsonian Magazine heralds the nondestructive approach as a possible game-changer for future studies since the specimens, which were mostly collected from commercial whaling operations in the early to mid-20th century, are too fragile and rare to examine via traditional research methods.

“How we grow, especially in utero, tells us a lot about how we have evolved,” collection curator Nicholas Pyenson, who participated in the study, told the magazine. “So looking at fetal data can give us a lot of answers in terms of how an animal develops.” 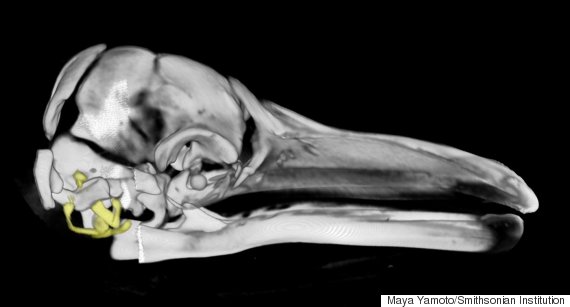 In this 3D reconstruction of a fin whale fetal skull, the yellow markings represent the early developmental stages of ear bones.

Yamato and Pyenson found “early fetuses have features in their ears that can be recognized as components of a typical mammalian ear,” even land mammals, she told The Huffington Post.

But as the fetus grows inside the womb, Yamato and Pyenson point out, the whale’s mammalian structure develops into something called an acoustic funnel, which may play a critical role in underwater hearing.

Yamato and Pyenson also found that the funnel's placement differs from baleen to toothed whales. While baleen whales -- such as humpbacks -- communicate through song, toothed whales like dolphins and sperm whales use clicks and echolocation. Yamato and Pyenson's research, just published in the March 11 issue of PLOS ONE, showed that some baleen whales’ acoustic funnels face sideways from their head. Toothed whales, on the other hand, have funnels that lean more toward their snouts.

“As [whales] transitioned to life in water, they had to completely modify their auditory hardware to work under water, despite all of the terrestrial baggage from their ancestry,” Yamato told The Huffington Post in an email. “So whale ears teach us how evolution can produce new solutions for alternative lifestyles, while illustrating the incredible diversity and adaptation of life on earth.”

Yamato says this research might not necessarily translate to human hearing, but that the new information “is like a large missing puzzle piece for many questions in whale evolution."

“Our data shows us how whales defy the normal patterns of mammalian development," Yamato told HuffPost, "and successfully conquered the oceans -- which is amazing!”