Wax inside a whale’s ear stores all sorts of useful information on the animal’s exposure to pollutants and stress levels throughout life, researchers have found.

The team, led by Sascha Usenko, a environmental scientist at Baylor University in Waco, Texas, extracted an earplug from a blue whale (Balaenoptera musculus) killed in a collision with a ship off the coast of Santa Barbara, California, in 2007 and found it had come into contact with several organic pollutants and contained high levels of the stress hormone cortisol as it reached sexual maturity.

“It’s difficult to recover time-specific information on chemical exposure for almost any animal,” says Stephen Trumble, a biologist also at Baylor and a co-author of the study, published in Proceedings of the National Academy of Sciences this week. That is especially true of the relatively rare blue whale, the world’s largest inhabitant.

Decimated by historic whaling practices, blue whales number just 5,000–12,000 individuals worldwide, and they are threatened by entanglement in fishing nets, environmental noise and pollution. Scientists have long used whale blubber as a record of the chemicals that these enormous creatures absorb as they traverse the ocean. But analysis of blubber does not indicate when chemical contamination occurred, or how long it lasted.

The whale earplug from a blue whale that was used in the study.

Whale earwax is a fat-rich deposit that stores the same chemical data as blubber. But it also records time — similarly to the rings of a tree, the wax is laid down in light and dark bands, with each band correlating roughly to a six-month period. In baleen, or filter-feeding, whales, earwax forms a solid plug that may be tens of centimetres long and remains intact even after its death.

Usenko and his team identified their specimen as a male aged about 12 years. During his brief life he came into contact with 16 persistent organic pollutants, including pesticides and flame retardants. Exposure to the most persistent chemicals was greatest in the first year — and accounted for one-fifth of his total lifetime contact — suggesting a transfer of contaminants from his mother in the womb and during nursing.

Maternal transfer of pollutants is known to happen in other mammals, such as seals and humans. Once these compounds enter the food chain, they are passed on and accumulate. “Some of these chemicals are no longer in use, such as flame retardants that were outlawed in 2005, but they can stick around for 50 or 60 years,” says Usenko. Other toxins uncovered from the earwax were probably picked up along the way. Mercury — which can cause brain damage — spiked twice in the sample, at around five and ten years.

Over the whale’s life, concentrations of cortisol, a stress hormone, doubled. The peak was directly after the whale reached sexual maturity, at about ten years old, suggesting stress from sexual competition. But it is unclear whether the overall increase was caused by natural events, such as weaning, or by human activities, such as pollution and noise.

The research is “exciting”, says Jeremy Goldbogen, a marine biologist at Cascadia Research Collective in Olympia, Washington, but “the inability to distinguish baseline stress levels from those associated with anthropogenic disturbances is a limitation of the study.” 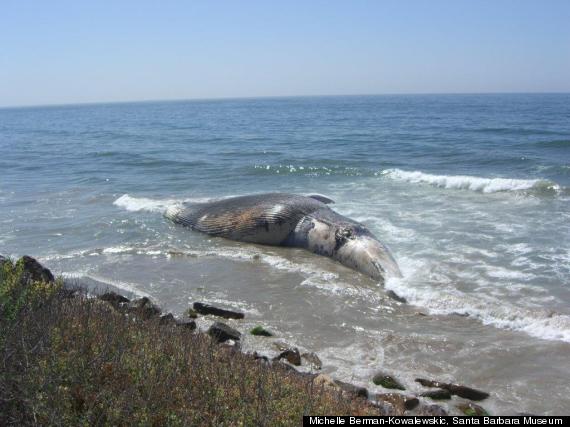 Usenko and his team are now hoping to investigate that question by analysing some of the 1,000 or more whale specimens in museums worldwide. “If we can look at individuals that lived in an environment without some of the stresses we see now, then we could tease out the causes of the cortisol increase,” he says.