Back in 2005, my friend and I visited Playa del Carmen, Mexico to enjoy the relaxing summer ambience. After a couple of days of experiencing the touristy side of the Riviera Maya, we departed to Tulum where we appreciated the ruins and the nearby beautiful white sand coastline. However the highlight of our visit to Mexico was yet to come. We boarded a bus and then boat to Holbox, an island removed from the hustle and bustle of the mainland. From Holbox we arranged a tour to swim with the whale sharks. The tour operator stated, "Since the whale sharks exist in the wild, we cannot guarantee that you will see them. But since it is high season, I can tell you that you will see at least a few of them." We excitedly departed the next morning on a small speedboat forty-five minutes off the island's coast. In groups of four snorkelers, we entered the sea to swim with nature's largest fish, adults measuring between eight and twenty meters in length. The boatman dropped us ahead of the whale sharks directly in their path to ensure a successful outing. The massive whale sharks swam past us as we gleefully caught a glimpse of this natural phenomenon. The only other creatures we witnessed that day were manta rays that also consumed the ample plankton. 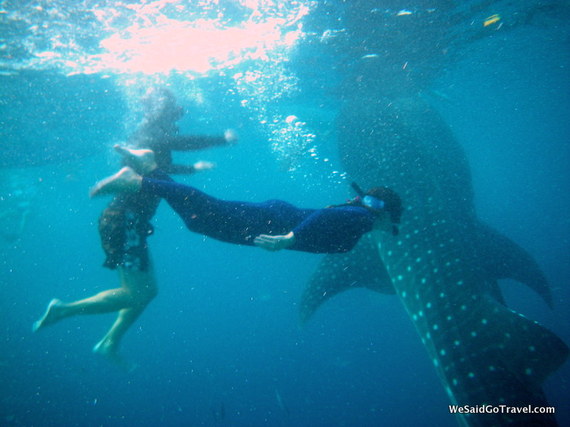 Fast-forwarding in time, in August 2013 my wife and I were offered the opportunity to swim with whale sharks just off the Philippine island of Cebu. In the evening, we arrived just outside Oslab fishing village where we were served dinner in Tata and Vincent's lovely home overlooking the coast. They explained, "Whale sharks were problematic because whale sharks consumed the bait fisherman used to catch fish. Rather than fighting with whale sharks, the fisherman began to feed whale sharks and after the whale sharks moved on, they could fish in peace."

This system was in place and relatively unknown until a tourist found out about the fisherman's practice and filmed the spectacle to be posted on YouTube. After the world caught sight of this wonder about two years ago, tourists began to arrive from around the world. When I related my whale shark experience in Mexico, Ricky Tio, from Cebu Holiday Tours, stated, "It is the same in Dongsol, in the Philippines. You basically have to chase the whale sharks by motorboat. Here it is different. The whale sharks stay in place because the fisherman feed them daily, about five kilos or ten percent of their overall diet."

Early in the morning we drove to the whale shark site where a few tourists and marine biologists were already present. Near the coast, a few fisherman boats were tethered together feeding whale sharks whose fins were visibly evident. During a short briefing we were informed that we could not wear sunblock and were advised to maintain a distance of at least four meters from the whale sharks. We entered a pontoon style boat and within minutes we were prepared to enter the water. A whale shark was at our bow feeding with its cavernous mouth agape sucking in high quantities of seawater lined with krill and plankton. We donned our snorkels and submerged into the ocean. Unlike the Mexico experience, it was unnecessary to follow the whale sharks by boat since they remained close to the fishing boats. At least five mammoth whale sharks surrounded us in the water. We were unable to maintain the recommended four-meter distance because if we moved away from one creature, we would close in on another. The whale sharks were truly colossal, like swimming with school buses. The whale sharks slowly fed while we carefully observed them for thirty minutes. During our encounter, the boatman took over two hundred photos, many with my wife and I posing under water with the planet's largest fish.

This experience with the whale sharks has been one of many wonderful experiences that we have had during our stay in the Philippines. However, even more amazing than the incredible whale sharks were the sincerely friendly and welcoming Philippine people.

About the Author: George Rajna, M.B.A., Masters of Science in Communications Disorders, is a bilingual speech therapist who has traveled to over one hundred countries across six continents. He composes music on the guitar and ukulele, and spent two years working in rural education for Peace Corps Paraguay. He is the co-author of Traveling in Sin. Since July 2012, George and Lisa have been living abroad in Southeast Asia follow their journey at We Said Go Travel.