With all the talk of empathy (or the lack thereof) in the Supreme Court, the health care industry, or society as a whole, it is good to realize that it is an ancient mammalian trait that is occasionally expressed by other animals. A twelve year old example is the gorilla, Binti Jua, who rescued a boy who had fallen into her enclosure at the Brookfield Zoo, in Chicago. But now we have a new hero, a Beluga whale, named Mila, who yesterday (July 28th) saved a member of our species. (In fact, animals far more often save members of their own species, which is what these behaviors obviously evolved for, but we tend to be more impressed when they help us!)

At a Chinese zoo, they had the brilliant idea of organizing a competition in which divers had to sink to the bottom of an arctic pool and stay down for as long as they could without breathing equipment. They were surrounded by Belugas. One terrified diver became paralyzed, however, and would have died in the icy water if it weren't for one of the whales, who spotted her troubles before anyone else did, including the event's organizers. A visitor on the gallery took pictures. 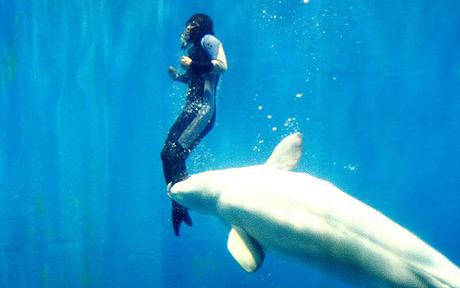 Saved by a whale!

The rescued diver, Yang Yun, thought she was going to die, but was quickly pushed upwards: "I began to choke and sank even lower and I thought that was it for me -- I was dead. Until I felt this incredible force under me driving me to the surface."

The capacity to empathize with others is what binds mammalian societies together: is it any different for ours?

More about this question in The Age of Empathy (Harmony, September 2009).