A whale fossil that's been sitting on the grounds of a Southern California school for perhaps 80 years may be a previously unknown species.

The fossil, a skull embedded in a boulder, is set to go to The Natural History Museum of Los Angeles for cleaning and analysis. However, museum paleontologist Howell Thomas believes the skull belongs to a new species of extinct sperm whale.

Chadwick School is a private K-12 school in Palos Verdes, not far from Long Beach, Calif. Almost 80 years ago, when the campus was constructed, builders left boulders of hard sedimentary rock, known locally as Palos Verdes stone, sitting around, sometimes incorporating them into the school buildings. 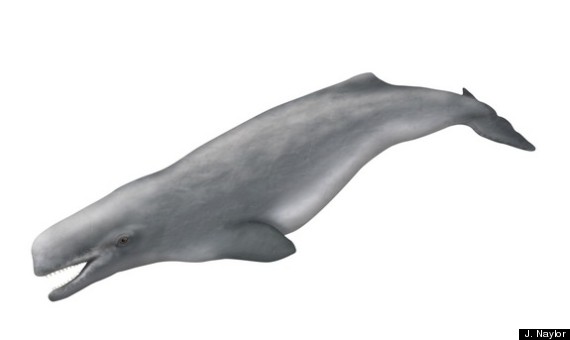 A sketch of Aulophyseter morricei, an ancient sperm whale thought to be a relative of the new species.

Byhower, who has taught at the school for 30 years, long ago noticed fossils embedded in the stones. A former whale conservationist, Byhower recognized that some of them looked like marine mammal fossils.

Finally, he began looking for a paleontologist who could tell him more. Howell came out to inspect the fossils and identified some baleen whale ribs and vertebrae that may have belonged to a sea lion or seal. Then Byhower showed him a boulder that surprised him.

"Within about four seconds, he looked at this one and said, 'Whoa, this is really special,'" Byhower said.

The fossil is embedded in a boulder 32 inches (81 centimeters) long, 26 inches (66 cm) wide and 14 inches (36 cm) deep. At one end of the boulder, Byhower said, is the base of a skull. At the other end, a lower jaw juts out. It will take a year to chip away the rock surrounding the fossil, but so far, Howell believes the skull belongs to an ancient sperm whale never described by science.

Sperm whales (Physeter macrocephalus) are the largest toothed whales alive today. Researchers aren't sure if the new skull represents a new species or even a new genus of this group.

The rock comes from the Monterey formation, a layer set down in the Miocene epoch about 12 million to 20 million years ago. At the time, Southern California was under a shallow sea.

The museum is set to remove the fossil from the school grounds on Feb. 5; paleontologists plan to make a cast of the skull after it is prepared to return to the school for educational purposes. For his part, Byhower plans to integrate the surprise fossil find into the curriculum — and to use it to encourage in his students both observation of, and curiosity about, the natural world.

"People have walked by these fossils for decades and never even seen them," he said. "Others have seen them but never really wondered."

Copyright 2014 LiveScience, a TechMediaNetwork company. All rights reserved. This material may not be published, broadcast, rewritten or redistributed. ]]>
Go To Homepage