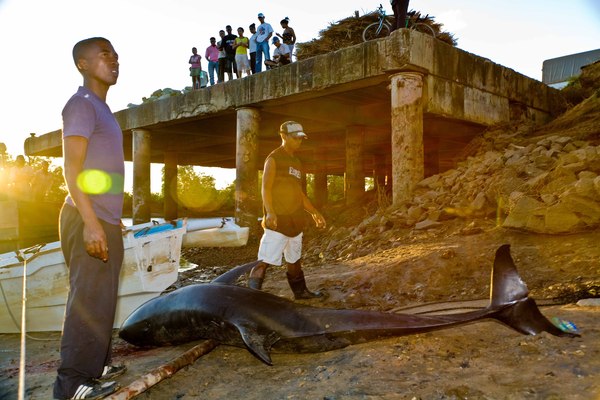 A report released yesterday by a panel of scientists, conservation organizations and government agencies have positively linked a mass stranding of whales to sonar used by Exxon/Mobile during an offshore survey. In this case, the whales fled the area prior to the seismic phase of the survey, which shows that even this type of sonar (also used by military and research vessels) is devastating to whale and dolphins.

An independent scientific review panel has concluded that the mass stranding of approximately 100 melon-headed whales in the Loza Lagoon system in northwest Madagascar in 2008 was primarily triggered by acoustic stimuli, more specifically, a multi-beam echosounder system operated by a survey vessel contracted by ExxonMobil Exploration and Production (Northern Madagascar) Limited.

WCS and IFAW support these conclusions that add to a mounting body of evidence of the potential impacts of anthropogenic noise on marine mammals," said Dr. Howard Rosenbaum, Director of the Ocean Giants Program for WCS. "Implications go well beyond the hydrocarbon industry, as these sonar systems are widely used aboard military and research vessels for generating more precise bathymetry (underwater mapping). We now hope that these results will be used by industry, regulatory authorities, and others to minimize risks and to better protect marine life, especially marine mammal species that are particularly sensitive to increasing ocean noise from human activities. 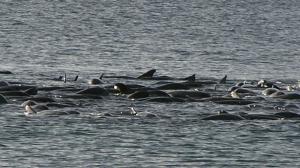 While not conclusively proven, NOAA acknowledged a correlation with sonar in a similar mass stranding of melon-headed whales occurred in Hanalei Bay, Kauai, Hawaii in 2004. At the time of the stranding, the Navy was conducting exercises involving loud sonar in the area. "Sound propagation models suggest that sonar transmissions were likely detectable over a large area around Kaua'i for many hours on the day prior to the stranding, as well as within Hanalei Bay when the animals were there," said Brandon Southall, NOAA Fisheries Service's Acoustics Program Director. "Active sonar transmissions on the 2nd and 3rd of July are a plausible, if not likely, contributing factor to the animals entering and remaining in the bay."

The report comes at a time when there is considerable pressure from the oil industry to open up more areas for offshore seismic exploration, including the coastal U.S. and pristine arctic regions. In areas where the search for oil is underway whales and dolphins are beaching regularly, and commercial fish populations can be reduced by half.

This video shows the impact on whales and dolphins -- it is heartbreaking to see the pilot whale calf trying to communicate with its mother, and a bit alarming to learn how global this situation turns out to be.