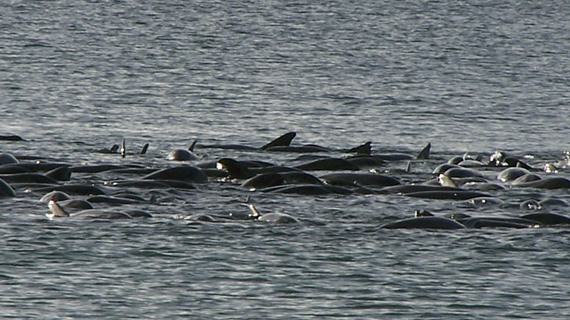 Whales, dolphins and other marine mammals in the Pacific just caught a huge break: A federal judge this week invalidated a plan allowing the U.S. Navy to conduct dangerous and disruptive war games that the government admitted would cause about 9.6 million instances of harm to marine mammals over five years.

These military exercises, which sometimes use explosives and ultra-loud sonar blasts, exact an ugly toll: Scientists have linked these kinds of activities to mass whale strandings, exploded eardrums and even death.

We're glad to see the federal judge ruling in favor of protecting wildlife from these dangerous war games -- especially the decision to turn down the Navy's claim that it needed unfettered access to the entire ocean at all times.

The National Marine Fisheries Service already identified vital areas to protect for whales and dolphins around the Hawaiian Islands and off Southern California, areas that should be off-limits to explosives, sonar, and other dangerous activities. So there was no reason for the agency to hand the Navy a blank check.

The judge noted the stunning number of marine mammals expected to be hurt by these underwater war games, including endangered whales and sea turtles, "makes no sense given the size of the ocean area involved." In short: It's a big ocean and there is plenty of space for the Navy to practice without hurting vulnerable populations of marine mammals.

The Navy and Fisheries Service had acknowledged that sonar, explosives, and vessel strikes associated with military training exercises was causing thousands of permanent injuries to marine mammals, from hearing loss to death. Millions more suffered minor or temporary damage to breeding, feeding, and other activities.

One question before the court was whether that damage was avoidable. This week's ruling was clear that these federal agencies must do more to protect ocean life and uphold the Endangered Species Act and other federal environmental laws.

It's a major win that will undoubtedly help keep thousands of animals out of harm's way -- and hopefully an important shift toward federal policies that ensure the price of national security isn't paid by whales, dolphins, sea turtles and other animals that call these oceans home.