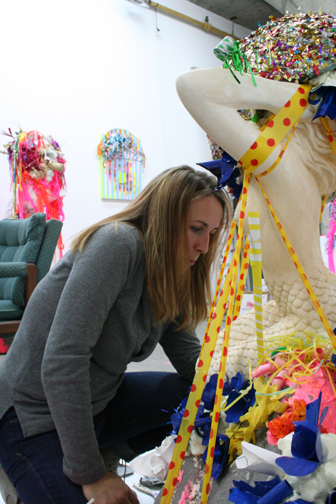 Interview by Virginia Broersma
Emily Silver makes work that is as visually calm as an air horn. Objects, drawings and videos that may have literally been involved in some kind of explosion or had their glitter-and-ribbon brains bashed out with a bat fill her studio, which upon entering happens to look like you've arrived just a little too late for the party. With closer inspection you see that her work has many components assembled in layers -- carefully crafted, manipulated, destroyed and rebuilt into something completely unordinary, fun and a little bit dark. I have the advantage of being Silver's neighbor and get to see the "behind the scenes" of her process on a regular basis, but with her work currently included in the Sur Biennial, I thought it would be great to sit down and talk more in depth.

Virginia Broersma: Your work often looks like you found the remains of a birthday party gone overboard and used the detritus to build your objects. Glitter, ribbon, faux-flowers, balloons and frosting-like paint all make recurring appearances in both your drawings and sculptures. Could you talk about your interest in parties and the celebration?

Emily Silver: I think the celebration in our lives becomes a time stamp as we grow older, and through memory we remember things that happen in our lives by reflecting back on the celebration. I'm interested in this quick rise of an event and how quickly it turns bad; it's something that's so treasured and cherished, and then immediately becomes garbage and it's left over and we want to get rid of it as soon as possible.

So I'm interested in using these materials to elevate them -- to give them another life: a new life that's much more precious than the moment that they live in. I'm also interested in that there's a bit of the ridiculous and tragic in these events. When you are going to a party, the idea of it is so much better than actually being there. Because it's over -- once the day comes its already over, things are already 50 percent off. I'm interested in that -- how fleeting these moments really are. 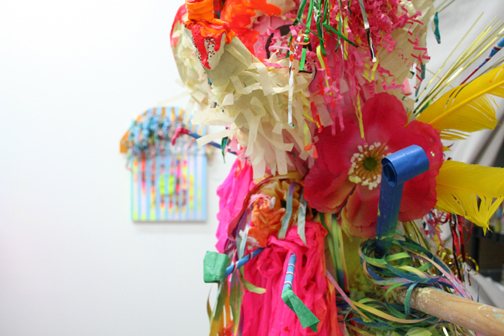 VB: In preparing to do this work, you've taken jobs related to these situations - you've worked at flower arranging, which is usually involved in weddings and other typically positive celebrations, and then you've worked in a funeral home with the same purpose.

ES: Yeah -- that's come in quite a bit. I worked in a mortuary for a while doing flowers for funerals. That was one of my favorite jobs. When I moved to LA it was the first job that I got here and it didn't help me make any friends at all -- I'd eat my lunch in the cemetery -- but I purposely did it because I feel like sometimes to research you need to be fully immersed in these things. So moving 3000 miles away and then working with the dead was a great experience for me. 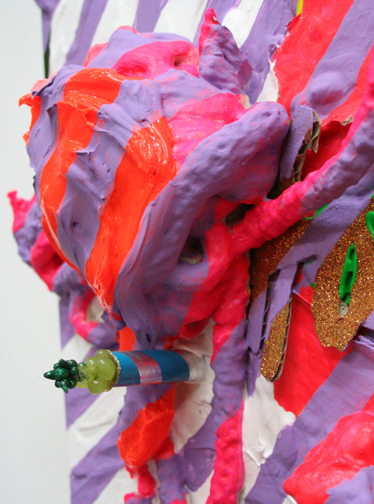 VB: Your work makes me think about the emotional arc of these events -- the anticipation, excitement, the delirium that happens at these festive events and then the let-down at the end of them -- the psychological comedown. Your pieces have a very celebratory look,- they're colorful and bright - and then the titles might allude to that tragedy that you mentioned. So are you thinking about the psychology of the experience of these things?

ES: Absolutely. I absolutely think that there's something in the moment --whenever you're caught in any moment -- for example, you get in a fight with somebody, and have had too many drinks at a party, you tend to act or do things that you wouldn't normally do, and I'm super interested in that emotional curve like you were talking about. I will often put text in or these titles that have a bit of a sting on purpose so that there's an attraction and repulsion.

The neon comes in a lot with that because neon is supposed to be a warning. We use them on road cones and when somebody is working on the street -- it's like a "beware" but we have a rat-shiny problem and we want to go towards the light. I like that kind of attraction and then repulsion; the pleasure and then the sting that happens.

VB: I've gotten to see you work in the studio quite a bit and I know you have a lot of fun in the studio. You constantly play with materials and amuse yourself with the sometimes silly and comical possibilities of your work. What role do you think humor plays in your work?

ES: I think humor is important for everybody to have. I know sometimes it's not something that people think or want to take seriously in art work. I'm not saying you should come and laugh a lot at the work, by any means, but I think having a sense of humor in tough times and having a sense of humor when things aren't going right, has been for me the best way to deal and to cope with things. 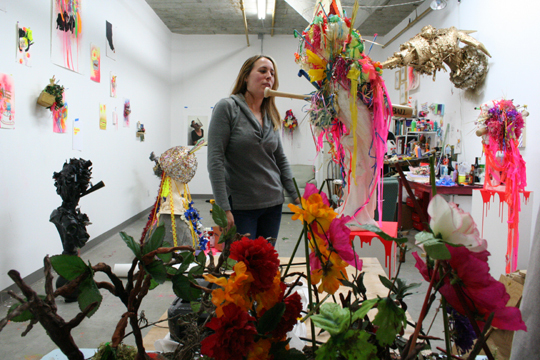 I also think it's a great way to communicate to people. If I could be something else it would be a comedian, but I guess both jobs would be failures at the bank. Either way I feel like I'm talking about the everyday and sometimes the mundane in material or in subject matter, sometimes the celebratory, but every time I'm trying to find that space where it IS funny. Right before or right after it was tragic, after I put the baseball bat in.

The moment of bashing something with a baseball bat is really hard to do in your own work, it's taking a big risk, it could fail, but then at the same time it's very funny afterwards and I think that's what true comedy is. Post-tragedy, post-accident or not taking one's self too seriously. I do want people to have a good time, but I also want people to have a moment, at least once, that they have with the work that they go someplace a bit dark. And then maybe they bounce back. 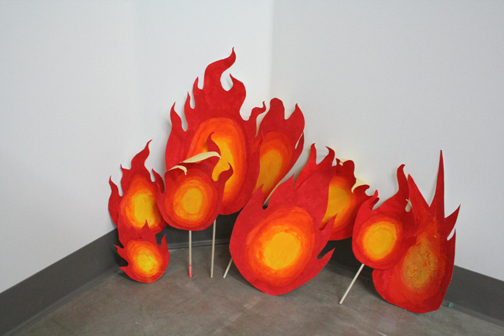 Emily Silver's work can be seen in the Sur Biennial at Rio Hondo College Art Gallery through November 18, 2013 and here. This interview can also be accessed at A STUDIO AFFAIR.