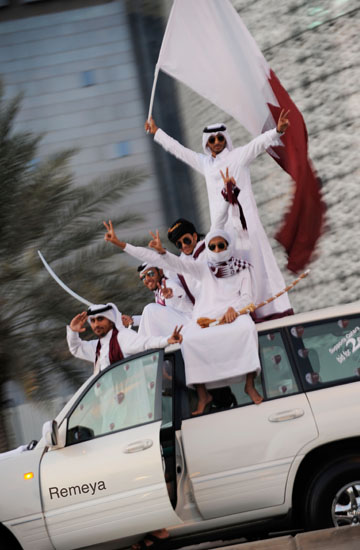 Qatar winning the 2022 World Cup Bid has provoked emotions on the international stage ranging from confusion to ire. Some of the unfortunate sentiments were broadcast on Twitter immediately following the announcement. Among them:

"These stadiums will be built on the backs of migrant workers."

"Qatar paid off the FIFA officials with their oil money."

"As a red-blooded American I am proud to have no fucking clue where Qatar is located. I guess I'll find out when the General gives directions to fire bomb it for its oil."

It's disappointing but entirely unsurprising that the U.S. is acting like a sore loser. They waltzed in doing very little prep work and expected FIFA to ingratiate themselves. I also can't help but feel as though the allegations of Qatar buying the bid indicates that someone was finally able to outspend the States and they are pissed.

When you watch the videos of the presentations, the proof is in the pudding. The U.S. promised diversity, but Qatar's presentation was delivered in three languages: English, French and Spanish. Their polished and thoughtful presentation is the brainchild of the unlikely Chairman behind Qatar's bid: a 22 year old Prince and graduate of Georgetown University Qatar who goes by the understated handle His Excellency Sheikh Mohammed bin Hamad Al-Thani. The Prince delivered his opening words in fluent French, but his intellect shouldn't detract from his athletic ability. His Excellency is a talented horseman who is recognized for completing one of the worlds most daring equestrian acts at Qatar's Asia Games opening ceremony in 2006. My adoration of his mother, Sheikha Mozah and her work with the Qatar Foundation is well documented, but now I have a new reason to try and get adopted into the family: the coolest brother ever.

When I read criticism of FIFA's choice, I see a lot of grasping at straws. No one will live or die by what country gets an Olympics or World Cup, but the gesture towards estranged countries like Russia or Qatar is larger than the game itself.

Winning this bid means far more to Qatar than it ever could to the States. For this tiny country, it is a matter of national identity. Finally, people will be able to point to Qatar on a map. However, this World Cup doesn't just matter to Qatar, it matters to the region. While most Arab countries aren't exactly dominate forces in international football, it is an amiable gesture to a culture that often feels disenfranchised by its Western neighbors.

Many argue Qatar's game won't draw numbers, but this is an egocentric and shortsighted notion. If you place a map of the United States or Europe of Qatar, this is the minimal area that will be traveling to Qatar for the games. Wealthy countries like Kuwait, Saudi, India and more will come out in droves, followed by die-hard football fans from other continents.

The only issue that I cannot find a proper retort to is the egregious heat in Qatar during the summer months, and the bizarre promise of air-conditioned stadiums. Even for me, that is crazy.

Last Thursday the sense of celebration and camaraderie was instrumental to the social progress of this rapidly growing country. In Doha, the hours after 2022's winner was announced was filled with young men in thobes hanging out of their car windows wielding both swords and peace signs. They sprayed pedestrians with silly string and backfired their engines into the night air, the gun popping sound echoing through the plumes of smoke. They wore fright masks and Afro wigs. Their sisters held their ankles from inside the car while their elated brothers hung out of the sunroofs waving massive Qatari flags.

My ex-pat friends and I couldn't resist the lures of screams and gridlocked traffic. At the Souq Waqif hundreds had gathered to watch the announcement on large television screens. They bellowed through vuvuzelas and waved flags -- Egyptian and Saudi flags, a sure sign that this World Cup did not represent one country, but the entire Middle East.

After eating grape leaves and smoking apple sheesha at the Souq market, we headed back towards the Corniche, a lovely strip of road along the Gulf where most of the street celebration happened. As we plodded through traffic we felt a tremendous sense of national pride. Inspired by the energy of the night, this is I hanging out the window of a sensible sedan and gently suggesting that in order to fully enjoy the evening's festivities, one might want to raise the roof.

I'll leave you with some pictures of the evening's events.

The magical Daniel Rohan is responsible for this slideshow; you can see his work here. The illustrious Emily Wilson took the video footage. And a talented young Qatari photographer, Alreem Kafoud, whose amazing work can be seen here, took the photo above.