When I was 16 years old, I had a 45-minute conversation with Michael Jackson. As you might imagine, the experience was thrilling. But what I was unaware of at the time was how that brief conversation would shape the trajectory of my life.

It was the spring of 1974 when I heard that my favorite band, the Jackson 5, was coming to Chicago. I immediately mailed away for tickets. When they arrived, I couldn't believe my luck: I got front row seats! From that moment on, all I could think about was meeting Michael.

When the day finally arrived, my father drove my best friend, Linda, and me out to the suburbs and dropped us off at the concert venue. We found our seats, fortuitously located right next to Michael's mom, Katherine. She was warm and friendly and after I engaged her in a conversation about how much I loved her boys, she got the whole group to sign my program. After the show, program in hand, I told Linda that we HAD to meet Michael. 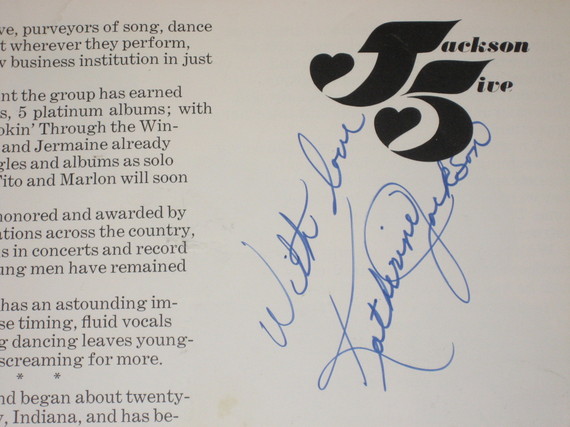 Our brilliant plan was simple: stay after the show and wait for him outside. Unfortunately, about 100 other people had the same brilliant plan, but we were determined. Over the next two hours, the group kept dwindling until it was just us two. We knew, we just knew in our hearts, that Michael was still inside the theater. Eventually, the manager of the venue came out and asked what we were doing; I responded matter-of-factly, "We're waiting to meet Michael." He told us they had left hours ago and I confidently replied, "It's your job to tell us he's not here. I know he is and we're not going anywhere."

Finally, fed up with the obstinate teenagers, he unlocked the theater and let us search the place. There was not a Jackson family member to be found. We were despondent.

When he asked us how we planned to get home, we realized that the train back into the city had long since stopped running for the night. In all of the excitement, we had completely lost sight of such practical matters. He was kind enough to give us a ride. On the drive home, we were oblivious to our driver; all Linda and I could talk about was our failed attempt to meet Michael and the punishment that awaited us both at home.

Right before dropping us off, the venue manager took pity on us and told us where the Jacksons were staying. I felt that surge of excitement and hope all over again, just as I did when the tickets first arrived. Even getting grounded for a week didn't dampen my mood or resolve.

Determined to meet Michael, the very next day, I defied my dad's orders and rushed to the hotel after school. I sat in the lobby waiting patiently for five hours. When it was obvious that the concert had already begun and Michael was nowhere in sight, I approached the man at the front desk only to be told, "I can't confirm or deny that the Jackson 5 are staying here." After much pestering, he finally pointed out that if a famous musical group was staying at the hotel, they probably wouldn't leave through the lobby.

Crushed by the sobering realization that I had missed him again, I sat down and wrote a heartfelt letter to Michael explaining how hard I had tried, how long I had waited to meet him and how much trouble I had gotten into through my attempts to connect with him. When I tried handing it to the man at the front desk, he refused to take it. Unfazed, I got into the elevator and stopped on every floor. When I reached the top, there was a hulking security guard who warned, "I think you're on the wrong floor." Bingo! I knew I was exactly where I needed to be. After much cajoling, I finally convinced him to take the letter. Then, I went home and got in huge trouble. Again.

It was all worth it because that same night, the telephone rang at 2 a.m. I was barely awake when I heard my dad answer and say, "Michael? Michael who?" I jumped out of bed and screamed at him not to hang up. He looked at me like I was a crazy person and said, "You tell this Michael Jackson, whoever he is, never to call here again at this hour!"

I grabbed the phone and spent 45 minutes talking to Michael Jackson. He was soft-spoken and kind -- it was like talking to a friend. We were about the same age and the majority of our conversation focused on his curiosity around the life of a normal teenager. He asked about school and my everyday experiences; we connected over our struggles with our strict fathers. It was an intimate talk between two kids.

As the conversation was winding down, I remember thinking, "No one will believe this. I have to get evidence." Then I thought, "No." Intuitively, I knew that asking for a personalized photo as proof would ruin the moment. The conversation was so authentic and pure. I didn't ask.

Talking to Michael Jackson was my first stretch goal -- something so big and so unlikely that most people wouldn't bother going after it. Unbeknownst to me at the time, that 45-minute call was one of the most important conversations of my life. It shaped me to be fearless and tenacious in pursuit of my goals.

Too often, we take "no" as a sign that we're not smart enough, powerful enough or capable enough. We create and tell ourselves stories that limit us. The trajectory of our future changes -- often dramatically -- when "no" no longer serves as an absolute, and we powerfully change our stories to support the action we need to move forward.