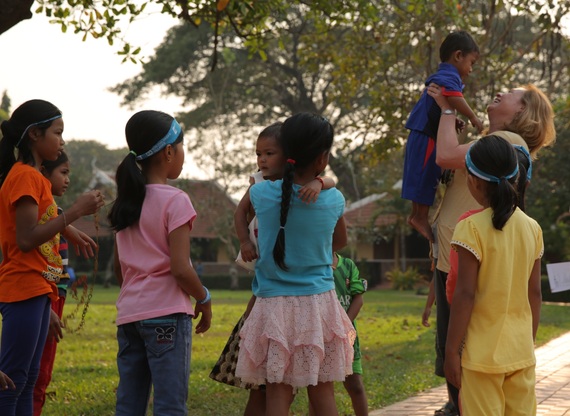 I first met 3-year-old Arun on my recent visit to our SOS Children's Villages in Cambodia. After spotting me, the cheerful boy smiled and began to mimic my every move. When I smiled, he smiled. When I raised my eyebrows, he raised his. When I laughed, so did he.

As I learned more about Arun from my Cambodian colleagues, I discovered that the little boy wasn't always so carefree. Just two months ago, he and his three siblings were brought to the SOS Children's Village in Siem Reap, one of six SOS Villages in the country and where about 130 orphaned, abandoned and vulnerable children live. Arun's mother died last year from an unknown illness. After her passing, Arun and his siblings were left in the care of their alcoholic father. The money he earned from his job was enough to buy alcohol, but not enough to care for his four children.

After Arun's father failed to pay rent for two months, Arun and his family were evicted from their apartment. His father was then forced to move his four children to the houses of family members and friends. Many of them, however, couldn't provide shelter or food for Arun or his siblings. This instability and lack of quality care is what ultimately caught the attention of a local monk, who alerted my colleagues at SOS Children's Villages in Siem Reap. Today, the children are safe at the village where they are being raised by a caregiver - known as an SOS Mother - in a loving, family environment. Here they can run, play and enjoy the childhood they were always meant to have. When I spoke to Arun's SOS Mother, she told me that after a few short weeks Arun soon began to call her "mom." This bond would not have been possible without the love, care and dedication given to him by this noble woman.

What I learned from my visit to Cambodia is that Arun's life story is one of many. Poverty, years of conflict, traffic accidents and an increase in HIV/AIDS cases have contributed to the weakening of young Cambodian families. They have also played a role in curtailing the potential of Cambodia's future generations.

For example, it is estimated that 570,000 children are living in the country without parental care. Without the support system of a family, these children are subjected to work with no pay in factories, in agriculture, or as domestic servants or sex workers. Even the children who do have caregivers may be forced to work in order to support their families.

Without a doubt, Cambodia is one of the world's most beautiful countries. Many tourists flock here to meet its welcoming people and admire its culture, scenic views and well-preserved temples. But within this beautiful country, there are still many challenges that leave its people struggling to support Cambodia's most vulnerable children.

Although many of us are miles away from Cambodia, it does not mean we cannot play a vital role in the upbringing of children like Arun. For over three years, I have sponsored children from around the world through SOS Children's Villages. I do this not only because I believe in our mission, but also because it is one of the best ways to invest in the future of our world.

Sponsoring children helps provide them with the much needed love, shelter, quality education and health care they need to realize their full potential. As global citizens, through child sponsorship, we can insure children like Arun are given a chance at a healthy and happy life.

Learn more and sponsor a child today through SOS Children's Villages at www.sos-usa.org.