This is full-on hilarious, and so much nachas, too: Sarah Silverman has launched what definitely qualifies as a PSA in her latest video imploring young Jews to head down to Florida to convince their grandparents to vote for Barack Obama. It's called "The Great Schlep" and it's a pretty damn genius idea. It's a double-mitzvah: Not only does it count as doing one's civic duty as an American (if you are an American who believes strongly in Obama as the best choice for president), but the joy it will bring to countless Miami shuffleboard courts is pretty much unparalleled (and well-timed, considering we're just about to embark on the High Holidays, where karmic points to weigh toward inscription in the Book of Life are always helpful).

Silverman's performance is typically profane (so if you are easily offended or are, er, John McCain, don't click), but also typically hilarious and clever. As for the campaign (mounted by hotshot ad agency Droga5), it is also hilarious and clever, with a very real chance for moving the needle thanks to a sure-to-be-viral concept, but also an idea that can't help but catch fire in the Jewish community, where targeted outreach is kicking into high gear for the final stretch. According to an American Jewish Community poll released today, 13% of Jews are undecided (the poll says Obama has a pretty impressive edge of 57-30, but anecdotal information about various Bubbies and Zaidies seem to indicate that one shouldn't get too confident). 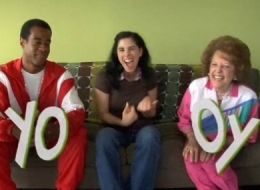 This is also yet another example of how a viral campaign unrelated to the official campaign can have a real impact. In this case, "The Great Schlep" is the brainchild of JewsVote.org which in turn if a project of the Jewish Council for Education and Research, a federal PAC "created to develop and disseminate information to voters in the United States around issues of concern to the Jewish community." It is explicitly supporting Barack Obama, but is also explicitly independent and, according to spokesperson Josh Kram via email, the campaign had no involvement with any of this. According to Kram, the project has been funded exclusively by donors after a 90-day fundraising period (alas for Jews used to the largesse of orgs like Birthright — you'll have to pay to schlep on your own, as no subsidies are yet available.)

Will "The Great Schlep" convince recalcitrant Jews? Who knows — either way, it should make some grandparents very very happy over the next few months. Now it's up to the kinder — with a little help on the issues from Silverman, who rightly points out Obama is "circum-super-sized." I think that comes somewhere between the economy and dealing with the potential threat of a nuclear Iran.

p.s. Shana tova k'tiva v'chatima tova! Loosely translated, that means, "Happy New Year, hope you get inscribed in the Book of Life, are you going to finish that bagel?"