It's not your parents' midlife crisis.

Hey, how's your midlife crisis going? Mine's great, thanks for asking. I can no longer read anything on my phone, my teeth are cracking by the day, I question every decision I've made since I was 21, oh -- and this is key -- I've taken to wearing a flower in my hair. Why? I have no idea, but my hair is like the only thing I've got going for me and so accenting it seems like a smart move. 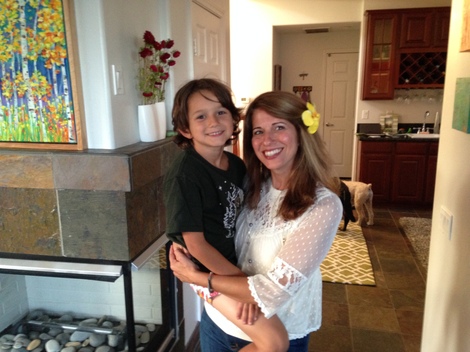 It's not your parents' midlife crisis, because your parents had kids way younger than you did, didn't subscribe to pop-psychology and generally didn't overthink anything. They didn't sit up late at night worrying if their parenting choices were ruining their kids. They didn't have access to 453 Facebook posts a day with conflicting ideas about how to self-improve and self-actualize. They were blissfully unaware those terms existed. They gave parenting and relationships about as much thought as they gave cars -- when it can't be fixed, get a new one.

But we had kids late. I just turned 44 and I have a 2nd grader. And I'm not alone. Some of you still have kids in preschool ... you know who you are. This compounds the midlife crisis, because instead of contemplating your halfway point of life with your kids off and gone, you are doing it and still going to Field Day. How are you still going to Field Day? I will be a stunning 55 when my youngest leaves for college. That's not empty nesting, that's crypt keeping. I'll give you a minute to do your math. (Spoiler Alert: You are going to be working until the day you die.)

Also, our generation loves "reading" self-help books on marriage and parenting. I use quotations around reading, because at best you've skimmed the dusty how-to books in your house. Most sit in a pile next to your bed that you'll get to as soon as you finish binging on Breaking Bad. I'll just say it: I never actually read a word of Chapman's The 5 Love Languages book until the other day. I realized I'd been telling people the wrong love language ... not that it mattered. It's Quality Time, in case you're curious. Whatever. Either way, I can assure you that our parents didn't give a crap about anyone's love language.

The reality is that the Modern Midlife Crisis is far more complex to solve. It's gonna take more than a convertible sports car and a one off at the Lamplighter Motel for this generation.

So what exactly is the Modern Midlife Crisis?
Well, according to me, and keep in mind I'm a blogger, writing this in my kitchen while drinking wine, it's a cross section of the following:
Vision and Teeth
The vision and the teeth cracking, although both correctible, are enough to catapult you directly into a midlife funk and make you doubt the very existence of a semi-intelligent god. I've often said that no omnipotent, or even Junior College smart, god would make teeth so weak and vulnerable. I'm never so sure there is no god than when I'm getting a fresh new crown. But, this is the least of your worries. I'm sure you look super sexy in your teeth grinding mouth guard. ~Cringe~

The Death Complex
Let's skip right to the death complex. The minute your parent dies, you take on their death age. Don't argue with me here unless you've been through it. I'm aware it makes no sense, but mine is 66. Which technically makes me long passed middle aged and in my twilight years, most of which will, apparently, be spent at field day. This thinking is exactly what sells wine.

But it's not so much knowing that you are going to die that makes the Modern Midlife Crisis modern, it's that you aren't allowed to be pissed off about aging anymore. You have to be thankful and write lists about how grateful you are on Facebook, that, and I'm sorry to be the one to say it, no one is reading. You have to "like" memes that reinforce that getting old is super awesome. You know what's super awesome? Being young. And if you complain about your age on your birthday, some jackass "someone has a case of the Mondays" saying asshole will say, "It sure beats the alternative." I wish someone would punch that person in the face.

Basically, we are all just sitting around waiting to get cancer... to find out which flavor we are queued up to fight and then tragically succumb to. It's like at high school reunions we used to ask each other what we did for a living and now we are like, "Hey, did you get your cancer yet?"

The Path Not Taken
But newsflash ... you are alive and well, so you can say goodbye to that pesky Midlife Crisis, right? Wrong. You have HGTV and they have a show called House Hunters International that exists only to show you how every single decision you have made up until this point has been wrong. People, people just like you, are buying houses in tropical locations. How, you wonder, how, is living and working from a beachfront house in Fiji an option in life? You start to realize that life is a series of choice and you, inexplicably, tragically, have chosen the suburbs. You recalculate the number of years until your youngest goes to college and remember that three college tuitions later you will not be moving to paradise, but downsizing into a condo near the Fuddrucker's by the mall.

Under Appreciation
After contemplating the death complex and the realization you are never going to visit Fiji, let alone live there, the under-appreciation thing seems trivial. But it's so not. Mainly, you are under-appreciated by your kids, but your spouse is probably sucking it up too. I know this because I'm sucking it up. After 20 years of marriage, my husband is like a lamp. He's around, every now and again I turn him on, but otherwise, he's just collecting dust in the corner. On a daily basis you do so much crap for other people who barely notice and rarely appreciate it, and although you signed on for it, you can't help but want to shout, "Hey, I'm a human being. I have feelings. Someone notice me!" Oh, they notice you every now and again. Try skipping a field day. There will be tears.

The Fix
So, if the Modern Midlife Crisis is more complicated than our parents' generation, what can we do to fix ours? Here's where it gets interesting. I have no flipping idea. But the wine is helping. Having irreverent, raw, honest, hilarious friends is helping. Writing fictional novels is helping. Wearing a flower in my hair is helping an illogical, disproportionate amount.

You know, maybe I'm overthinking this, just like my generation of self-help craving lunatics. I probably just need a convertible sports car and a one off at the Lamplighter Motel. But I'll still dream of Fiji ... and then, suddenly, someday, the flower in my hair will make tons of sense.

Top 10 Signs Of A Midlife Crisis