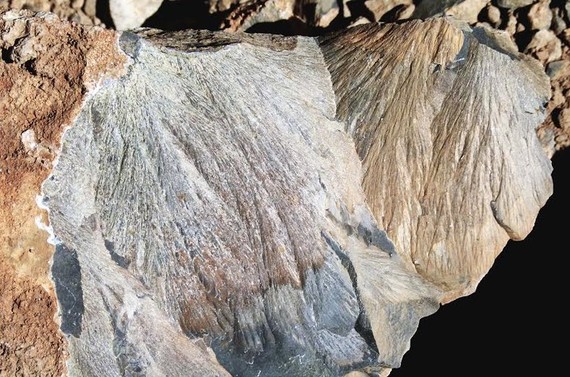 Morocco, and particularly its southern desert, is scattered with treasure that came from the skies: meteorites. These extraterrestrial rocks are up to 4.5 billion years old, approximately the age of our solar system, and offer vital clues about Earth's origins.

Large meteorite falls can be catastrophic. In contrast with small meteoritic fragments, larger objects are not decelerated by the atmosphere and hit the ground at a tremendous velocity. The collision forms what's called an impact structure. Scientists have identified about 189 impact structures around the world, such as Mexico's Chicxulub crater. This particular event is associated with the mass extinction of many species, including dinosaurs.

There are generally no remnant pieces of the large meteorite that causes such a structure: it is entirely molten or vaporised immediately after collision. Meteorites, then, are not usually found close to impact structures.

It means that two meteorites struck at the same place, possibly with an interval of millions of years. This is exceptional.

There are a few accepted criteria to claim for the discovery of an impact structure. It's not enough to spot a circular depression or crater, as other geological processes like volcanic and tectonic activity also form craters. The main criteria are the presence of shock deformation in rocks and shock deformation features that are so small they can only be seen under a microscope. Shock deformation in rocks may be accompanied by a phenomenon called shatter cones. These are curved fractures with diverging striations and can be seen with the naked eye. Shatter cones are created by the passage of the strong shock wave that's associated with meteoritic impacts.

In 2012 shatter cones and meteorites were both discovered close to Agoudal, which is one of the highest villages in Morocco. It is located where roads and tracks from the valleys of the Todra and the Dadès merge together. Meteorite fragments and shatter cones are scattered at several points around the village. Since the discovery, meteorite hunters and impact crater specialists have flocked to Agoudal.

We were among those who studied the area, examining the shatter cones and the dispersion of meteorite fragments. Once we knew that this was a large impact structure with meteorites lying on top of it, we wanted to find out whether the two events were related or not.

We mapped shatter cone occurrences and found that the impact structure had actually existed before the meteorite from which the fragments originated hit. This means there were two significant events at this spot in the North African nation's geological history. The first caused a large impact structure and potentially damaged the biosphere in a radius of several kilometres. The second left meteorite fragments scattered around the landscape.

Our research suggests that the two meteoritic events in question were separated by a long period of time.

So what cause this impact structure? A meteorite, probably. Its remains are long gone, vaporised when it hit the earth. Given the minimum size of the impact crater and the erosion rate in the region, it would take more than one million years to remove a 3 km depression from the landscape.

Then there was a second, smaller meteoritic impact event corresponding to the meteorite fragments found at Agoudal. This probably didn't form a crater. The meteorite was broken into hundreds of fragments as it entered the atmosphere. Small meteoritic fragments were decelerated by the atmospheric and hit the ground at a velocity that was not fast enough to form a crater or create shock deformation effects in the rocks.

Agoudal's treasure is double: it has meteorites and shatter cones, which are the only remnants of an eroded impact structure.

It's important for scientists to know how often and where meteorites from asteroids and comets hit the Earth. This helps us to understand the threat posed by these catastrophic events. The Agoudal meteoritic impacts add to broader scientific knowledge. A next step will be to study the local or regional consequences on biological activity at the time of the large impact, and how this event contributed to physically shaping the valley.