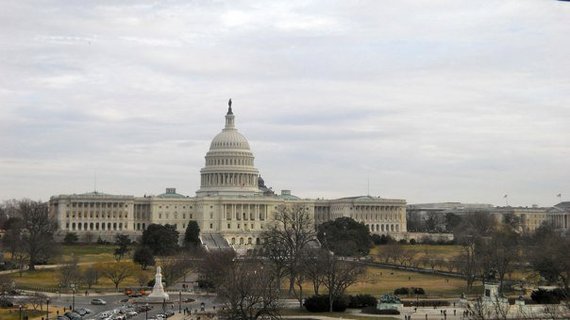 On Tuesday, when tens of millions of US voters go to the polls, they are very likely to deliver a US Senate majority to the Republican Party.

Six years into the administration of Democratic President Barack Obama and four years after the midterm elections that delivered control of the US House of Representatives to the Republicans and conservative Speaker John Boehner, most polls and poll aggregate forecasts give the Republicans anywhere from a strong (70 percent) to moderate (74 percent) to an overwhelming (96 percent) chance to retake the Senate.

It's not uncommon for the "six-year itch" to reward the non-presidential party with gains in midterm elections. Throughout the post-war era, in every midterm election during the second term of a reelection president, the opposition party has made gains each time -- with the exception of 1998, when the Democrats benefited from a strong economy and Republican overreach in pursuing what would eventually become impeachment hearings against US president Bill Clinton over alleged perjury in the Monica Lewinsky affair.

It's also not unheard of that foreign policy can drive larger narratives about presidencies.

Most recently, in 2006, Democrats recaptured both houses in midterm elections, forcing then-president George W. Bush to accept the resignation of his defense secretary Donald Rumsfeld, in light of the war in Iraq's unpopularity and the unfolding sectarian civil war taking place there despite US military occupation. As it turns out, the 2006 midterms paved the way for a much more moderate tone to the final two years of the Bush administration and a change in strategy under Robert Gates, Rumsfeld's successor, who ultimately stayed on as defense secretary until 2011, lending a sense of continuity to the Obama administration's approach to defense policy.

So what exactly would a Republican Senate mean for US foreign policy in the final two years of the Obama administration?

Probably not much -- and certainly not as much as the American electorate's rebuke of the Bush administration in 2006.

That's because the case against the Obama administration is less about foreign policy, or any one issue, than longstanding gripes about the slow pace of economic growth, ongoing unemployment and his handling of everything from the Ebola public health threat to the response to the growth of the Islamic State group in Syria and Iraq.

But that doesn't mean full Republican control of the legislative branch of the US government won't be entirely non-consequential.

The first, and most obvious, consequence is that the three committees with the most direct oversight into the conduct of US foreign policy will be chaired by Republicans:

Corker would replace New Jersey Democratic senator Robert Menendez, who hasn't been a particularly helpful chair to the Obama administration. Though Obama won't find in Corker a friendly ear on issues like Syria, Iran and the rise of the Islamic State group in Iraq and Syria, he certainly didn't find one in Menendez, the son of Cuban immigrants who has also opposed the Obama administration's overtures, however slight, to Cuba.

Corker and the Senate Republicans might easily be more skeptical of any deal reached over Iran's nuclear energy program (a key deadline is approaching at the end of November), push for ground troops or greater involvement in Syria and Iraq, and demand greater US support for Ukraine, Georgia and other emerging democracies within the post-Soviet orbit. But that's not incredibly different from Menendez's current perspective. While a Corker-led Foreign Relations Committee would tilt even more to the right, it's not going to be the difference between John Kerry or Joe Biden, on the one hand, and Jesse Helms, on the other hand. Corker, after all, was the key Republican voice in shaping the Dodd-Frank Act, the financial regulatory reforms that, among other things, created the US Consumer Financial Protection Bureau.

A Republican Senate also means greater oversight of everything from the controversial September 2012 attack on the US consulate in Benghazi and the handling of security by the US Department of State and the secretary of state at the time, Hillary Rodham Clinton, who will likely emerge within months as the front-running candidate for the 2016 Democratic presidential nomination. But it could also give Republicans a higher-profile perch from which to nudge the Obama administration toward more muscular action on Iran, Syria, Iraq and elsewhere. It could also mean more inquiry into USAID, the US Agency for International Aid, which has been the subject of several eyebrow-raising incidents over the past couple of years, including the creation of a bizarre Cuban Twitter program to the awarding of millions of dollars worth of contracts related to the Obama administration's Power Africa Initiative to an organization headed by former British prime minister Tony Blair.

None of that, however, is necessarily bad. Though greater oversight, especially regarding the Benghazi brouhaha, is motivated by politics, some of it falls within the nature of democratic checks and balances.

Corker, who has championed the need for Congress to vote on the Obama administration's military airstrikes against Islamic State in Syria and Iraq, over the weekend made a thoughtful call for greater US engagement in the world in an interview with his hometown newspaper, The Tennessean.

Nevertheless, Republican control in both houses of Congress might not actually be the worst thing for the Obama administration. It might actually be to Obama's advantage on two key issues -- trade and immigration.

As negotiations grind on for both the Trans-Pacific Partnership (TPP), a sprawling free-trade agreement among Asian, North American and South American countries and the Transatlantic Trade and Investment Partnership (TTIP), a deep, free-trade agreement between the United States and the European Union, a Republican-controlled Senate may provide to Obama the trade promotion authority that Democrats have not. That, in short, allows the Obama administration to more easily negotiate trade agreements, forcing Congress to then accept or reject the resulting trade accord, without room for amendments. Without that authority, the Obama administration is unlikely to conclude serious negotiations for either TPP or TTIP.

In both cases, the United States stands to gain greater GDP growth and more jobs from concluding the trade accords, and if either TPP or TTIP are finalized, they will rank among the top accomplishments of the Obama administration. While Senate Republicans might not want to deliver such a political gift to Obama, TPP and TTIP represent strong Republican priorities. Giving Obama 'fast-track' negotiation authority would also show that Republicans are serious about governing -- and not just using their new power to attack the Democrats.

Immigration reform has become something of a unicorn on Capitol Hill, a project that's been plausible for over a decade, going back to the Bush administration's strong pro-reform agenda in the mid-2000s, but that hasn't materialized. With Republicans in charge of both houses of Congress, however, they can credibly pass their own version of immigration reform and push the burden to the Democrats and the Obama administration. Boehner and other Republicans sympathetic to the business community, including former Massachusetts governor Mitt Romney, are already pushing Republicans to pass some variant of immigration reform.

As Latino voters become a stronger voice in national elections, it will be the last chance for Republicans to show that they can effect a real policy solution on this issue before the 2016 presidential election. No matter who gets to take the 'credit' for successful immigration reform, it should rank highly on the list of both Democratic and Republican agendas for the next Congress.