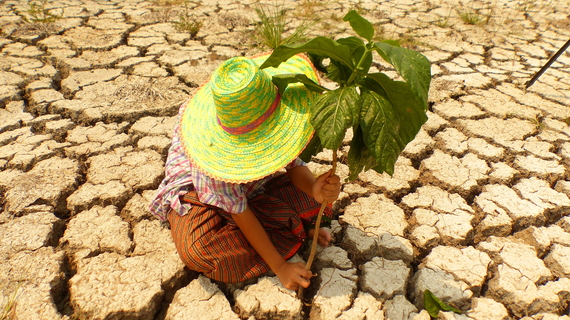 There is still much left to play out in the next 10 weeks when it comes to President-elect Donald Trump's foreign aid and global development policies but it is clear that soon the development community will be grappling with new policies, funding priorities (or lack thereof), and a new order that will change the way we all do the business of 'doing good' abroad.

Trump has been clear in letting the world know that his "America first" policies also mean that he would rather focus U.S. foreign aid on projects directly associated with what he perceives to be critically threatening to the United States, mainly terrorism and immigration. So that leaves us with a development agenda that is radically different than our current one. As we've witnessed through experience, foreign aid and global development policies have the potential to be more successful in addressing issues like terrorism when we take a multi-pronged approach that also addresses issues like global poverty, democracy, and human rights at their root levels.

On the development hit list: Our support of the United Nations, World Bank, and the U.S. Agency for International Development (USAID). At this stage, we could bet that development assistance will likely be positioned early on in the Trump administration as wasteful and corruption-ridden. USAID, long been considered by many conservatives, as an agency that should be eliminated, will likely take a hit in funding and staffing. Also, the question remains on whether the new administration will have the State Department absorb USAID or if it will remain an independent agency. The United Nations and the World Bank may be characterized as bureaucratically broken and ineffective, therefore less worthy of time and financial investments.

While it has been made abundantly clear that climate change initiatives will not be a focus, as Trump has told us he'll cancel U.S. participation in the Paris Agreement, there are other areas that will likely take a hit. Current priority areas like global poverty alleviation, open society projects, women and girls empowerment projects, human rights initiatives, and our overall commitment to the Sustainable Development Goals (SDGs), will likely be limited on a light development agenda. Strategy will likely be more focused on continued but reduced emergency humanitarian response, violent extremism and terrorism, and potentially, the encouragement of private-sector investments in developing countries. Feed the Future, President Obama's foreign food security initiative and Power Africa, an energy access project, are examples of how private investment in foreign aid programs can work, and they are both backed by Congress. It will be tremendously important for the Trump administration (and a Republican-controlled Congress), to thoroughly review their unfolding development agenda and see how this wide range of current policies and priorities can positively contribute to a multi-pronged approach to foreign policy goals versus just cherry-picked conservative development priorities. It will be also critical to take a long, hard look into what recent development and foreign aid practices have shown real impact and sustainability and to follow through on the commitments that are really moving the needle. To be clear, U.S. foreign aid spending is less than one percent of the U.S. federal budget.

On a hopeful note, there is still a likelihood that many important programs will remain in place. We must remember that some of the larger development initiatives like Millennium Challenge Corp., and the President's Emergency Fund for AIDS Relief were established under a Republican presidency. Also, the policy landscape and a President's stance on it, can quickly shift once a President is actually in office; once meetings are set with other heads of state, the positive realities and pressures of collaboration come to light.

At minimum, establishing a new development and foreign aid agenda doesn't need a complete overhaul in order to meet the conservative values and priorities that are soon to be laid out. What that truly needs (and should always require, regardless of what side of the aisle you're on) is for the incoming set of development administrators to give a careful, thoughtful, thorough investigation of what policies and financial investments are working as well as how new leadership and direction can better actualize these existing achievements. Alternately, it is also important to note how the elimination of these programs would affect our foreign policy goals in the short and long term. An attempt at this type of balanced perspective would be our best chance at articulating a new American agenda to ourselves and to the world.