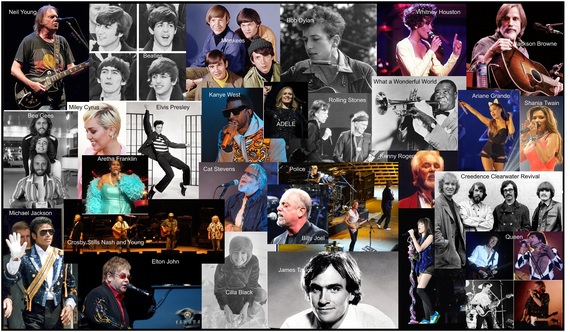 The 1st round of the 59th Annual Grammy Awards is now over. For Grammy members who have had their latest albums submitted for an Award, the nail biting begins. Members from around the world have filled in their official ballots with their choices and now will have to wait patiently until early December to find out whether their picks have been chosen for a coveted Grammy Nomination. All of us know the odds, but we spend our time (in spite of the long odds) writing and producing albums, not so much for the glory of winning but more because of our deep abiding passion for music. So sit back while you wait and enjoy a tale of passion and intrigue.

"Music is a moral law. It gives soul to the universe, wings to the mind, and flight to the imagination." Plato

A friend came to me Yesterday, and told me All You Need is Love. Well It was One Sweet Day and I knew I Just Wanted to be Your Everything. I had a touch of Night Fever and felt it wouldn't be long before Another One Bites The Dust, so it was vital for me to Apologize knowing I'm A Believer and that We Can Work It Out. Truthfully I'm a pretty Smooth guy and never one to fool around with other people's emotions, so I suggested that we play a game called Foolish Games knowing in the back of my mind that I Will Always Love You

The rules are simple, and it just takes 2 to play. You start by Tumbling Dice and adding a spoonful of Brown Sugar, and then You Start Me Up understanding that You Can't Always get What You Want. After long languorous weeks in the sun I announced to my partner, "Let's Spend the Night Together," We found Satisfaction in a Villa in The South of France, and lying in bed looking into one another's eyes I said to her, "Are You Lonesome Tonight," She replied "Call Me Maybe." (I'll call her Maybe maybe, although her name is actually Billie Jean)

For the next 6 months we played the game constantly. I became her Daydream Believer and she became my everything, and I told her You're My World. I asked her to Help as we spent every hour in each other's company. Then suddenly, without warning She Walked Out The Door Right Out Of My Life.........

I concentrated on Stayin' Alive but finally broke down and picked up the phone and called my Lady who accused me immediately of being a Gold Digger. Deeply offended I responded saying, "You hussy, you playboy Centerfold. With a demur chuckle she answered Don't Think Twice It's Alright and I suddenly realized. Wow It's Just Like Starting Over, I felt like I was Blowing In the Wind to which she answered angrily..."well That's What Friends Are For. You and I are like Fire and Rain and she slammed the phone down

Every Breath You Take is still like a knife to my heart, I thought to myself What A Feeling. When I'm Rolling In The Deep or writing some Iambic Pentameter I generally discover that if I've been Tossin' Or Turnin' or singing some other Silly Love Songs I become unusually hungry, and need a snack. I find my mind wandering like a Candle In The Wind knowing always that I Want To Hold Your Hand while I'm Shadow Dancing because I'm trying to stand Side to Side as I eat my snack by the fridge. It's all quite confusing really, but at least it makes perfect sense to me.

I was never the same after we broke up. I Heard it Through The Grapevine, that Billie Jean had found someone new, and just a month ago I received a text from her with just 3 bitter words that said simply: "You're So Vain.I immediately shot back a 4-word manifesto. "You're Still the One. "That'll teach her." I thought.

A great song can't be written One Moment In Time. It's always about Respect and with patience I could become a Party Rock Anthem It's important to understand How I Live, when I've Got A Feeling that just won't quit, especially when things turn Physical. You see...when I look into your eyes I realize that You Light Up My Life, you're My Girl, my sweet little Doo Wah Diddy Diddy because I can't Imagine life without you. I've been Running On Empty for so long now that without question We Belong Together. You're my Uptown Funk baby my little Ruby Tuesday. You'll never Unbreak My Heart, oh you with those Betty Davis Eyes.You're my sweet lovin' Dock of the Bay, My Girl, but God Only Knows, that When a Man Loves a Woman There Ain't No Mountain High Enough, but baby You Are the Sunshine of My Life, my True Colors so I Say a Little Prayer. for you ...Sadly though........the harder I tried, the more I realized. Our love was dead.

Life went back to normal, and became an American Pie moment. I started to write again, at first depressing poems about lost love but finally coming to a point of being proud of my work again. I wrote a new song that was (little did I know it at the time) going to change my life. I spent All Night Long writing it and knew...yes I really knew that this song was THE one. OH BABY BABY It's a Wild World and then I realized that We Will Rock You, because as the great poet Wordsworth once said, She's Only a Woman To Me. I was drawn to a frenetic emotion...... slipping away, wanting as always to Keep On Rocking in the Free World, but then with out warning I bounced back and suddenly was singing You Raise Me Up. Wow...it truly is a Wonderful World

Good luck dear GRAMMY friends and colleagues. May your songs be great, your dreams come true, and your passions remain strong. One of the songs we mentioned in our little story will hopefully bear your name one day. Keep writing, keep dreaming. Music Matters.