You could feel it in the air during last April's historic tipi encampment on the National Mall in Washington, DC, and the feeling is even stronger today: "We've got this. Keystone North is not going through."

We cannot let up until Keystone North is vanquished, but all signs continue to point to the president nixing TransCanada's cross-border permit. The latest flashing sign is a White House promise to veto a Keystone pipeline bill just passed by Congress.

During his recent State of the Union Address, President Obama did not mention Keystone by name. He didn't have to. Everyone knew he was talking about Keystone XL's northern leg when he called on Democrats and Republicans to "set our sights higher than a single oil pipeline."

He also said "no challenge - no challenge - poses a greater threat to future generations than climate change." For a president so clearly concerned about his climate legacy, he knows that approving Keystone North would destroy it.

Remember the 485-mile southern leg of the Keystone XL pipeline the president gift-wrapped for TransCanada back in 2012? Well, TransCanada completed it about this time last year and has since used it to transport toxic tar sludge all the way from Alberta to Texas. TransCanada's CEO, Russell Girling, boasted as much to a reporter last February:

Please let that sink in for a minute. 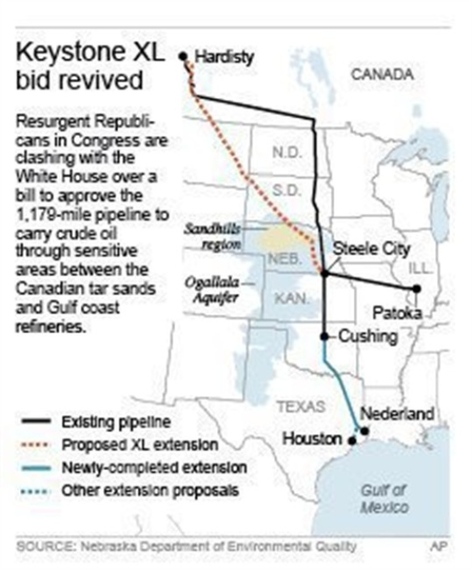 The map above shows why Keystone South (the solid teal line at the bottom, completed in 2014) was an even bigger play for Big Oil than Keystone North (the dotted red line at the top). Linking Keystone South to Keystone 1 (the black line, built in 2010), gave TransCanada what they wanted most: a straight shot from the minefields of "Mordor" to refineries on the Gulf Coast.

With 70 percent of the capacity of Keystone North, Keystone South has the ability - even without Keystone North - to transport more than half a million barrels of toxic tar sludge daily from Canada to Texas.

In June of 2013, the president said, "Our national interest will be served only if this project does not significantly exacerbate the problem of carbon pollution." Last week, the president's own EPA informed him the pipeline would indeed cause a "significant increase in greenhouse gas emissions." The climate test President Obama set for Keystone applies equally to Keystone North and Keystone South.

As if any more reasons were needed to shut down Keystone South, here are some:

•TransCanada's built-to-spill Keystone South now lies buried in the backyards of pipeline fighters like David Daniel, Julia Trigg Crawford, Michael Bishop and Eleanor Fairchild, where a recent plague of earthquakes in Texas and Oklahoma could release its black venom into waterways and the Carrizo-Wilcox Aquifer at any time.

•Keystone South is perpetuating scorched earth extraction of tar sludge in Canada, where First Nations and the Métis are suffering what has been termed a "slow industrial genocide," with many people dying from cancer caused by industrial heavy metal contamination of traditional foods.

•Keystone South was ruthlessly rammed through tribal and ancestral lands in Oklahoma without adequate consultation to protect sacred sites and other tribal interests.

•Keystone South's toxic cargo will be processed in petrochemical refineries across the fence from where children play in Port Arthur and Houston, resulting in even more poison raining down on these communities of color.

It is not enough for President Obama to deny a cross-border permit for Keystone North. If he truly believes the greatest threat facing future generations is global meltdown, he must put forth a real climate action plan that includes shutting down Keystone South and all tar sludge pipelines crossing our border, and preventing the industry from establishing a beachhead in Utah's red rocks country.

As the editor of BuzzFlash at Truthout reminded everyone in 2013: "When Obama approved what is known as the southern leg of the pipeline, the spigot was opened to transport the climate-killing tar sands oil to refineries and ports in Texas." That spigot must now be closed.