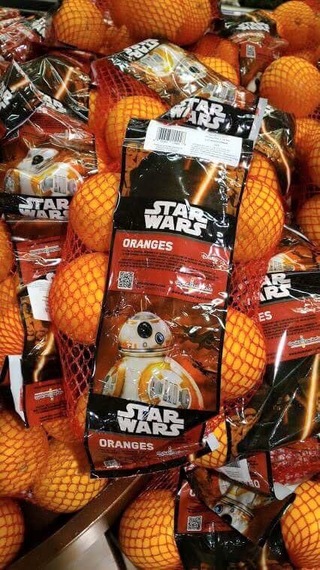 As the 1.6-billion-dollar box office epic Star Wars: The Force Awakens begins to fade from the public eye, so also have the Star Wars-themed brands lining the shelves. I find myself at a loss in the fruit aisle, the pharmacy, the Verizon store, the Chrysler dealership. What kind of oranges should I buy, if not Star Wars? Do I need to worry about these batteries disturbing the force? Will this colorlicious lipstick put me on the dark side?

From a marketing perspective, it's been fascinating to watch. Traditionally, partnerships, sponsorships, and merchandizing (to an extent) should reinforce the core values of the brand, make sense within the brand narrative, and reflect positively on both parties. In other words, your brain should at least be able to draw a vague line of connection between the product and the partner.

In choosing its seven official marketing partners, Lucasfilm has not made this easy. We've seen creative leaps of delightful magnitude in marketing by Subway, Fiat Chrysler, and Hewlett Packer Enterprises. Thanks to these companies, we can now enjoy "Galactic Goodness" on 9-Grain Honey Oat, join "the Dodge Side," and type like we're a citizen of Coruscant. CoverGirl's limited edition Stormtrooper mascara, lipstick, and nail polish line inspired Steven Colbert to release a segment titled "May the Forced Marketing Integration Be With You."

As Lywn Brennan, general manager of Lucasfilm, said in August, "Our partners have all delivered original, stand-out campaigns that capture the familiar fun and excitement of our galaxy far, far away that we hope will delight fans as they get ready to experience Star Wars: The Force Awakens."

But make no mistake -- General Mills is a galaxy far far away from the planet Jakku.

Many of these product tie-ins may be too random to drive significant impact. But there are other risks associated with this type of mass branding. In a sea of Star Wars, how do you ensure your product breaks through? How do you know if The Force Awakens is strong enough to drive sell-through, esp. in the absence of logical relevancy? Or, what's most interesting to me: how does Lucasfilm know its rampant commercialism isn't cheapening the brand?

Take something like Angry Birds -- another brand that chased massive global licensing deals, unleashing Angry Birds credit cards, fruit snacks, duct tape, and everything from Angry Birds Han Solo Koosh Ball launchers to remote controlled balloon toys. In our corporate-critical world, this type of activity is vilified -- it's selling out. Over-commercializing can also degrade a product's "perceived value" -- or how much a consumer perceives a brand to be worth. In product marketing, high perceived value is key to brand longevity and brand love -- neither of which Angry Birds maintains today.

So all of this begs the question: how is Star Wars defying this marketing logic? Why isn't anyone turned off by the shameless merchandising, senseless sponsorships, and egregious product pairings that should, in theory, dilute and cheapen the brand? Why aren't we hearing any grumblings from consumers or critics about The Force Awakens?

The answer? People just love Star Wars that much.

When it comes to cereal -- we're bringing the Force to our breakfast tables with Yoda Lucky Charms. The John Williams soundtrack over a tube of black nail polish is music to our ears. And a soothing voice assuring: "few things feel like the first time you saw Star Wars" over video footage of a white Chrysler minivan? Not concerned with how little that makes sense.