My mother is a feminist, not just in word, but in every aspect of her life. She didn't wear makeup or skirts very often when I was a child. We carried green and white picket signs and chanted ERA,Yes! while walking in circles, my little legs tired and my brain bored to death. I didn't see why we had to do this on Saturdays instead of going to the park.

She gave me books about famous women and told me I could grow up to be anything I wanted. Of course I could, I knew that. I was every bit as good as any stupid, smelly boy. Why did she have to make a big deal out of it?

I rested my head on my mother's shoulder every night, mulling over the confusing words on her sleep shirt: 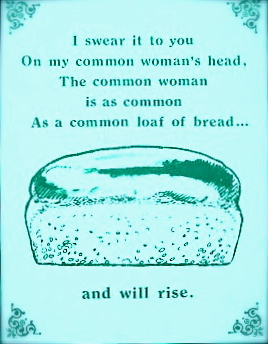 I wanted to be pretty. I wanted to be a princess and I hated that my hair was short and practical instead of long and tied with ribbons. I didn't understand what all these protest marches she dragged me to were about. Feminism wasn't necessary in my young head -- it was just common sense, both the way the world should work and the way I witnessed it working. I didn't realize I was standing on her shoulders, enjoying the fruits of her political labor.

When my mother told me that she wasn't allowed to wear jeans to school, I couldn't believe it. That was so un-American, I thought. You couldn't force girls to wear skirts in the winter just because they were girls. It made no sense. Teachers didn't treat boys any differently at my school. No one I knew thought women were inferior. I dismissed the skirt/jeans evidence as too perplexing to think about.

While I understood the history of women and the need for the feminist movement as I got older, It still didn't really sink in until I started watching AMC's series "Mad Men."

The show, set in an advertising office in the 1960s, made the day-to-day sexism my mother fought against perfectly clear to me for the first time. The leers, the innuendo, the butt-grabbing my mother talked about was suddenly in Technicolor. Women were mostly working towards their M.R.S., not a career. Top jobs weren't open to women, no matter how smart and capable they were. Women were there to wait on men. Suddenly, I understood what my mother had been trying to tell me for so long.

I have the freedoms and assumptions of equality only because my mother, and others like her, fought for them for me. It took an army of women to force this country into the society I was born into and took for granted, which, while not perfect, is far more equal than the one my mother was raised in. I'm forty, educated, and intelligent, yet it took a prime time TV show for the battle of feminism to really strike home.