WASHINGTON -- While some pollsters and journalists have recently argued that "voters are stupid," a new national survey shows that most Americans can, in fact, identify the relative positions of the Democratic and Republican parties on a series of important issues.

The Pew Research Center has measured knowledge of current affairs by the general public for decades. Past surveys have found an awareness of some very basic facts among American adults -- such as an ability to identify Hillary Clinton as the secretary of state or Muammar Gaddafi as the onetime leader of Libya -- but less knowledge about the details of politics in Washington. Late last year, for example, just 43 percent knew that Republicans have a majority in the House of Representatives but not the Senate.

The latest Pew Research News IQ survey, conducted March 29 to April 1, focuses more directly on Americans' knowledge of the views of the major political parties and the partisan affiliations of well-known political leaders. The survey finds that majorities of Americans can identify Democratic and Republican positions on several key issues.

The Pew report does note "considerable variance" in the survey's measures of political knowledge. On the higher side, 71 percent chose the Republicans when asked which party "is considered the more conservative party on most political issues" and 67 percent chose the Democrats as the party that supports "increasing taxes on higher income people to reduce the federal budget deficit." However, only 53 percent identified Republicans as the party generally more supportive of "reducing the size and scope of the federal government." 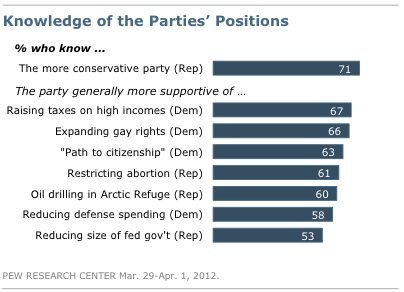 The survey also finds some significant partisan differences, suggesting that some of these questions may be measuring respondents' judgments about the performance of the parties as much as their knowledge of the parties. For example, just 46 percent of Democrats chose the Republican Party as the one more supportive of reducing the size and scope of government, compared to 76 percent of Republicans. That difference may indicate that some Democrats have come to see little current difference between the parties on cutting government, despite the historic commitment of Republicans to that goal.

While that particular question produced the largest partisan difference, the survey finds that Republicans are generally more apt to answer knowledge questions correctly, something the report notes is "typically the case in surveys about political knowledge." The reason is demographics. "On average," the report explains, "Republicans are older and more affluent than either Democrats or independents, and both of these are associated with knowledge about the parties' positions and leaders."

A second set of questions concerning the partisan affiliation of political leaders may provide a less complex measurement of knowledge. The results show most Americans can correctly name the party of two fairly recent former presidents. Specifically, 85 percent identified Ronald Reagan as a Republican, and 84 percent identified Bill Clinton as a Democrat. Far fewer, however, knew that House Minority Leader Nancy Pelosi is a Democrat (61 percent) or that House Speaker John Boehner is a Republican (55 percent). 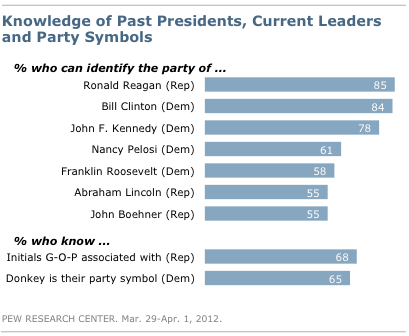 Of course, these results are for all adults. The report did not break out data for past or likely voters, but earlier research shows a strong relationship between political participation and these sorts of political knowledge.

In response to a request from The Huffington Post, Pew Research shared tabulations of the results by party registration. 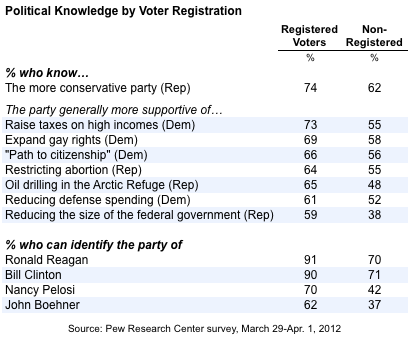 White the debate over whether voters are rational or "stupid" is certainly larger than this one limited survey, the results do indicate that most voters are familiar with some of the key differences between the two parties.

The results also highlight the sizable minority of Americans who are disengaged from the day-to-day details of politics and illustrate the obstacles facing political campaigns and others seeking to mobilize potential supporters and increase voter turnout.