The general election stage is now set with Hillary Clinton and Donald Trump as the presumptive nominees. What might we expect during this phase from the Democratic campaign, particularly when Clinton and Trump first meet for a debate showdown? Is Clinton's latest "love and hope" ad foreshadowing greater emphasis on an inspiring vision for America, not just a policy agenda or reasons to reject a Trump presidency?

I hope so. Here's why -- and why it should include an idea that deserves to be at the heart of any Democratic candidacy for presidency: dignity.

Let's first assess the ideas conveyed by the Democratic candidates so far, using their primary debates as a case study. In March, FiveThirtyEight posted a debate analysis of the personally distinctive phrases most used by the candidates, which led its author to conclude "Sanders is the protest candidate" while "Clinton is the candidate of action."

When I categorized each phrase -- as expressing a vision for America, whether affirming aspirational aspects or nixing dystopian ones; signaling an action taken or planned to achieve the vision (or action to condemn), such as a policy prescription; or neither--a slightly different interpretation emerged. The primary contrast revealed is vision versus action, "I have a dream" versus "I have a plan," poetry in campaigning versus prose in governing. 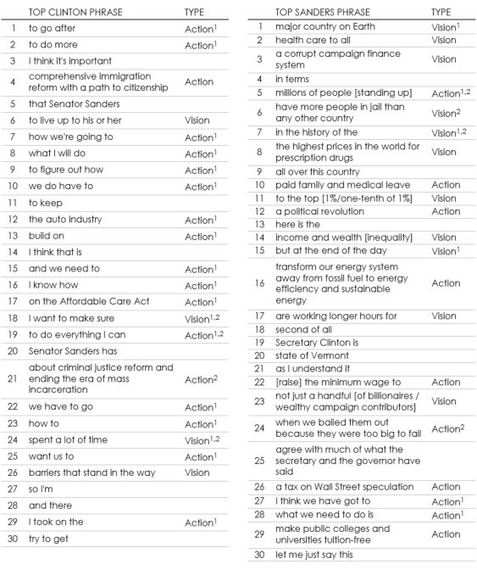 Table caption: Source of the Democratic candidates' top 30 phrases with the highest "term frequency-inverse document frequency" (TF-IDF) scores is Milo Beckman at FiveThirtyEight. (Beckman's source code for scoring the Republican candidates is available here; his methodology for the Democratic candidates is assumed to be the same.) Categorization of each phrase is by the author. Note: "1" indicates that the phrase is deemed to convey action or vision in an indirect, implied, incomplete, or introductory manner, rather than in a direct or self-contained way. "2" indicates that the category assigned may be especially debatable due to subjective interpretation. For reading clarity, the unscored words preceding or following several of the scored phrases were added to the table.

According to these results, Clinton's debate messages are indeed dominated by action while Sanders' are more evenly divided between action and vision.

Some caveats are in order. To be clear, this analysis says nothing about the wisdom, feasibility, or desirability of each listed phrase. The categorizations themselves may also be debatable, especially those based on context. (For transcripts, see: October 13; November 14; December 19; January 17; February 4; February 11; March 6; March 9.) Moreover, the original linguistic metric is tricky. It tends to highlight messaging contrast rather than convergence, for one; to illustrate, both candidates stressed the minimum wage as a priority but talked about it differently. And of course, what they uttered isn't necessarily what different audiences heard.

To state what's obvious more broadly, a presidential campaign's primary and general election strategies can't be presumed to be one and the same. Clinton and Sanders also face different hurdles during the primary; women leaders, for instance, shoulder higher burdens to establish and exude competence while suffering social trade-offs in doing so.

That said, the analysis is consistent with commentary arguing that Clinton's command of policy complexities tends to overshadow the underlying values while Sanders' penchant for expansive themes leaves skeptics asking for more detail.

That's not to say Clinton hasn't long talked about values like "love and kindness," or that the Sanders campaign hasn't set forth wonky plans like a climate change agenda. But even their campaign slogans embody the action versus vision dichotomy: Clinton's tagline is "Fighting For Us" (which addresses process and for whom but not what to achieve and why) and Sanders' is "A Future to Believe In" (which articulates why but not how).

For national leaders, capturing a compelling vision in the "why" is pivotally important -- even as it must be backed up with mastery of the "what" and "how." It's also good strategy for winning elections. As Gallup recently reported, "across candidates, the leadership strengths most highly correlated with likelihood to vote for a given candidate were inspiring, cares about individuals, visionary and courageous."

Gallup's related polling shows how much work, and opportunity, exists there for the Clinton campaign. What I personally hope to hear from the Democratic nominee in meeting the challenge are answers to "why" that speak to how dignity should be recognized and upheld in the 21st century. More than just barriers to people realizing their potential, or the breathtaking possibilities of America as the wealthiest country in the world, or love and kindness, which are not the values immediately evoked by "Fighting For Us." Human dignity.

I leave to others to hammer out how Clinton's candidacy, or Sanders' for that matter, already comports with the concept and how successful the effort would be given voters' pre-existing perceptions. But I will say generally that given the hunger for self-worth and respect out there in people from all walks of life, the idea would resonate with varied audiences today.

Bound to a shared vision for America, it could help deepen the kind of unifying appeals demanded by general elections: the greatness of our country's ideals exemplified by basic respect for people's humanity and worth, regardless of what they look like, how much money they have, where they pray, or where they were born.

Dignity already looms large in legal systems and major religions, but it also lurks in many of the great causes of our time. Consider why a nation would want to guarantee a decent standard of living for all, create redemptive second chances in the criminal justice system, or redress the institutionalized humiliation faced by the poor, racial minority groups, and other marginalized communities. And it's not always about the dignity of others; sometimes we reject dehumanizing means, like torture, to deal with those who seem like monsters because we're not.

As an interpretive lens, the idea could further help explain why folks who feel stripped of their own dignity -- discarded, disrespected, and disempowered, for reasons rousing sympathy or not -- gravitate towards figures like Donald Trump who flex political muscle by punching down in a seemingly zero-sum game. Identifying with that brute power to rearrange "winners" and "losers," shown in flashy defiance of his party's disciplinary grip, can be a way to restore one's lost status and respect.

Exposing the humiliations inflicted by politicians also carries force, because people tend not to forget such transgressions against their dignity. That's why the effective #NeverTrump response from Mitt Romney wasn't what he said but what writer Alexandra Petri suggested: "I know Donald. He's laughing at all of you."

That Trump would misuse public office to denigrate entire swaths of people makes him just a tremendous foil for a thoughtfully crafted platform on dignity. But it's not enough to repudiate. It's also definitely not enough to simply repeat the word, which risks it decaying into trite, meaningless filler.

Instead, what clarity and credibility can voters expect from our elected leaders to deliver results on one of the ultimate answers to "why" in policy-making--so that people can live in dignity?

As Nelson Mandela put it, "vision without action is just a dream, action without vision just passes the time, and vision with action can change the world." Progress depends on both. This year's general election is golden time to tell and show voters exactly that.