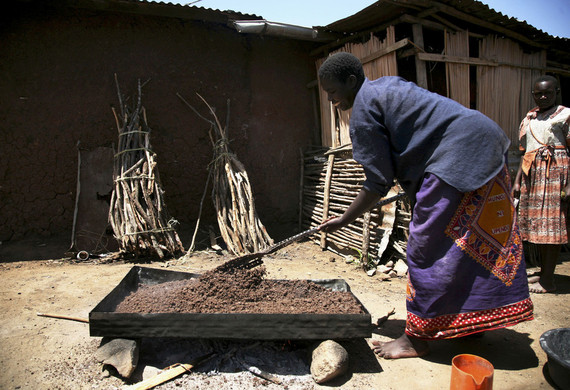 Humans may not know it, but we are full of lactic acid bacteria. It may sound scary, but these bacteria make up a significant component of any healthy person's gastrointestinal tract. They are responsible for fermenting food as it passes through the gut, particularly in the intestines.

Fermentation perpetuates the growth of beneficial microbes called probiotics. These live microbes beneficially affect the host - in this case, people - by improving its intestinal microbial balance.

Of course not all fermentation happens inside the body. It is also the oldest food preservation technique on record. Now scientists like myself are looking to fermentation techniques that have been practised all over Africa for centuries to better understand these important, healthy probiotics.

Africans have long consumed fermented foods. The continent is the cradle of humankind, so this ancient technology may very likely have originated in Africa as cavemen started collecting and storing food.

People in Africa usually ferment mainly cereal-based foods like sorghum, millet and maize; roots such as cassava; fruits; vegetables, though less commonly; and, to a lesser extent, meat and fish.

Two of southern Africa's most popular fermented products are amasi, or sour milk, and amahewu, a non-alcoholic fermented maize drink. Amasi is mainly produced by spontaneous fermentation of milk. Amahewu is produced by spontaneous fermentation of cooked maize or sorghum meal. There's also incwancwa, a sour porridge made from maize or sorghum gruel. This is allowed to spontaneously ferment to improve and develop palatability, flavour and nutrition. It's then cooked.

Other popular fermented products from this region include umqombothi or sorghum beer that is made from cooked maize or sorghum by wild yeast fermentation; a Zimbabwean traditional sorghum beer called chibuku; and a trio of traditional Zambian non-alcoholic beverages called mabisi, munkoyo and chibwantu.

In Nigeria and elsewhere in West Africa, ogi, iru and gari are three traditional fermented foods that are still produced in households today. Ogi is a fermented product of cooked maize or sorghum or millet grains. Iru is a fermented product of African locust bean, and gari is a fermented cassava product. Gari is made by peeling fresh roots and grating them into mash before putting them into sacks for fermentation. Borde and shamita are two of Ethiopia's important traditional fermented beverages. They're produced through overnight fermentation of certain cooked cereals.

These foods and drinks are treasured: both for nutritional purposes and cultural practices. African families still provide amahewu and umqombothi during ceremonies like traditional weddings as a treat for their guests. The non-alcoholic foods and beverages are used for weaning children and to refresh adults.

But there's far more to these fermented foods than a good meal. They offer scientists some important insights into just how such foods encourage the growth of probiotics and how this keeps people healthy. Africans' ancestors were onto something - and the continent's increasingly urban populations should follow their example.

The probiotic microbes associated with fermented foods are hugely beneficial. They degrade anti-nutritional substances like mycotoxins and phytic acid.

The abundant probiotics in fermented food also improve digestion and the production of nutrients, like vitamins. Probiotic microbes inhibit the growth of food spoilers and can both prevent and treat diarrhoea. They inhibit tooth decay, can help to manage some types of diabetes and some have been proved to reduce "bad" cholesterol.

It stands to reason that all of these benefits helped African communities who didn't have access to antibiotics. Just because we now live in a world where antibiotics are increasingly available doesn't mean the old ways are irrelevant.