What can we learn from The Martian, a best-selling novel and movie starring Matt Damon as an Astronaut in the not too distant future thought dead and left behind on Mars during a violent dust storm? It was the highest grossing movie last weekend. How did he survive on such an inhospitable planet where nothing grows and water isn't accessible?

It could tell us how we might survive -- and even prosper -- in the not too distant future on earth. It is a lesson very close to home in several ways. We have predictions that global warming could have catastrophic economic and environmental consequences from such as the Pentagon, with cities within 100 miles of coastlines affected and maybe even obliterated in the not too distant future.

As many parts of the earth experience climactic changes that could bring about similar conditions as on Mars (no living organisms, too little usable water, and violent storms), we can learn just how to rescue earthlings from a similar result.

It was because the U.S. and world, including China (sending up a rocket with additional supplies), were united in wanting to save Matt Damon that The Martian has a happy ending. And that is exactly how we have to act to save ourselves from becoming another Mars.

Is this too severe a picture of what could happen on earth? The New York Times reported on the latest Pentagon study of the effects of global warming, asserting that climate change poses an immediate threat to national security, with increased risks from terrorism, infectious disease, global poverty and food shortages. It also predicted a rising demand for military disaster responses as extreme weather creates more global humanitarian crises.

The report lays out a road map to show how the military will adapt to rising sea levels, more violent storms and widespread droughts, said the Times.

'The loss of glaciers will strain water supplies in several areas of our hemisphere,' said U.S. Defense Secretary Chuck Hagel in announcing the report last year. 'Destruction and devastation from hurricanes can sow the seeds for instability. Droughts and crop failures can leave millions of people without any lifeline, and trigger waves of mass migration.'

In fact, this is already happening in the Middle East. Record droughts are a major reason for the civil wars and migration of millions into Europe and beyond. It can only be "saved" with cooperation from all sides of the Middle East conflict, including Russia.

And China is buying up foreign resources because it will ultimately run out of enough water and arable land to feed its own growing population.

The Martian was rescued as a result of our government-funded National Aeronautics and Space Administration -- NASA -- that was responsible for our Apollo moon landings, the International Space Station, and now the Mars Rover and Curiosity remote vehicle explorations.

Closer to home, $700B was authorized by Congress in TARP support of Wall Street and commercial banks, then another $830B for the American Recovery and Reinvestment Act that enabled governments to continue to function, which prevented another Great Depression. 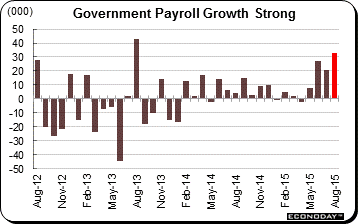 We lost more than 800,000 government jobs during the Great Recession, of which only a small fraction have returned. This is due to government spending cuts because of reduced tax revenues, but also congressional resistance to expanding federal government spending when this is the time to invest public monies that will spur demand when the private sector will not.

Need we more lessons on how to save our own planet? The Martian, a tale of survival under impossible circumstances, provides an immediate lesson that has already caught the attention of many. This has to be why it has become a best-selling novel and movie.