It is frequently said that it is only human nature to fear the unknown, to assume the worst of the unfamiliar. Perhaps no group of people is more familiar with this tendency than the furry community.

For most in the general public, their knowledge of furries — individuals who share an interest in fictional animal characters that walk and talk like humans — stems from a 2001 Vanity Fair article, a 2001 episode of MTV’s “Sex 2k” show or a 2003 episode of “CSI,” all of which presented the community as a sex-focused subculture, a sort of fetish community.

But furry enthusiasts say those media portrayals have told a misleading story about furry fandom, focusing on extreme behaviors of some members of the community while ignoring more mundane, less sensational elements. 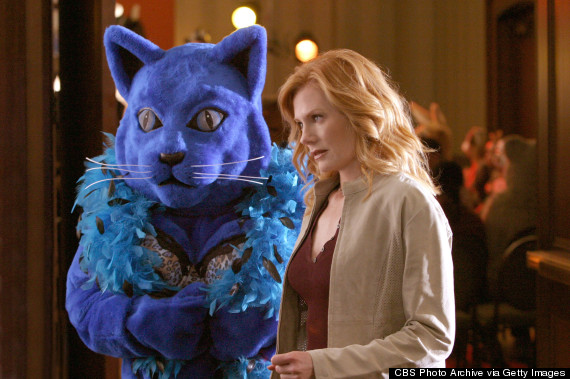 Last week, furries were back in the headlines when 19 people were taken to the hospital due to a chlorine gas leak at Midwest FurFest, an annual Chicago-area furry convention that attracts thousands of participants. Photos of participants wearing full-body fursuits ran as one of the Chicago area’s biggest local stories and the incident received picked up national coverage as well.

Though most of that coverage was relatively straightforward, MSNBC host Mika Brzezinski was the subject of more headlines when she burst into laughter and ran off the set after she apparently learned about furry fandom live on the air.

Contrary to what one might guess based on past media portrayals, a dramatic reaction like Brzezinski’s to furry fandom tends to be the exception, rather than the rule these days, furry fans recently told The Huffington Post.

“In my experience, most of the time when real people meet real furries you get smiles, and general amusement,” said Laurence Parry, a London-based “furry fan” also known as GreenReaper.

Parry is the editor-in-chief of Flayrah, a furry-centric news website, as well as the lead administrator of WikiFur.com, a furry encyclopedia, and Inkbunny.net, an online gallery of furry art. As Parry sees it, many individuals outside of the community reduce furry fandom to either being “about kinky sex” or about “believing you’re an animal.” Such a belief, Parry explains, would be like believing “Star Trek” fandom is solely about dressing in “Trek”-inspired costumes or that “surgery is all about the scrubs.”

“In reality, furries are fans of a concept: ‘What if intelligent animals lived among us, or replaced us?’ From this, all else flows — art, crafts, stories, roleplaying and costuming,” Parry explained.

Demographically, the furry community isn’t too different from the fantasy and science fiction fandom communities from which it is an outgrowth.

Furries exhibit their interest in a number of ways, ranging from online-only interactions or role-playing with other furries -- often using an avatar-based “fursona,” like a wolf, fox or cat, as one’s identity -- to wearing costumes as simple as animal ears and a tail or as complex as a complete, elaborate fursuit worn at conventions.

The advent of the Internet in the late ‘90s was a major factor in the growth of furry communities and the many gatherings organized for and by community members, the first of which was actually held in 1989.

Today, Parry said most conventions are enjoying continual growth of the number of participants and many new events continue to be created. Despite the gas leak, Midwest FurFest chairman Toby Murono told HuffPost in a statement that the convention attracted its highest attendance to date this year — 4,600 attendees from 15 different countries.

According to the most recent data from the Anthropomorphic Research Project (ARP), considered to be the most thorough analysis of the furry community’s characteristics, the furry community skews younger than comparable fandoms like anime but is fairly comparable” to similar groups of young, college-age students socioeconomically. 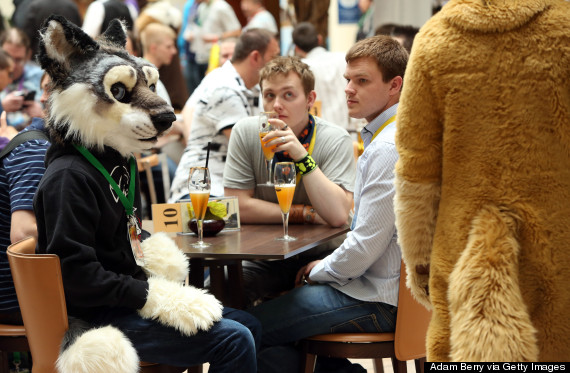 The ARP also reports that less than 15 percent of furry-identified individuals own their own fursuits, which typically run between $2,000 and $3,000 on the cheap end. So for most furries, their identification with the fandom takes other, more ordinary forms, like sharing and creating one’s own furry-themed art, writing and music.

Still, there are other ways the furry community is markedly different from the general population. Furries, both online and at conventions, are overwhelmingly male (78 percent-85 percent), overwhelmingly white (83 percent-90 percent) and generally “liberal-minded,” according to the project’s research, based largely on surveys conducted both online and at conventions.

As for the underrepresentation of females in the furry world, Dr. Courtney “Nuka” Plante, lead researcher of the ARP, said the discrepancy can trace its roots to demographics of the science fiction convention community that started in the 1970s. Plante said he believes the community is well on its way to seeing that change, however, as more females continue to get involved in online communities and at conventions.

Lucas “Roo” Raymond lives in Toronto and is the creator of the Fuzzy Notes furry music podcast, an organizer of the Camp Feral wilderness summer camp and is also working on another podcast titled “This Furry Life,” modeled after the popular Ira Glass-hosted NPR program, "This American Life." Raymond identifies as gay and has been with his partner, who is also a furry, for 17 years.

For Raymond, his introduction to furry fandom started very early, when he was a youngster watching cartoon programs. Growing up in the small town of Erin, he put up pictures of the cartoon characters he appreciated in his locker and “told people as a joke that I thought I was half-kangaroo because they were interesting."

"I had no other explanation,” he said.

It wasn’t until he attended university that he, like many other furry enthusiasts, stumbled onto the fandom via the Internet, which was still in its early days for most people in the mid-‘90s. Through the Internet, he found others like him who lived nearby, formed new friendships and finally had a name for that admittedly unusual interest.

“We all met each other because of furry, but we stay together because we’re friends,” Raymond told HuffPost.

Raymond says he was “definitely” out as gay before he identified as a furry, but said the community almost immediately felt like a “safe” space where he didn’t need to conceal his sexual orientation. At conventions, he says the crowd is a mix of “people of all orientations” and that such identities “don’t seem to really matter” there.

Despite the apparent growth of interest in furry events and communities, Plante said he doesn’t see the community ever “becoming mainstream.”

“People look at furries wearing fursuits or at conventions and they almost forget that there are people underneath those suits,” Plante told HuffPost. “People still have a long way to go before they can treat furry as what it is, just something to do for fun, like a model train enthusiast or a comic book fan. It’s good-natured and not anything scandalous or horrifying.”

Raymond, however, sees signs of progress for the furry community. The bottom line, he says, is that furries are just like everyone else.

“When you see a sports fan or a fan of a band at an arena during a game or concert, you’re probably not seeing them the way they look 24/7, at work or at home watching TV,” Raymond said. “Furries at conventions are no different from a sports fan wearing a cheesehead or a person all gothed up at a dark music show. The only difference is that one is culturally accepted, the other one, I guess, is shocking for some to see.”