What do background extras say to each other in the movies?: originally appeared on Quora: The best answer to any question. Ask a question, get a great answer. Learn from experts and access insider knowledge. You can follow Quora on Twitter, Facebook, and Google+.

Nothing. They are saying nothing.

I was an extra when I first moved out to L.A. years ago. I worked on Traffic, Moonlight Mile, Bedazzled, and others.

Most of the time they are pantomiming, which means that not a vocal word is coming from their mouth at all, rather, they are simply mouthing words while matching them with physical movement. And nine times out of ten, it's gibberish, random, and unplanned. Many times, they are mouthing typical conversational phrases like:

When the director starts a scene and they are shooting, the only people talking are the principle actors with dialogue, and any secondary that interacts with them. Extras are directed to pantomime so as to not interfere with the sound being recording of the principles on set.

There are exceptions. Robert Altman was famous for having multiple dialogue going on throughout a scene where the camera/mic would move to this part of the room and to that.

But a majority of the time, it's all pantomiming.

It even goes beyond dialogue. Ever see movie scenes set at a dance or anything equivalent? Nine times out of ten, those extras in the background are dancing to no music.

But it's not as easy to offer a believable extra performance than one would think. A former extra like myself can always spot terrible extra acting because the extras are always nodding their heads yes, raising their eyebrows and/or making big eyes while doing so, etc. This is an assistant director's nightmare (they usually direct the extras). It's a natural action for extras to nod their heads because they aren't talking and feel that they need to be communicating something somehow. So bad extra acting consists of constant nodding, big eyes, major exaggerated gestures, etc. I see it all of the time in movies and smile.

Sometimes extras whisper conversations to themselves or each other. Very quietly.

I had the nightmare scenario while I was working as an extra on The Beach Boys: An American Family (produced by John Stamos). I was in a 50s era car with some female extra. For 12 hours. Throughout the whole shoot, we spoke softly to each other. She was more talkative than I. Little did I know that her boyfriend was an extra too and was fuming at our extended conversation (I was engaged to my beautiful now wife, mind you). I don't think their relationship lasted after that shoot.

Long story short, 99% of the time, extras aren't saying anything. 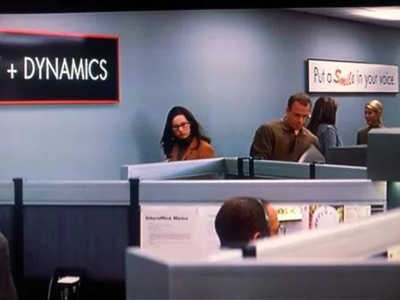 That's me in the brown shirt reading a file (back when I had hair). These pics are from Bedazzled (2000). The scene takes place in the opening of the movie after the credit sequence. 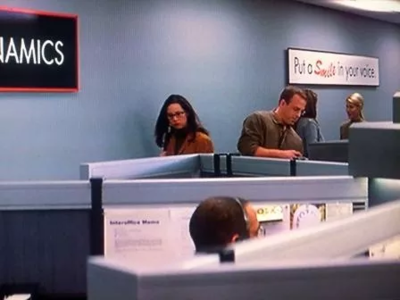 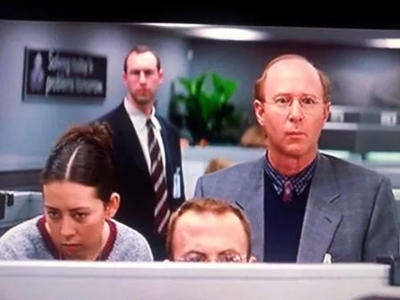 That's the top of my head. This instance was one case where we did talk softly. The guy behind me on the right (a character actor you may recognize) was playing with the phone saying how the nobs on the head phones looked like nipples. Not in the script, no.

This is from Traffic. That's me, the shirtless guy on the left in the background, walking.

Never said a word. Nor did the other extras around the pool.