Just last week President Obama made headlines by floating a $10 per barrel oil tax. This needs to be the opening salvo in a renewed effort to move the country beyond oil, but the effort also needs to be more ambitious. With the clock ticking on a two degree future climate activists need to consider innovative new efforts to drive vehicle electrification. That means taking a closer look at harnessing shared, electrified, autonomous vehicles that could reduce GHGs by up to 90%.

Even five years ago the most starry eyed unicorn chasing activists in the climate community wouldn't have dreamed that, of all of the electricity projections, Greenpeace would be the most accurate with wind, solar and other clean technologies dominating coal in the market for the new generation capacity. We have so fundamentally remade the power sector economic and political landscape that even the IEA projects clean energy will constitute two thirds of all new capacity additions between now and 2020. In short, while far from done, we're moving beyond coal.

But when it comes to oil, we have only just begun. The EV market is growing rapidly but still represents less than 1% of all new vehicle sales in the United States. While the political establishment is slowly warming to the economic benefits and growing political power of renewable power, oil still dominates the political landscape for transportation (despite half the shale oil drillers in the US facing bankruptcy thanks to plunging oil prices). You need look no further than California's landmark legislation SB 350 where oil companies dramatically outspent their opponents on their way to completely eliminating a goal to reduce oil consumption by 50%. Indeed, nobody today could imagine a future for oil that looks anything like coal today. 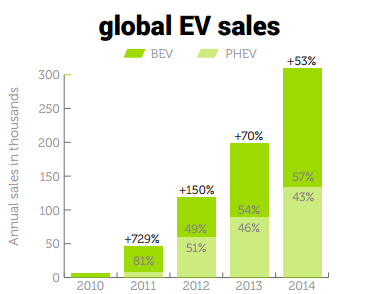 But in the midst of all of this turmoil a revolution is brewing that could dramatically upend our oil use driven by the confluence of three separate but powerful trends: 1) The advent of the sharing economy including Transportation Network Companies (TNCs); 2) Long range affordable Electric Vehicles; and 3) Autonomous Vehicles. 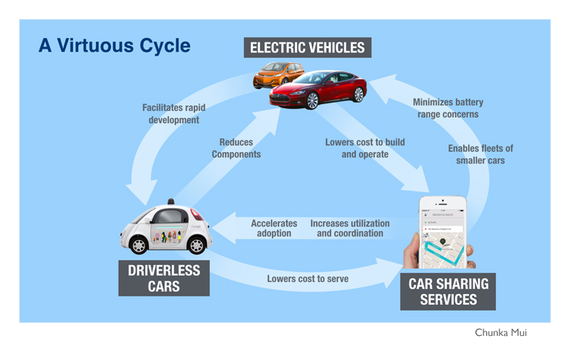 But how could this utopian future eliminate the need for oil? Because sharing and automation are like a turbocharger for transportation electrification that dramatically impacts the most critical variable -- time. Prevailing wisdom is that 15% of new car sales are an inflection point that heralds the "arrival" of a new technology. The problem is we are now at less than 1% and average fleet turnover is 15 years. So even if we convince everyone that EV's are indeed the future getting them to ditch their clunker is going to take time. That's why even an optimistic view puts mainstream EV deployment on a time frame of 2025-2030 or beyond.

But shared, autonomous vehicles can short-circuit the glacial speed of fleet turnover by greatly increasing their utilization. Current vehicles sit parked ~95% of the time, one of the most expensive and inefficient capital assets that people currently own. Put them to work in a shared fleet, and what normally takes 15 years could drop to as little as three to four years. The increased utilization also reduces the cost.

For example, Morgan Stanley estimates that autonomous vehicles could generate savings in the U.S. alone of $1.3 trillion per year from productivity gains, avoided accidents, and fuel savings. The indirect impact could be two to three times as much from, for example, reduced need for vehicles, parking, insurance and police. Shared, driverless cars allocated using smart technology could reduce per mile costs from ~$0.60/mile to as low as $0.15/mile due to greater efficiency, reduced fuel costs, increased capacity and utilization rates.

That means shared AV's could drive electrification where our current efforts have left us competing at the margin. That's incredibly important because today, despite growing interest, we still struggle to get dealers to stock and sell these cars. But in a shared autonomous future, vehicles that have lower operating and maintenance costs will have an inherent advantage, a sweet spot for EVs which will only get sweeter as battery prices fall.

Ironically, this could also contribute to a more equitable future as shared, electrified AV's, integrate with existing efforts to provide better transit, biking and walking, and expand consumer choice for affordable mobility in cities. It could also help improve the business model and efficiency of transit by offering lower-cost solutions for low-capacity routes and schedules. Imagine subsidized or free vouchers for shared autonomous Lyft or Uber rides for low income communities. It would turn the prevailing wisdom that these tech giants are for the 1% on its head.

Finally, EVs can further our efforts to clean the power sector by providing a flexible load which utilities can manage through smart charging. This will make greater use of fixed utility assets and enable better renewable integration, lowering the costs of clean energy for all rate-payers. The revenue from EV electricity sales can also help fund grid upgrades and future renewables. Even the traditionally staid Edison Electric Institute notes "Electrification of the transportation sector is a potential 'quadruple win' for electric utilities and society, and will enable companies to support environmental goals, build customer satisfaction, reduce operating costs and assure the future value of existing assets."

Which brings us to the important consideration -- its impact on the politics of climate. A shared, electrified, autonomous world would fundamentally redraw the battle lines and shakeup political alliances in a way we've not seen since the beginning of the age of oil. 21st century cash rich tech companies and utilities would suddenly line up on the right side of climate policy debates providing an important political counterweight to the oil industry.

But is there any chance this happens beyond the silicon valley bubble? For that we need some perspective. Remember even a few years ago, TNCs such as Uber and Lyft did not exist. Now, they operate in hundreds of cities, host over a million rides daily, and together are valued at over $50 billion. Over the life of the vehicles used in these fleets, the cost of the driver is the most expensive piece - $250,000 or more. Autonomous driving systems are expected to cost a fraction of that which makes figuring out autonomy job number one as they continue to grow.

At the same time, AV's are being pursued by a host of powerful companies with cash reserves greater than dozens of EU countries. That includes the likes of Apple, Google, Tesla, and Uber amongst others. Google for instance has been testing fully autonomous self-driving cars on the roads for years with over a million miles accumulated while Tesla's chief executive predicts that self-driving vehicles will be available to buy within three years. Even the federal government is getting into the game - in January 2016 President Obama proposed $4 billion over 10 years to fund pilot projects that help accelerate the development and adoption of safe vehicle automation. Meanwhile connected, electric, autonomous vehicles are a key part of the U.S. Department of Transportation's "Smart Cities Challenge" in partnership with Vulcan.

But none of this is assured. Technology is unlikely to be the barrier to a shared, autonomous, electrified future. It's far more likely that either the lack of good policy or worse, well-meaning but perverse policy will stall this revolution. A prime example is the recent proposal from the California DMV to require cars utilizing autonomous technology to include a driver at all times which eliminates the ability to easily share the vehicle. And barriers to the adoption of shared, electric, autonomous, vehicles affect the one variable that matters -- time. By deploying regulations that inhibit or slow the adoption of these technologies we are extending the age of oil and the dramatic levels of carbon emissions associated.

Policy is important not just to smooth the way for new mobility but to ensure its benefits are widely shared. A future that transitions from the 'horseless carriage' to the 'driverless car' will have profound impact on many sectors within our economy. Policy is required for a just transition that maximizes the benefits and ensures that the socio-economic disparity that already exists within our current transportation system is not exacerbated.

Similarly, just because these trends reinforce each other doesn't mean they will all advance together. Indeed, without affordable long-range electric vehicles we could see little to no reduction in oil consumption, especially if existing gas engines become the de facto standard for future autonomous Uber rides. So we stand at a crossroads between marginal EV growth, a dystopian future of fleets of gas propelled autonomous cars, and a shared, autonomous, electrified future. Only one is compatible with a safe climate and it's up to us to seize it.