I've been reading all the various polls and news reports. Everyone seems to agree that 'it's the economy stupid' to borrow a phrase, but I can't help but think that what we're not discussing is the future of the US Economy rather than just a band-aid on our past.
Shovel Ready vs. Soldering Iron Ready?

Back when we dug into the national piggy bank to rescue the car companies, I understood the rational. Beyond the tens of thousands of jobs at stake was the impact on all of the companies that served Detroit. Letting the automotive industry collapse would have been a disaster.
But more than three years later with the economy still struggling, maybe it's time to look to the future American economy rather than trying to resuscitate the past.

So I journeyed out to the New York Hall of Science in Queens, a site I remember from my childhood as a park of towering rocket ships and a massive great hall that celebrated space travel.

The one thing that is clear the moment you arrive at the Maker Faire is that the term 'geek' has gone mainstream. The sprawling campus of booths, tents, performances, and technology has its share of edgy Brooklyn-based performance artists. But the crowd was largely kids, families, and inventors. What Make Magazine calls "Makers."

Clearly none of these Makers want to be pouring cement, or building cars. Rather, they want to be using a soldering iron or a computer keyboard to invent new ways to live, play, and work.
Among the trends I'd take President Obama to explore - the remarkable phenomenon that is the Arduino, an open-source electronics prototyping platform based on flexible, easy-to-use hardware and software. Arduino is a prime example of open-source technology fueling innovation abd learning. How mainstream is the Arduino? Well, it goes on sale at Radio Shack this fall. (http://www.arduino.cc/)

Arduino is the kind of innovation eco-system that The White House could support today. Much like the President's Fitness Challenge drove health and set goals for the nation, it's easy to imagine an Arduino White House Challenge that would give young people the goals and rewards to drive big ideas into the economy. Today Dean Kamen's US First Robotics teams are doing that in high schools across the country. And yet President Obama stays almost entirely silent on technology as if somehow the future of America is about us embracing and revitalizing the past. 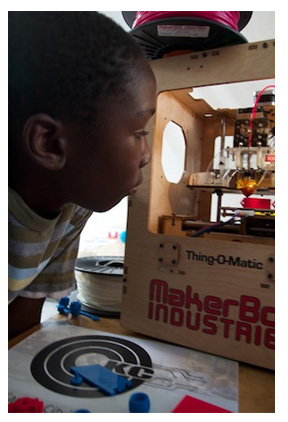 At the Maker Faire it's clear that's not where kid's heads are at.

Instead, they're fired up about 3d printers - turning the ideas in their imagination into real-world objects that can be produced as physical things. Robots. 3d Printers, computers that turn ideas into solutions. In the areas of transportation, energy, the environment, education - areas of critical need - the young minds at Maker Faire are fired up about the future. But their enthusiasm and passion seems to be operating in an alternate universe, as politicians fight over unemployment, new jobs, and ways to 'get America back to work.'
Maybe, just maybe, work won't ever be the same again.

In an interconnected, web-wired world, 'gigs' and inventions may replace jobs. If that's true, and watching what young people are doing it seems more than likely, then the politicians are measuring the wrong thing. They are trying to create old-world jobs and nostalgic snap-shots of industries on the decline. Meanwhile, MakerBot a 3d printer that was designed in NYC and has just gotten it's first round of venture funding, sells as a kit for just over one thousand dollars.

Dean Kamen, a prolific American Inventor who's mind is driven to solve problem's, describes US First this way: "Our goal is to transform our culture by creating a world where science and technology are celebrated and where young people dream of becoming science and technology leaders." http://www.usfirst.org

He'd be the kind of guy you'd want to invite to The White House to talk about how to ignite innovation. And he wouldn't be alone. Already Obama has around him some talent that understands the power of the web to drive innovation. Julius Genachowski is the Chairman of the FCC - an entrepreneur and business leader who's been championing technology investment. He and Barack go back to Harvard together, but it doesn't appear that he's been one of the advisers who have been getting a lot of traction with the President. And then there's the White House's Startup America Partnership, lead by Steve Case. Here too - a guy with a great network and a passion to drive technology in the economy. But here too an initiative that has gotten little airtime or support - even as roads and bridges seem to be the shiny new job fueling alternative. 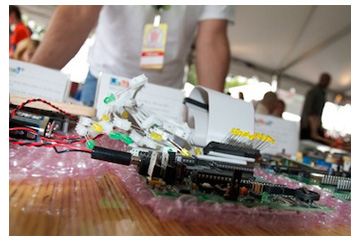 Back at Maker Faire - a generation learns to solder circuit boards, and print with 3d printers. The quest is, will there be jobs and an economy for them to work in when they graduate, or will they end up telecommuting to compete with low skill jobs as call-center employees or fast-food servers? Sounds like a tech economy would be a better option for all concerned.