You may think that she has nothing to teach you, that bear skills and human skills (especially human artist skills) are completely separate things. Sure... you both pick the occasional berry, but other than that you live in pretty separate worlds.

There's where you'd be wrong.

You see, we could learn a lot from the bears: masters of variable income. 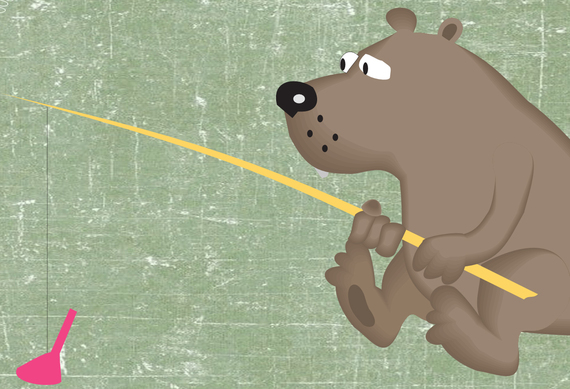 Okay... bear with me (#punforthewin)... they clearly don't make money, but if we just sub in the word 'resources' for income then we're on a more solid footing.

Just like us, bears don't have an equal parceling of resources every week; It's feast or famine. And they've gotten really great at handling this ebb and flow cycle.

So today let's look at these cuddly death machines, and steal a few lessons on how they manage the #variablelife.

Obviously it's less of an option for humans to just sleep for months out of the year... even though that would be a lovely way to spend most of the winter. But what we can learn here is that:

When there are fewer resources, you have to know how to conserve.

Hopefully your income doesn't go through a complete winter... but there will be times when there's not a lot coming in. You have to have the ability to operate on as little as possible.

There's a principle in business called 'the law of survivability' which basically states that the businesses that last are generally the ones that have the lowest operating costs.

There are times to spend a ton of resources on your life, and your business... but if you're living with variable income you also have to know how to cut back, and 'hibernate' so you can make it to your next big windfall.

LESSON 2: Go where the food is.

When a bear wakes up he doesn't crawl out of his den and complain that there isn't a nice tasty salmon just waiting for him.

He goes where the food is... which is usually crazy far away.

The whole point of being a freelancer is that you have the flexibility to go where the market demand is, and to not be tied down.

Don't be afraid to go where the food is, where you can get the resources that you need (whatever they might be).

When bears get down to those tasty salmon-filled rivers they don't mince words. They get down to eating.

When things are good, store up for the next hibernation cycle.

Your first priority as a variable income earner who's making some sweet cash, is to save up enough to get you through those lean times. Remember ... hungry artists don't think about art... they think about sandwiches.

You may be new at hashing out how to survive on an ebb and flow of resources... but don't freak out. Be like da bears, and you'll be around for yet another sweet season of salmon.

Want to be more bearlike? Click HERE for a ton more tips on managing variable income.