It has always been my dream to be a mother. As a little girl, I spent endless hours caring for my baby dolls and taking them on pretend adventures. As the years went on, I created my own vision of what real motherhood would look like someday. The handsome husband and the well-behaved children in perfect outfits. Me doing it all while looking fabulous. My children would be smart, kind, talented and loved by all.

I do have a beautiful family that includes a handsome husband and four wonderful children. There are moments when I look fabulous. My children are smart, kind and very talented. But they are also frequently misunderstood by the world. Their days are filled with moments that would have thrown the nuns who taught me into a tizzy. Their unusual behaviors would have had the popular girls in my class whispering in disapproval. My motherhood journey has been different than I expected. I am the mother of three boys with autism.

I remember the simultaneous rush of panic and excitement when I felt the first pangs of contractions. At the hospital I gazed out the window with wonder at the people in the streets below going about their business like this was any other day. To me there was nothing ordinary about it. I was about to become someone's mother.

That someone, my oldest son Liam, was born hours later. I was in awe of him. I felt such peace with him in my arms. I couldn't stop smiling or looking at him. The brush of his velvety skin against my cheek was pure heaven. When he was in someone else's arms I counted the seconds until they gave him back to me. I was blissfully happy.

Weeks later, the picture was not so perfect. Liam started to cry. A lot. He couldn't be held tight enough or long enough. He screamed when others held him. He barely slept. I was inundated with expert parenting advice from family, friends and strangers on how to "fix him." Nothing worked. When Liam learned to crawl, he became intensity on the move. When he learned to walk, he was running days later. I watched other children playing in the park while my child ran in circles and was literally drawn like a magnet to whatever he should not be near. The dirty looks and disapproval quickly followed. Clearly I was not doing something right.

I felt the stares of other mothers at the playground burning through my back as I struggled to help him through one of his frequent and explosive meltdowns. He acted like the children around him did not exist. Once, in a split second, he dumped sand all over a child as I helplessly tried to reach him and intercept. My profuse apologies were no match for the mother's understandable anger. I left quickly in shame with a kicking and screaming Liam. I sat in the car and cried while Liam repeatedly banged his head on the car seat.

I knew in my gut something was not right. But his doctor said he was just an active little boy. My in-laws said I was overprotective some days and not tough enough other days. Maybe I was just a horrible mother. I felt as though I was failing miserably at the only job I ever really wanted in life.

One time, when Liam was 2, we spent a beautiful summer day at a friend's cookout. All the children were playing together in the grass. All of them except Liam. He was fascinated with the tools in the garage and everything else he was not supposed to touch. During dinner, I tried to calm Liam during one of his frequent meltdowns. I overheard a so-called friend behind the grill mutter to his company, "If that was my kid, I'd shoot myself." I looked up and his eyes met mine. I put my plate down. I picked up Liam and announced to my husband that we were leaving. I heard no one else and saw no one else as we marched straight out of the party to our car in the street, with my husband chasing behind in confusion. I sat in the back seat on the way home trying to console Liam, who was distraught over our early exit. I showed him a magazine to distract him and he began to look through it on his own and quieted. I put my head back, closed my eyes, and tried to cool the rage inside me. The calm lasted all of about 30 seconds.

"Look Momma! Look Momma," Liam repeated over and over while jabbing me in the arm. "What, Liam!" I exploded. I opened my eyes to the page in front of him. It was a mother and her little boy walking on the beach holding hands. "It's just like you and me!" He beamed from ear to ear. Tears began to sting my eyes."That's right," I said, "just like you and me." I kissed his sweaty head and whispered into his hair. "No more, Liam. I am done listening to all of them. From now on I am listening to you, and I am listening to myself. I hear you. I see you." That was the day I truly became someone's mother.

The next day I called my pediatrician and demanded to see a specialist. Months later, Liam was diagnosed with Asperger's syndrome, an autism spectrum disorder. I have battled schools, insurance companies and others' opinions every day since then. It has been a tough road, but a true gift. Liam has taught me to enjoy every inch of life and to see beauty and humor where I hadn't looked before. I live and love more fully because of him. Real motherhood is not about having the child you pictured in your head or having a child who fulfills the dreams you thought you had. It is an adventure of discovery. Being a mother is about embracing the little person who is sent to you for who he or she is, and being open to the wonderful lessons you will teach each other.

Today Liam is 13 years old. The busy toddler who ran in circles on the playground runs instead alongside me in road races. The rambunctious preschooler who didn't notice anyone else in the sandbox is now a wonderful friend and volunteers at church. The little boy who always said the wrong thing now writes beautiful poetry. He is still quirky and marches to the beat of his own drum. I love that about him. He is braver than I am. 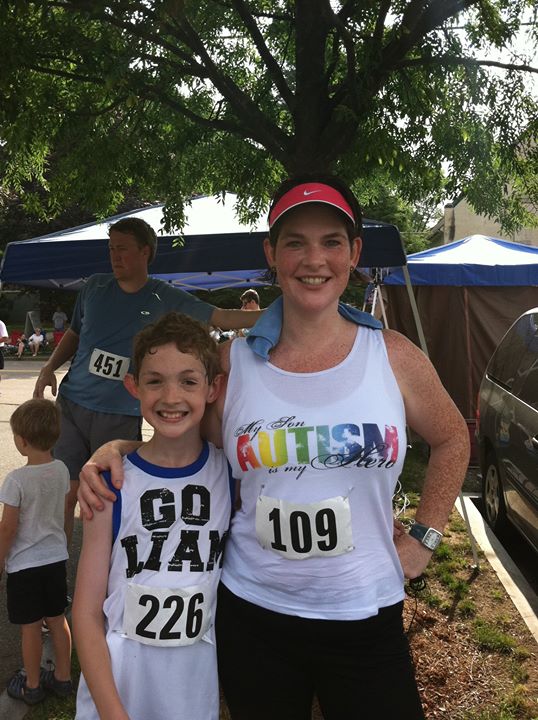 When Liam was 5, he and I were having a special afternoon together and stopped at a local carousel. We paid for our ticket, and he was off to find the perfect horse. "This one!" he announced in excitement as he clambered up the saddle and tightened himself into position. "Oookaayyyy, we are ready to go!" he pronounced with the full intensity of a space mission. I chuckled and climbed atop the horse next to him. The carousel began to spin slowly and then faster as we passed the same faces in the crowd watching us over and over. Liam started to lift his arms up in the air and alternated loud and enthusiastic cheers of "Woohoo!" and "Yee-hah!" and "Ride-em cowboy!" I saw the blurry faces start to whisper and stare. I began to tell him to quiet down, but then I stopped myself. I turned my gaze away from the faces circling around us and looked instead at the pure joy in the face of my son. I lifted up my arms, hesitantly at first, and then with more purpose. "Woohoo!" I cheered. Liam's face lit up. We circled around and around, hooting and hollering and waving our arms in the air as the world watched. This was our ride together. We only had one ticket. We should ride it our way.