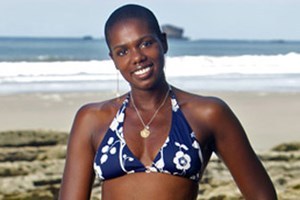 As far as losing on national television in front of millions of people goes, I have special expertise.

I was a contestant on the CBS reality television show Survivor, twice.

The first time, I appeared on Survivor: Redemption Island, where a fiasco of a tribal council earned me the distinction of being the first person voted out that season.

Because I had lots to say and didn't go down without a fight, I made more of an impression than your typical "first boot" (as we are called). As a result, I was the first "first boot," after 22 seasons of the show, to be invited back again for a second season.

Being a glutton for punishment and also overly competitive, I agreed to play again. Besides, in my mind it was a virtual guarantee that at the very least, I would top my previous season's showing. After all, the second time around I was on an "all-star" tribe, and some of my tribe mates were my actual, real-life friends!

If you've never seen the show, I totally won the second time! You can stop reading now!

If you have seen the show, you know what happened -- I got voted out first, again. (womp womp)

It's been a couple of years now since my second season, Survivor: Caramoan, aired. To this day I still have strangers come up to me in the street with complete and utter pity in their eyes as they say some version of "I felt sooooo bad for you!" I've gotten tons of sympathetic Facebook messages, tweets and the like.

I am "famous" (on a very E-list level) for being either the worst or the unluckiest contestant in Survivor history.

Sounds fun, doesn't it? Well, I will leave the Survivor-viewing public to decide my legacy as a contestant. On a personal level, my public humiliation was not in vain. This is what being a reality show loser taught me about winning at life:

1.You Must Define Success For Yourself

I'm not going give you the whole "winning isn't everything" cliché, because let's face it -- it totally is!

The question is, what are you trying to win, and why? I went on Survivor with the intention of winning -- the prize is a million dollars, after all -- but I quickly discovered that the prize wasn't the most important thing to me.

In Survivor, as in life, one popular strategy is to keep your head down, do what's expected of you, and don't piss anyone off. It's called "flying under the radar" and it's how a lot of us approach many circumstances in life. Which is NO way to win in life!

In my "real" life, this has never been my strategy. I've walked away from lucrative, secure jobs because they didn't speak to my heart. I've never stayed in a relationship with someone I wasn't crazy about (and who wasn't crazy about me) and I'm not one to keep my mouth shut when someone pisses me off.

For me, above all, success is being true to yourself. And that applies to your words, your actions, your career path, your relationships, everything.

In Survivor, the goal is to win one million dollars. I decided that wasn't enough money for me to be untrue to myself, and about that I have no regrets.

In our real lives, the goal might be to keep a job (even if we hate it), or stay in a relationship (even if it's unfulfilling), or just to go along with the crowd so that no one rejects us, or says anything bad about us.

You have to be able to live with yourself and your decisions, no one else. Success isn't just one thing. I know other contestants who made it much further in the game than I ever did, and yet they're still tormented by the experience, years later.

The point is, success for you is what you say it is. Yours is the only opinion that truly matters about your own life!

2.There Will Always Be Haters

We don't leave our haters behind in high school. You might not hear from them as loudly, but they're still out there! If you ever appear on a reality television show, however briefly, you will discover this firsthand.

After my first season of Survivor, I couldn't help but be curious about what viewers of the show had to say about me. A lot of it was positive, and I got a big outpouring of support from fans who felt that I hadn't been given a fair chance. (Thank you, supporters!)

I allowed my ego to be fed by those who felt they "loved" me. But not everyone loved me.

At one point after my second season someone created a Wikipedia page about me. (Thank you, stranger! So sweet of you!) I didn't even know it existed until I started hearing chatter about the campaign to have it deleted.

A group of strangers spent time and energy to lead a campaign to have my Wikipedia page deleted because they felt I didn't deserve it since I wasn't "famous enough!" (The irony of my being "famous enough" for them to even care in the first place was apparently lost on them.)

Well, in the end the haters won their campaign and my page was deleted. Congratulations, haters!

There are people out there in Internetland who have viciously criticized everything about me, from my looks to my gameplay to my wardrobe to comments I've made in interviews.

I've always been a pretty resilient person, but I have to admit some of that bruised my ego. No one enjoys reading strangers gleefully writing about how ugly, annoying or stupid they think you are!

But then I got the gift of one particularly vehement viewer's comments about me.

He (or she -- these comments are mostly anonymous) wrote that not only did they hate me, but they hated me so much they hoped I got cancer and died.

That comment was just outrageous enough for me to feel sorry for someone who held so much anger towards anyone, much less a complete stranger who'd never done a thing to them or anyone they cared about! It also cured me of caring what any stranger has to say about me.

No matter who you are or what you do, someone will be happy to criticize you. Haters hate because they desperately want to make you feel as small as they feel they are. What your mom told you in 5th grade still holds true - you just can't care what everyone thinks about you.

We've all been guilty of hating, myself included! But having my own public haters showed me just how much I never wanted to be that person. I just don't want to feel hate towards anyone. That feeling sucks.

I know that whenever I've found myself feeling envy or judgment towards another person, it has only ever been a reflection of how I feel about myself. The remedy? Focusing on having a lot more love and compassion for me!

3.Failure Is Inevitable; Dignity Is Optional

When those strangers tell me how sorry they feel for me, I usually thank them for their sympathy, but tell them not to. More than once I have landed in the position of comforting someone else about my loss. I assure them that I am okay and my life has gone on just beautifully.

I'm not trying to paint some perfect picture of myself here. There are people who I played Survivor with who are dear friends of mine for life -- even two who voted me out! And there are those at whom I will politely smile, say hello and keep it moving. Not everyone is meant to be in your life.

I wish I could say I had never publicly (or privately) said an unkind word about anyone I have played the game of Survivor with. That would be a lie. But I don't say those words anymore.

A bitter person is not the person I choose to be. I choose to move past my reality TV failure and to define who I am what I have accomplished on my own terms, with my head held high.

One of the unexpected outcomes of losing so badly is the self-reflection it caused. After my second time being voted out, I was faced with going home to the same uninspiring job I had returned to after the first time.

That realization was just depressing enough to inspire me to make some major changes in my life. And that's just what I did!

As it turns out, I have to thank those bastar-- I mean -- contestants for voting me out. Not only did I learn that I am tougher than I ever thought I was, but I started taking control of my life in a way I had never done before. After all, I have been in my underwear on national television -- in high definition no less -- so I really can handle anything.

Now I have a business and a life I love! I am unafraid of taking risks. Every so-called failure has a lesson, if you're willing to seek it out. As an entrepreneur, I have had my share of lessons! My advice? If you're going to lose, lose BIG! The important thing is to never lose sight of who you really are in the process.

Francesca is a recovering lawyer, matchmaker, life and dating coach. You can sign up for free inspirations on life and love at www.madetomeasurematching.com or follow her on Twitter @DearFranny.