Illinois working families already pay their fair share. Big banks, large corporations and the wealthy, however, continue to pay less and less to support the infrastructure that our state needs to thrive.

The result? The lives of hundreds of thousands of Illinois residents hang in the balance, as the deadline for the legislature and the governor to adopt a balanced state budget came and went. Elected officials still need to find $3-4 billion in new funds to pay for the vital and essential services and programs that support our economy, our communities and our families.

This so called budget crisis is really a revenue crisis.

In February, our rookie billionaire governor, Bruce Rauner, proposed a budget with $6.6 billion in cuts -- slashing vital services and programs that support Illinois families and children. He did this while bringing back tax breaks for wealthy corporations. That was his idea of shared sacrifice.

We are calling for a different kind of shared sacrifice -- one where the wealthiest individuals, corporations and big banks are asked to finally pay their fair share.

Illinois is one of only seven states that refuses to ask its wealthiest citizens to pay more in income taxes. Two thirds of Illinois corporations pay $0 dollars in state income tax. And every year, we lose over $913 million to banks who charge the state millions in fees and collect profits from predatory lending deals called debt swaps.

There are short term revenue solutions to fix this year's budget gap and long-term proposals that will structurally address the deficits that face us each year without fail.

There has been little to no talk in the halls of the Capitol about real shared sacrifice, about true progressive revenue solutions. Solutions that ask those who have more to pay more. Solutions that follow the money.

That's why recently, during the final official week of the legislative session, 25 grassroots community leaders and rank and file union members moved to Springfield to occupy our state Capitol. Named the "Revenue Truth Squad," these leaders brought the realities and voices of Illinois working families literally into the center of the Capitol. Determined to have the voices of working families heard in the debate about the future of our state, the Revenue Truth Squad carried out a week of creative direct actions and advocacy in and around the Capitol building.

They brought a "Raunerville" encampment into the Capitol and held it up outside the House chambers, to demonstrate the devastation of Rauner's proposed budget cuts. Truth Squad members held a die-in outside the Governor's office and the House Chambers. We held a mock press conference with our own billionaire Governor, where we unveiled the Millionaire Tax Ticker which calculates the amount of new revenue that would have been generated if we enacted the proposed millionaire tax ($2 million a day). And on the final day, after a last direct action inside the Capitol, we created a living art exhibition demanding that Speaker Madigan and Governor Rauner walk a mile in our shoes. 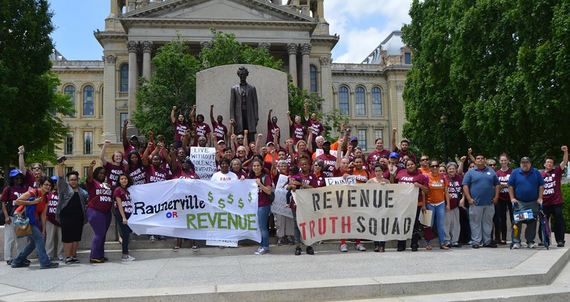 All throughout the week, the Truth Squad members visited with legislators from across Illinois, urging them to support real progressive revenue solutions.

There are three specific proposals that were championed by the Grassroots Collaborative's Revenue Truth Squad.

Tax Millionaires: About 64 percent of voters support a millionaires tax, getting far more votes than the Governor himself. Illinois is surrounded by states with much higher tax rates for their wealthiest residents. There are several paths to creating a fair tax in Illinois, with lower rates for lower incomes and higher rates for higher incomes. The estimated new revenue from such a change varies according to which path we choose -- between $1 billion and $6 billion.

Renegotiate Bad Bank Deals: Illinois taxpayers spend hundreds of millions of dollars each year on fees for financial services, which contributes to the state's financial distress. Last year alone, Illinois paid at least $413 million in fees to financial institutions (not all firms are required to disclose publicly). We call on state officials to show leadership by using the state's substantial buying power to negotiate fairer terms. For example, a 20 percent reduction in fees would result in at least $82 million. Any cut to state aid to municipalities should not be implemented unless those cuts are matched by equally proportionate reductions in fees for financial services paid by State Agencies.

And that work led to a very bright spot at the end of the week.

The House of Representatives voted unanimously to pass H.R. 531, introduced by Representative Chris Welch (D-7). H.R. 531 calls for the general assembly and the Governor's office to negotiate a reduction in the fees paid by the state to major financial institutions each year. Illinois pays at least $413 million in fees each year to banks and other private financial institutions. H.R 531 calls on the state to negotiate a reduction in fees, proportionate to any cuts that budget cuts passed on to human services or municipalities -- a shared sacrifice. And if financial institutions won't renegotiate, then they go to the back of the line in terms of which bills get paid first. So, if there is a revenue shortfall, as predicted, childcare providers and mental health clinics would be paid first, banks last.

As he continues to hold the state budget hostage, Governor Rauner has just announced his first set of cuts and closures to take effect on July 1. These cuts and closures have real impact on seniors receiving home care, working parents who depend on child care programs to stay employed and youth in the juvenile justice system -- to name a few.

These are impacts that will not be felt by the Governor. Or by the state legislators. They will be felt by working families, seniors, children and people with disabilities. And it is up to us to force the politicians to deal with the real crisis that they have created and that they are perpetuating. The revenue crisis.