There is something to be said for those small moments, moments where there are things we can fix, band-aids to be applied, kisses to be given, scotch tape, and glue, and staples...

And there is something to be said about the needle and thread I hold now in my right hand, as I clutch a little blue and gray sock monkey we found in the back of Owen's closet yesterday as I was doing some New Year's cleaning. He asked to bring it into his crib to join the menagerie of dolls and stuffed animals that have nearly overtaken the space where his little body goes to rest, and I said it was fine, only stopping him when I happened to glance over and saw some stuffing emerging from the little monkey's right leg. 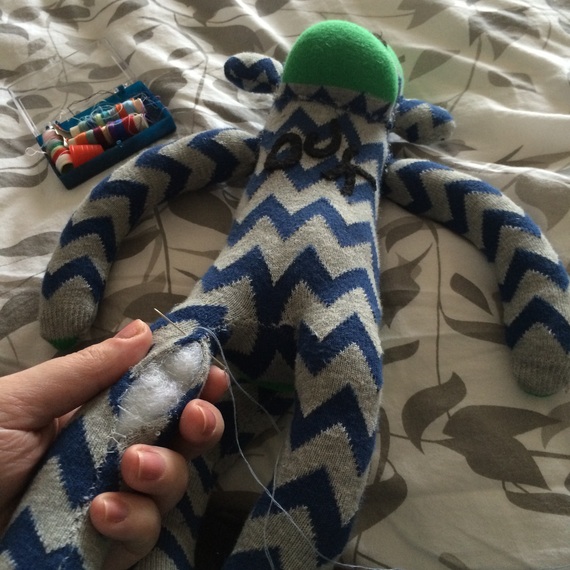 I assured my boy that I would fix the monkey's "boo boo" and return him right after Owen's nap.

And I sit here now, clutching this little monkey, and find myself suddenly confused as to why I am weeping as I lovingly sew his injured leg back up.

Something so simple -- a needle, some thread -- can fix so much. It's something so maternal, so natural, to want to mend, to care for, to fix as a parent. It is something that I can easily do for this silly monkey, and yet feel as though I am constantly failing my son in that same respect.

Where is the beautiful simplicity of the needle and thread to fix him? He is not broken in the sense that I would return him, or want another version that needed less repair -- but there are so many parts of him that need to be worked on, that need to be mended, that are misunderstood or baffle the broad community of specialists and therapists and doctors we have built up around him like a fortress.

And still, there he stands, as though in some sort of bubble that we cannot break, cannot pierce, in order to understand him, to save him from himself and others who don't understand him and -- who don't, or one day won't -- care enough to try before rejecting him.

How did this little monkey become a symbol for how simple it was supposed to be? How much my dreams for my boy have had to be continuously ripped open, then sewn back up with a thread that is clearly not strong enough to hold.

What if I am not strong enough?

How do I mend him? How do I help him? I think I am doing what I can -- maybe even all I can -- and it never feels like enough because something new always comes out.

His speech is improving, and his behavior is deteriorating.

He understands more, but I understand him less -- he screams at an eardrum-perforating pitch with clenched fists and tears springing to his eyes and cannot tell me why.

His sister is embarrassed by him.

Sometimes, I am embarrassed by him.

Oh God, that's so horrible to say, but it's true. Sometimes, it's just true.

And I'm not supposed to feel that way because I have a special needs child. It would be OK if he were typical, and screaming his head off in the lighting section of Target. It would be funny or relatable to complain or tweet or post a picture somewhere of my tantruming almost-4-year-old. I would have other moms shaking their heads because they can relate, they've been there. There would be reassuring comments on Facebook or Instagram, and funny little vignettes via text from friends regaling the times something similar had happened to them.

But not if he has special needs. There are different rules. We can't blow off steam in the same public way. We need to hide the sadness, the frustration, the disappointment -- or risk being perceived as rejecting our children, as ungrateful for them, or even hateful towards them. Even if it is exactly the opposite of all of these things.

I'm supposed to say he has the autism "superpower," or the "magical" brain malformation gene where he has the ability to make part of his brain disappear from the MRI images right before your eyes (only to have other parts magically appear all at once -- also called a stroke. Or would that be an "enchanted" stroke?).

Do I sound somewhat bitter and jaded about some of this? Well, I am.

I am not that mother -- I don't buy into this being a superpower, or magical gene. Nothing about this feels otherworldly. Unbelievable, maybe. Dream-like? Occasionally -- but not in a good way. There have been no unicorn spottings here, not a single sighting of a leprechaun -- we don't even have a box of Lucky Charms in the house (partially because food coloring "magically" turns both of our kids into maniacs). I dearly wish I could be -- that I had that cheerful outlook and optimism that I see and hear about and read about from so many other mothers in my situation.

Do I love my son? Absolutely.

Do I wish that he didn't have this myriad of diagnoses? Yep.

Do I wish I could magically fix him (for whatever that word means here)? Of course.

But I have not found that thread yet. I have not seen evidence that it exists alongside these "superpowers" and this magic that we have supposedly been "lucky" enough to inherit along with Owen's genetic soup.

So we will try, and we will fail, and we will succeed, and we will have triumphs and setbacks, and I will keep my sewing kit as fully stocked as I possibly can.

Because there is always mending to be done.

Because I am his mother.

And he is my thread.

This post originally appeared on Jamie's blog, Our Stroke of Luck.

More:
MotherhoodParenting ChildrenParentsAutism
Newsletter Sign Up
Raise the kind of person you'd like to know
Subscribe to our parenting newsletter.
Successfully Subscribed!
Realness delivered to your inbox