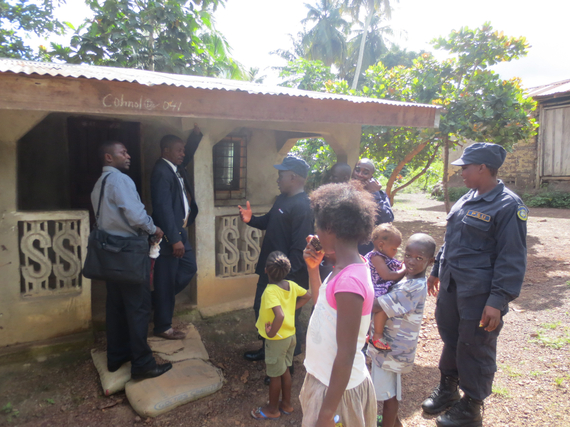 When it comes to community policing and de-escalating conflicts, the Liberian National Police have a lot they could share with U.S. police officers.

While not a new problem, over the past year or so, the media has been gripped by the scale and severity of police abuse of African Americans (and other minorities such as Native Americans and Latinos) in the United States. The stories of unwarranted police abuse and shootings all paint a similar picture. Police officers feel threatened in some situation involving an African American (or other minority) and then use excessive force in handling the situation. Prominent cases in the media include Michael Brown, Tamir Rice, Ezell Ford, Jesse Hernandez, Eric Garner, among many others. In 2014, according to Mapping Police Violence, a research collaborative collecting data on police killings nationwide, police officers killed 1149 people. None of these police officers were convicted of a crime. The Black Lives Matter movement has grown out of these encounters. Additionally, the CATO Institute reports that the costs associated with civil judgments and settlements related to police misconduct-related cases in 2010 were a whopping $346,512,800.

I have had the privilege of observing the Liberian National Police in handling and de-escalating local conflicts for the past three years, and in observing how they engage the community in outreach efforts. The following describes a typical community visit by police officers:

Liberian National Police (LNP) officers, including the special units such as the Police Support Unit (the riot police) and the Emergency Response Unit (SWAT team), enter communities and immediately ask to speak to the leaders in the communities. These are usually elected leaders in localities and villages who resolve day-to-day disputes and handle community affairs. The commander and the officers sit down with the leaders and ask for permission to talk to the community. After permission is granted, the community leaders call upon youth leaders and women's leaders to gather a crowd. The meeting starts with a prayer and then the officers introduce themselves and acknowledge the community leaders in the crowd, including all the elderly people. They then provide the message that they came to deliver. They ask for questions and for recommendations. Then, they close with a prayer, sometimes led by a religious leader of a different denomination or faith (such as an imam, if present).

Conflict de-escalation occurs in a similar fashion. When LNP authorities get word of a demonstration or some risk of mob violence, the top commanders in the LNP (even sometimes the police commissioner, or his deputies) set up a meeting with the potential rioters, and with the community leaders where the staged protest or violence is likely to occur. They then negotiate and mediate the conflict to prevent it from becoming violent. This has happened time and time again, and in this way, numerous riots, protests, and conflicts have been prevented. These unobservable conflicts go unreported, because the media only tends to report on the conflicts that do happen. Police abuse often occurs when conflicts escalate, and this is usually what gets reported.

Off course this is not to say that the LNP are perfect. They are far from it. A 2011 Human Rights Watch report of the LNP mentions police abuse and corruption as major problems. Nevertheless, the reports and the media do not pick up on the successes, and the successes are important, especially in a country with very low capacity to handle large-scale violence.

Obviously, it would be impossible to replicate this process in the U.S. due to cultural differences. But, some aspects of the process may be imitated. For example, police officers may do well to spend time getting to know local leaders in neighborhoods and communities. These may include church/mosque/temple leaders, leaders of homeowner societies, elders who have played prominent roles in the community, youth leaders, leaders in local and community-based NGOs, and others. The police could take the initiative to do outreach in communities and call on leaders to come to regular meetings. In terms of conflict prevention, police officers should also involve community leaders in talking down potential protestors and rioters. This collaborative effort to prevent violence is not possible without trust. If a real and meaningful relationships develop between the police and community leaders, then community leaders can serve as allies when there is threat of a conflict. It also means that police officers may be less likely to use excessive force because they know more people in the community in which they are responding. They are seen as less of a threat and more as a friend, and community members are seen by police as less of a threat and more as collaborators. Community members will also be less likely to attack police officers because the social costs for doing so will be higher. In sum, it is a win-win solution for everyone.

If community policing works in Liberia, then there is no reason why it should not work in the U.S.