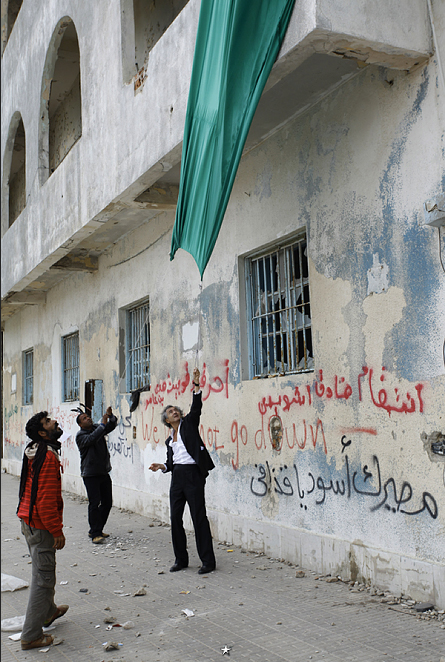 It is the question the world is asking itself about the one Arab revolution that has already been the object of the most savage repression -- and unfortunately, it's not over.

So I asked the question in Tobruk, the first free Libyan city on the road after crossing the border from Egypt. I asked Farid Rafa, 37, a former officer who fraternized with the people on the first day of the uprising and who "is holding out" with a few others beneath a tent at ex-Jamahiriya Square, since rebaptized in the name of a victim of the regime, Mahdi Elias. I asked Ali Fadil, an elderly professor of physics and chemistry who has hung young peoples' caricatures of Gaddafi -- Gaddafi with a grotesque mustache; Gaddafi made up as His Majesty, Lord of the Rats; Gaddafi as a woman, botoxed and heavily made up; Gaddafi in the nude, his hands hiding his genitals, fleeing from an insolent and joyous crowd; the head of Gaddafi, drowning in a sea of blood, etc. -- on the walls of his school, now closed down. Marvels of comic imagination and popular inventiveness, these drawings. The Revolution inspires talent.

Near Derna, I asked Ali Ramadan and Najib Ektet, two peasants who reconstituted for Gilles Herzog and me the battle they and 300 of their comrades had fought on February 27th to gain control of the airport at Alabrag. The guide had eight planes land there; loaded with troops, tanks, and pick-ups, they had been destined for the takeover of the city of Beida, a few kilometres away, in a show of force. The day we were there, you could still see hundreds of empty cartridges, evidence of the villagers' counter-attack, and woollen blankets thrown away into the thickets by the mercenaries from Kenya, Nigeria, Algeria, and Chad, whose officers, as usual, had told them nothing of their mission before the troop carriers had taken off again for Tripoli. And on the landing strip, piles of large stones, chevaux-de frise, an overturned fire truck, the radar from the control tower, armchairs -- everything they could find to neutralize the airport after their victory and prevent such an operation from ever happening again. 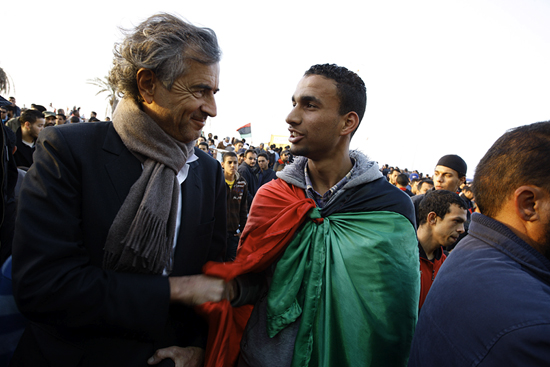 Benghazi. With a representative of the Youth Defense Committee of the City. 4 March 2011.

I asked members of the National Council of Transition at Benghazi, capital of free Libya, who granted me the honor of attending one of their meetings and of speaking there. In particular, I asked Hafiz Gogha, a lawyer and former president of the Libyan Bar, who embodies the rise in prestige and power of judges within this provisional administration. And I do say provisional, since these circumstantial administrators, these dozens of men and women who, between the 17th and the 25th of February, mutually co-opted to maintain the functioning of public services after the former regime's civil servants had fled, insist on the fact that, from their point of view and in the long run, there can be no other solution for Libya but a unitarian one of solidarity among the three vast provinces of Tripolitania, Cyranaica, and Fezzan.

I asked others as well, everywhere I went, as the occasion to meet people presented itself. And all of them agreed on a series of simple, clear requests of which the great democracies are capable and which, most of all, have nothing to do with military intervention on the ground, which is neither desired (they recall the regrettable precedent of the American war in Iraq) nor needed. Tripoli is a long ways away. Organizing a land offensive would imply logistics of which Gaddafi no longer has the means in the present state of advanced disorder of his regime and his army, according to our information. And the threat, in reality, comes from the air -- as is evident at every intersection of every city we cross, in the presence of these radar detectors equipped with obsolete batteries, their noses anxiously pointed towards the sky. 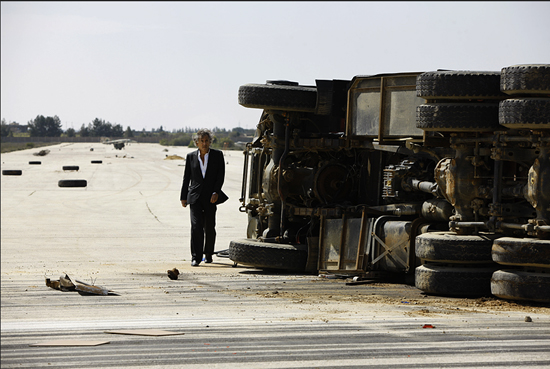 Labrak Airport, near Beida, neutralized by the anti-Gadhafists. Nearby, a fire truck that has been overturned. 3 March 2001.

1. All of them request the institution of a no-fly zone that would prevent Tripoli's Mirages and MIGs from coming to try to bomb the terminals at Braydah, a hundred kilometres from Benghazi, in hopes of provoking this viva la muerte of oil the author of the Green Book dreams of. It would also prevent Gaddafi's aircraft from committing a crime unprecedented in the history of contemporary counter-revolutions, that of making strafing runs against the crowds of civilians demonstrating peacefully in the streets of Tripoli or elsewhere.

2. If that is not possible, they request surgical air strikes on the main military airfield planes take off from at the airport of Sirte, 500 kms to the east of the capital, and other strikes on another military airport located at Sebah, in the south of the country, near the Chadian border. The latter serves as a beach head for the shuttling of mercenaries, such as those of Alabrag, whom Gaddafi recruits for a small fortune, having never trusted his army and, more than ever, having no choice but to pay the dogs of war. And last, they request strikes on the infamous Bab El-Azizia at Tripoli, the guide's command center and bunker as well as, no doubt, a house of torture like the one the people of Benghazi besieged and set fire to -- their own storming of the Bastille! 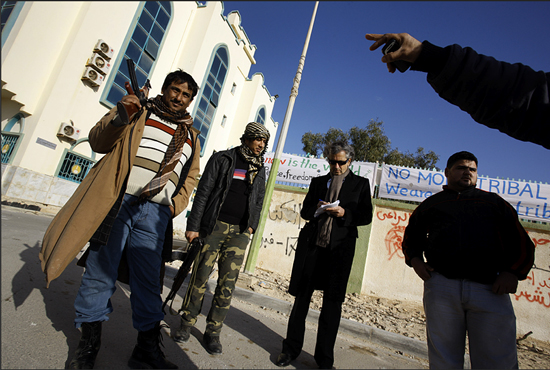 Bernard-Henri Lévy at Tobruk. Mahdi Elias Square with the defenders of the city. 2 March 2011.

3. Failing that, again, they request the destruction or in any case the long-distance jamming of transmission systems that alone, as in all modern warfare, make it possible for the Libyan military to operate, even if it's falling to pieces. "What?" Abdeljalil Mohamed Mayuf, director of the Arab Gulf Oil Company, said to me, at the hotel where we were dining, watching the members of the international press corps try to make their PCs, portables, and other Turayas work. "Do you mean to tell me that Mohamed Gaddafi, the dictator's eldest son, is capable, through the pathetic 'General Communications Authority' he heads, of paralyzing your computers and preventing me from phoning my family members in Tripoli? And that the American fleet, stationed in the Gulf of Sirte, would not have the means to put the father's instruments out of commission and ground the planes? What a joke!"

4. All of them ask as well for a concerted action on the part of the African regimes (but also, the Serbian and Ukranian ones) who tolerate the shameful traffic that allows these regiments of mercenaries that make up, I repeat, the mass of the official army, the dregs of which I have seen at the Egyptian border attempting to melt into the throngs of Bangladeshi refugees fleeing the chaos, to be dumped on Libyan soil. This demand is addressed in particular to France. It is addressed to Great Britain, for its presumed influence in Kenya. But it is addressed even more to France, the country that carries considerable weight in other African countries that supply these professionals of death and that remains, moreover, the homeland of human rights for all the Libyans I met. "I don't very well understand," Abdulatif Gebril, professor of French in a country where the teaching of language, in particular French, has long been outlawed, his voice trembling with emotion, "how an advisor of your president" (Henri Guaino) "accompanied by an ambassador of France" (whom I cannot, on the other hand, identify) could still "pass last Christmas" in Tripoli. "But it's never too late to make up for it! Use your French-speaking world to convince your friends in Lomé and N'Djamena that they are the accomplices of a new slave trade -- and you will be absolved." 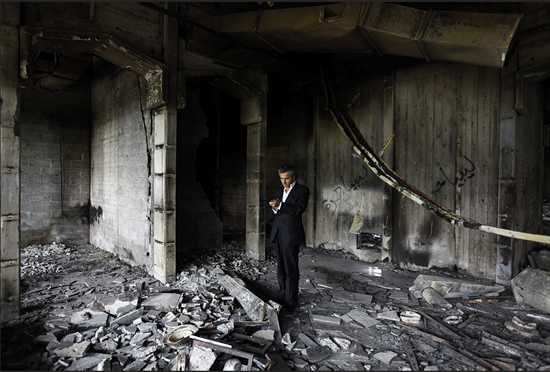 Bernard-Henri Lévy in the ruins of Gadhafi's residence in Benghazi. 4 March 2011.

5. Thursday night, we saw a French humanitarian convoy arriving in Benghazi from Egypt. "It's good," another representative of the Provisional Transition Government told me, "and we are grateful to you for this gesture of friendship." But he immediately added, with a smile whose wry irony could not hide his very deep distress, "It's good, but you can see that here, up to the front lines at Braydah or Ras Lanuf, we lack for nothing. The stores are well supplied, whereas there are other free cities, those to the west, Misrata and al-Zawiyah, that are completely surrounded and that, as I speak, are lacking everything. Isn't that where the boats should deliver aid?" This is their fifth request. Perhaps it is the most difficult to satisfy. No doubt it would also force us to ruffle up the clear conscience earned by blind and haphazard humanitarian actions.

And no matter what the humanitarian action, it will not, at any rate, prevail over the law of massacres. (Last night, again, here in Benghazi, the mere trifle of thirty dead is the result of the explosion of a munitions depot.) But I could not fail to mention it.

6. All the more so because the Libyan revolutionaries are waiting for a powerful gesture that, in itself, wouldn't cost much, consisting of proclaiming that the legitimate representative of their country on the international scene is no longer Muammar Gaddafi but the National Council of Transition. "See this palace?" Abeir Drakhim, a student who was the friend of Almahdi Ziou, the young martyr who, on the evening of the 17th, propelled himself, in his car filled with explosives, against the gates of the Benghazi barracks, opening the way for the people to besiege it, said to me. "Look at its obscenity," he insisted, leading us through the charred remains of the dictator's residence, where a facetious and rebellious soul had tagged the words of Bob Marley, "Stand up, get up, he will give up". "When he came to France and Italy, [this man] told you he could only live in his Bedoin's tent and he could only drink camel's milk. But here, in Libya, he lived in homes like those of his friends Ben Ali and Mubarak. Do you think he is worthy, this man, of this country's pride?" In substance, he is pleading that there is a gesture, yes, one you could make right away and that, for Libyans, would change everything: to say, just to say, that all recognition as the country's representative has now been transferred, after 2,000 dead, from this lunatic to the provisional government. 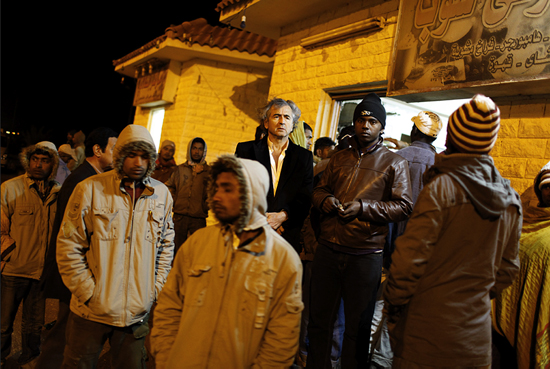 Saloum. Gadhafi's mercenaries fleeing, blending in with the refugees. 1 March 2011.

All of the people I talked to repeated that the Libyan revolution belongs to the Libyans. But at the same time, all of them know that Gaddafi is much more stubborn, fearsome, and suicidal than Mubarak and Ben Ali.

All of them know that here, there is no true army that constitutes the backbone of the regime and is capable, as in Egypt and Tunisia, of pushing him towards the exit.

And all of them, then, agree upon these simple but vital requests. Without them, without these forceful interventions the immense crowds that fill, in turn, the corniche of Benghazi would no doubt applaud, the Libyan revolution will live under the threat of a madman who has nothing left to lose and who, sooner or later, will do all he can to ensure that Libya will be sucked into the abyss with him. Photos by Marc Roussel.