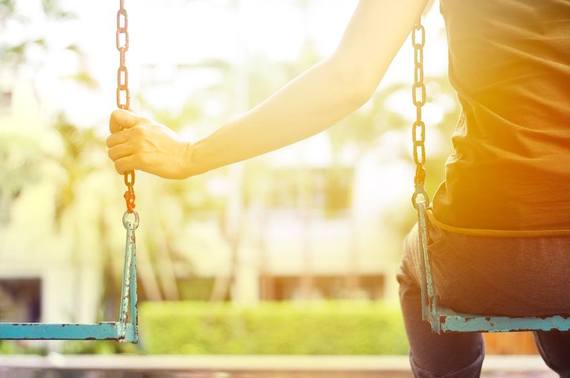 September is Childhood Cancer Awareness Month. This is my second post about it. Why two posts? Because nearly 16,000 kids in the U.S. are newly diagnosed with cancer each year--43 every single day. According to the National Cancer Institute, nearly 2000 children and adolescents up to age 19 die of cancer each year.

Maybe the numbers don't sound that high and that's why only 4% of U.S. federal funding is dedicated to childhood cancer research. Trust me, 4% is not enough.

For my daughter, 4% means they don't know how to stop her cancer from growing. Even after four years of treatment with surgery, standard chemotherapy, targeted chemotherapy and radiation, the cancer continues to progress. Since the age of 11, my daughter has had to undergo treatments designed for adults. Four percent means cancer gets to keep taking things away from my daughter and my family.

By now, most families with school-aged children have settled into the ritual of scheduled days and homework-filled nights. Those packed lunch boxes, crisp new backpacks, and twice weekly after school clubs are a psychological safety net. They keep you grounded, give you and your kids a sense of purpose.

You might not think you'd miss the predictability of your life if it went away, but I'm betting you would. That safety net of routine is one of the first things that cancer takes away.

Imagine that on top of work, school, extracurricular activities, self-care necessities (flu shots, dentist appointments, haircuts...) you also spent 2 to 5 hours a week on the phone with the insurance company, trying to get your child's key lifesaving medication preauthorized (again)?

Imagine fitting in weekly visits with hospice, weekly or bi-monthly visits to the lab for blood draws and day-long appointments for scans and blood transfusions?

Imagine that your carefully planned weekend, which includes some down time and a few hours tucked away to do something you love (read, knit, ride your bike...) got side tracked because your child had intractable chest pain and spiked a 103-degree fever? You'd have to figure out what to do--spend hours on the phone tracking down physicians, getting prescriptions and assess whether it's a true emergency or a weird quirk of cancer (the temperature spike was from too many blankets and a heating pad).

Imagine, after a weekend of frantic worry, your child is now stable and even well enough to go to school on Monday.

Now, you're sitting in front of the computer, trying to wrap your head around the idea that this could be a normal day of work, a productive day, a day you pretend is just like everyone else's day...and then someone from a respiratory therapy company calls.

That productive moment is lost because after you get off the phone, all you can think about is the supplementary oxygen they're about to deliver, and the fact that your daughter can't light candles anymore (something she loves) because it's too dangerous.

I think most people are very aware of the obvious things we lose to cancer (health, life, independence), but childhood cancer takes away so much more from children and families (like candles...and weekends.)

I used to have a tangible sense of a time "before cancer" vs. "after cancer." Immediately after her diagnosis, I was in a constant state of deep grief, trying to accept that that my once healthy, normal child was now desperately ill. I'd walk around the house during her long hospital stays and see reminders of our old life everywhere--a pile of untouched art supplies, a photograph of her and her sister playing at their favorite park, hairbands that she no longer needed.

These days I don't have to remind my daughter to text me when she takes her medication. She knows enough about her body to alert me when she thinks something is really wrong. She recognizes what tumor pain feels like. She coaxes her younger sister out of her bedroom because she knows how important it is for them to spend time together.

She is a gift--this strong young woman who has emerged from a hellish four years of uncertainty, pain and heartache. But that same sense of sorrow I had when looking at the reminders of my healthy child now overwhelms me with each passing day. Because 4% was not enough to stop what's coming.

I'm acutely aware of each moment. While that may sound amazing--to be fully present--it's not actually as Zen as it seems. I'm living these moments with a sense of desperation, feeling each one fully, mourning them as they pass by. I'm hyper sensitive to every transient second--grains of sand slipping through my fingers.

Cancer has taken away my mojo. It's mired me in the moment in the worst possible way. I'm frozen, a deer in the headlights, watching helplessly as my worst fear gets closer and closer.

And it's not just my family, not just my child, out here in cancerland, hoping for a cure. A thousand versions of this nightmare are being played out in a thousand other homes, ten thousand, a hundred thousand.

We think about the big things cancer takes away all the time--holidays, birthdays, the first day of school--but there are a million small things it takes away too. Family dinners--ruined because of nausea, relaxing baths--not possible due to infection risk, favorite foods--off limits due to medication interactions, and so much more.

We all need be aware, not just those of us in the trenches. Together we can move the needle--hopefully--and someday this diagnoses won't be so devastating.

More:
cancer Parenting ParentsFamilypediatric cancer
Newsletter Sign Up
Raise the kind of person you'd like to know
Subscribe to our parenting newsletter.
Successfully Subscribed!
Realness delivered to your inbox