A report released on Thursday argues that throwing hundreds of thousands of people in prison has had only a small impact on the crime rate.

Violent crime has fallen by 51 percent since 1991 and property crime has dropped by 43 percent during that same time, according to "What Caused the Crime Decline," a report released by the Brennan Center at New York University. During that time, the number of people incarcerated has jumped by 61 percent, with almost all of that increase coming between 1990 and 1999.

But while those numbers might suggest that there's a strong causal relationship between mass incarceration and lower crime rates, the study says that's not actually the case: throwing more people in prison is only responsible for a small fraction of that steep decline.

"Public and political pressure to eﬀectively ﬁght crime and improve public safety has been used to justify mass incarceration despite the economic, human, and moral toll," the report said. "However, as this report ﬁnds, during the past two decades the approach of using incarceration as a one-size ﬁts all punishment for crime has passed the point of diminishing returns to actually reduce crime."

In the 1990s, increasing incarceration was responsible for approximately 6 percent of the property crime decline and less than 1 percent of the drop in violent crime. Since 2000, the effect of locking up more people "has been essentially zero," the report said.

There are 2.3 million people in prison or jail today, and 40 percent of them are African-American. At current rates, one in three black males can expect to spend time behind bars, the report found. It costs the country $80 billion a year to keep people behind bars.

Bur if locking people away doesn't reduce crime, what does? 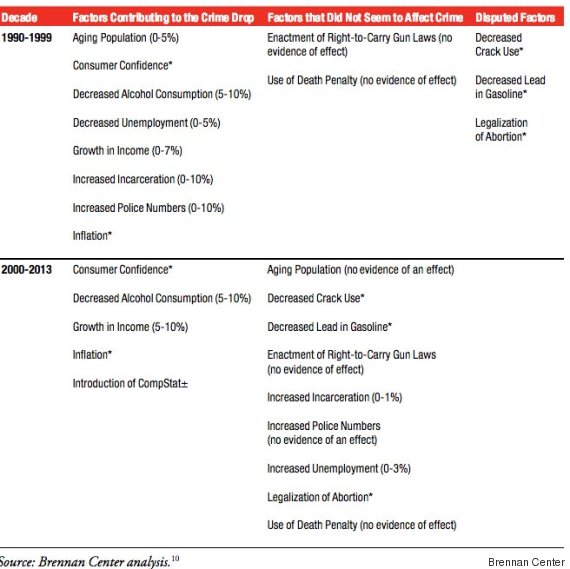 The Brennan Center researchers found that, combined, social and economic factors played a bigger role in the crime drop than mass incarceration.

Reducing per-capita alcohol consumption, for example, lead to a 5 to 10 percent crime reduction between 1990 and 2013.

Decreased unemployment and increased income were responsible for as much as 5 and 7 percent of the crime decline, respectively, the report found.

There was also evidence that increasing the number of police officers was responsible for as much as 10 percent of the crime decline between 1990 and 2000, but since then, it has had a negligible effect.

"In times of shrinking budgets or economic prosperity, the government should be in the business of investing in and deploying policies that achieve their intended goals," the report said. "This report oﬀers lasting support that there is a continued need to rethink policies that are bad investments: costly, harmful to society, and now proven to have diminishing eﬀectiveness to control crime."