Every now and then an artist so vividly articulates a quiet fear that it takes my breath away. Fresh from the celebration of Earth Day, a year long celebration, I wanted to share with you "Deep North" by artist Chris Larson. 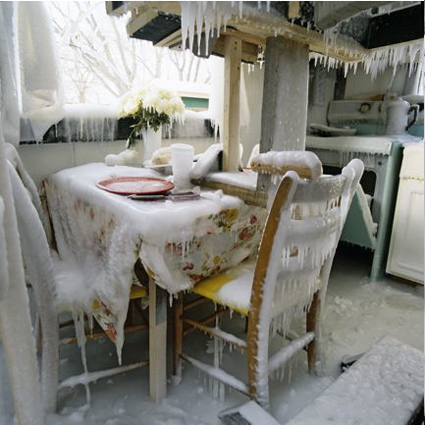 As an artist, I do not profess any deep knowledge about the science of climate change, but I do have specific images that come to mind when I think about it. There is a moment in "The Inconvenient Truth", for example, when Al Gore explains how the Gulf Stream-- the conveyor belt of ocean currents that guides warm water around what would otherwise be a much colder climate, might break and could theoretically plunge Europe into a rather a rather sudden ice age. 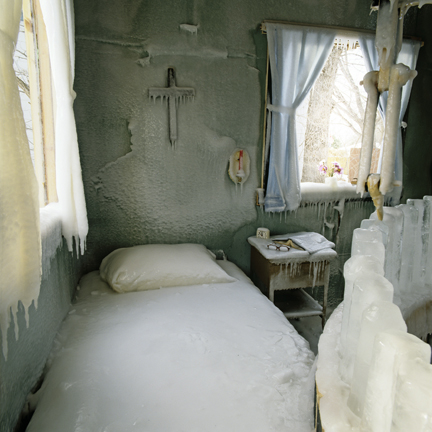 I too was flummoxed by the idea that "Global Warming" could really cause extreme cold. Isn't the concept of rising sea levels from melting ice sheets and glaciers, destroying island nations and flooding millions of coastal residents by the end of the century enough and quite the opposite? But sudden severe changes in temperature in both directions is the potential result of the monster we've created through years of carbon emissions and environmental neglect. 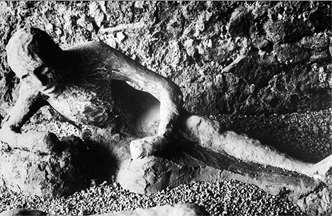 Victim of Pompeii, A Time-Lapse Metaphor for Man's reaction to Global Warming

Whatever the effect, I anticipate being wholly caught off guard by the kind of earth that awaits us in the future, like a victim of Pompeii. Through his stills and films, Larson taps into the fears of man's impact on the earth while also creating a strange and haunting beauty found in this isolation. 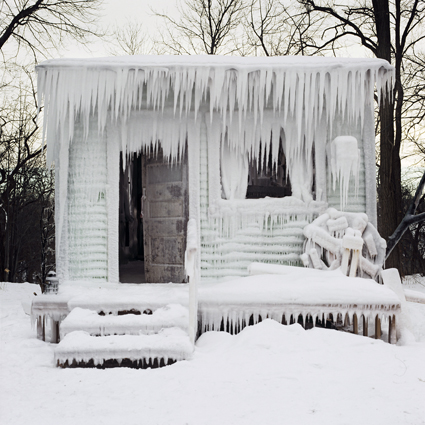 I asked Chris what inspired this vision and he told me that while vacationing in Versiox Switzerland, an intense ice storm moved in the night before covering everything. He said it was "gorgeous and apocalyptic." This inspired him to recreate the moment in his hometown of St. Paul, Minnesota. In the fall of 2008, he built a house, and then in February, the coldest month of the year in Minnesota, he sprayed hundreds of gallons of water on the house to recreate what he witnessed in Versiox. He then shot a short film inside of the house called "Deep North". 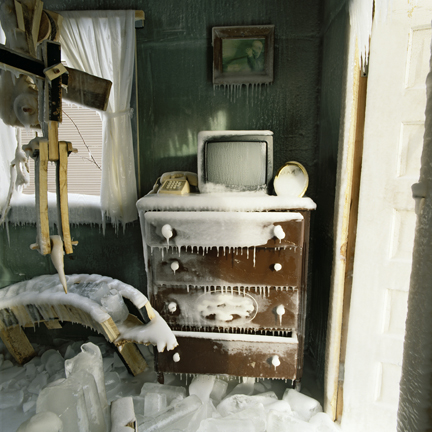 Larson's prints in Deep North capture human naiveté and the wrath of mother nature all at once. It provides a space as quiet as a pin drop-- the kind of quiet that only happens in winter-- where we can hear ourselves think. And unlike the other messy apocolyptic visions of say, a nuclear winter or a war torn city, the destruction evokes a much larger force than man at work. 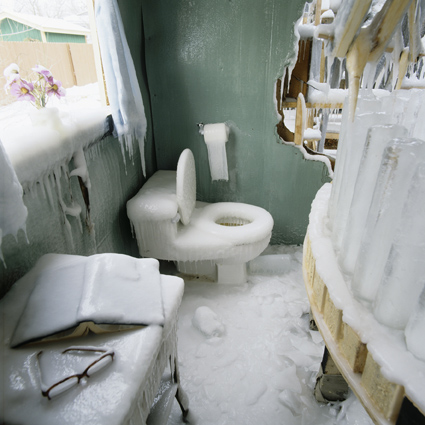 About the Artist Chris Larson was born in 1966 in St. Paul, Minnesota, where he still lives and works as an artist and Assistant Professor at the University of Minnesota. In 1990, he received a Bachelor of Fine Arts at the Bethel College, St. Paul, MN, and in 1992, a Master of Fine Arts at the Yale University School of Art, New Haven, CT. His latest work "Deep North" was presented at the magnus muller Gallery in Berlin and at the Rochester Art Center in the winter 2008/09. His next solo show will be at the Burnet Art Gallery at Chambers at the Luxury Art Hotel in Minneapolis, MN. Chris Larson is represented by magnus muller, Berlin (www.magnusmuller.com).

First Person Artist is a weekly column by artist Kimberly Brooks in which she provides commentary on the creative process, technology and showcases artists' work from around the world. She has also had it up to here with plastic. Come back every Monday for more Kimberly Brooks.