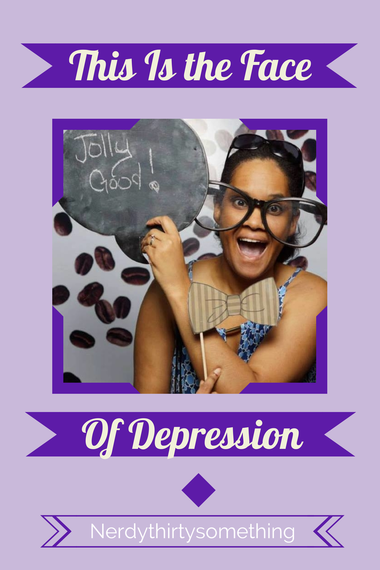 I was curled up in bed in my darkened room, watching television. I should have been in class that day but didn't feel like going.

That day was April 20, 1999, when 13 students and teachers were killed at Columbine High School. That tragedy only fueled the sadness inside me. I was overwhelmed. Anxious. I couldn't sit still. If I tried to relax, something inside would jump or twitch. It was awful.

Who knew one person couldn't handle two part-time jobs, church activities and a full-time class load? It broke me.

The process of getting "better" was just as difficult as the illness. The shrink told me I had OCD, anxiety and depression, and they each required different medications. (I recognize now that the OCD was a misdiagnosis. I don't have any compulsive behaviors. I actually have generalized anxiety disorder, but the medication for OCD has been beneficial with irrational fears I have.)

Multiple medications, several of which I still take today. Visits to the university's disability services office to drop some classes and make arrangements for others.

I was positive that everyone in my economics class was staring at me, judging me. So I was offered the exam in the career center, alone. Despite knowing this accommodation was available to me, the night before, as I was studying, I fell to the floor weeping uncontrollably.

I thought I'd fail. I figured all of this studying was worthless. I was only wearing a T-shirt and underwear, but I didn't care when my dad came into my room and tried to comfort me. That moment is still so vivid, thinking about it even now almost 15 years later, it brings me to tears.

I even felt awful for using disability services. I was falling prey to my own stigma.

"People with physical disabilities are the ones who need the most help. I don't deserve or want special treatment."

Of course, I got an A in economics, confirming my fears were completely irrational.

Then there was the night I was standing near my dresser, pills in hand and quickly had the thought, "I wonder what would happen if I took all of these pills?"

Knowing this was a bad sign, I told my psychiatrist and they immediately put me into a three-week hospital day program for having "suicidal thoughts." They had enough trust in me to know I'd make the drive into town myself, every weekday.

Some days it was boring. Who wants to sit in tiny rooms from 9 a.m. until Lord knows when in the evening? But it would be my first introduction to cognitive behavioral therapy and Lorna Doone shortbread cookies.

The aftermath of Columbine was weighing on all of us as a nation still, but I had to recover. I could tell I was getting better. I wasn't as disillusioned with school or with doing... well, anything. I'd have relapses, like that next summer when I studied and worked abroad in Australia, and I became painfully homesick.

Then, as with all of us, life went on. My first experience after college living away from home was a bit of a bust. Losing a classmate from my study abroad program on 9/11 didn't help. To this day, I still avoid footage of the attack.

After my mom's cancer diagnosis, I became a serious homebody. Most of my friends accepted this. Some didn't. But I lived. I lived as much as I could.

My illness is manageable, and I'm considered "high functioning." My symptoms are internal, so it's nearly impossible to tell unless you spend a lot of time with me. (Poor hubby.)

Some days I can't tell if I'm depressed, fatigued or just being lazy as they all "feel" the same. Being an entrepreneur is not exactly the easiest profession when you suffer from anxiety or depression. I require structure and most days I struggle to create schedules for myself. But I'm growing my business at a pace that's comfortable to me.

I've felt overwhelmed lately, so I incorporate more breaks, maybe a nap. Of course, the guilt creeps up, but I try to push it away. I still see shrinks and take meds. It's a part of my life now, and each therapist over the years has told me it will probably always be this way.

Also being an introvert, being around other people is exhausting. I love to laugh, but I have to practice being social and be intentionally positive. It's not easy, but I do it. This is why I'm purposely doing more networking events, speaking engagements and sharing my story publicly -- to get over that fear and to dispel some of the melancholy I generally feel.

This is the life of someone who is depressed and anxious. Only a few people knew the whole back story until now. Robin Williams' death spurred me to do something... anything.

I hope this encourages someone to continue living as well as they can, because each day, every day, there is something to live for.