Who comprises Pixar's production staff?: originally appeared on Quora: The best answer to any question. Ask a question, get a great answer. Learn from experts and access insider knowledge. You can follow Quora on Twitter, Facebook, and Google+. 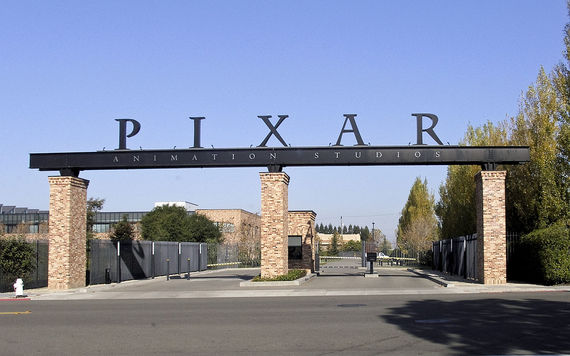 This question demands a lot of detail. I'm not sure I can provide all of it. I'll do my best to sketch it in here. I'll doubtless miss something. I'll probably also get stuff wrong. There are a lot of moving parts to a Pixar movie production. There are people whose jobs involve keeping track of those parts. I never worked one of those jobs.

Keep in mind that every single thing you see on the screen has to be designed, built, placed, animated (where appropriate), shaded, and lit. Nothing comes for free in CG animation.

Director - Originates the story and creatively guides the production.

Producer - Makes the big machine run and execute the director's vision, and also keeps the director's requests in check. Has to worry a lot about money, schedules, and staffing (which are the same thing).

Production Office Staff - They are the producer's ears, eyes, hands, feet, and prehensile tail. They make sure all the parts of the machine have what they need when they need it, from pencils to screening rooms.

Production Designer - Responsible for designing the look of the film.

Art Department - Responsible for the myriad bits of art required, from character and model designs to painted textures.

Story Artists - Along with the Head of Story they develop the story beats of the film visually, drawing tens of thousands of story boards, none of which will be seen in the final film. There's no way one director can come up with all the story details, and this department fills in all of them. It's a big job.

Character Modeling/Articulation - Modelers build the geometry of the sets, props, and characters. Articulation gives models the ability to move and change shape.

Editorial - This department spends the entire production, sometimes five or six years, in crunch mode. Animated films at Pixar are edited constantly, starting with the story reels (which are storyboards with scratch vocals) and right up to the final release. Often overlooked on the outside, editorial is where movies are made. Everybody else gets them the raw materials.

Layout Artists - Once story reels and models for a sequence are approved, they do the first build of the movie in the production system. In fact, this is where preproduction ends and production starts. They place the sets, props, characters, and camera in each shot of the film. They work fast to rough things in because that first step into 3D is a doozy. Problems are always found, revisions made, and Layout Artists have to throw out much (sometimes most) of the work they do. (I built well north of 500 shots for Toy Story that were never used.) They sketch it in and try to get it right before the shots move on, because while a Layout Artist might produce a dozen shots or more in a week, an animator will spend days or weeks on a single shot. This is the basic filmmaking department, and forms one half of the virtual "cinematography brain".

Animators - These are the actors in Pixar films. They take the layout and the (hopefully) final dialogue and animate each shot. The definition of animation used at Pixar is "to bring something to life." If the audience is convinced that a character's actions are the result of a thought process then they will see that character as alive. Animators must also respect what John Lasseter calls "truth to materials," meaning the physics of motion need to match what the character is made of. This is all much harder than it sounds.

Camera Artist - A lonely specialty, once mine, where the final camera operation and focus pulling is applied. They work in parallel with Animation and Editorial to effectively animate two unseen characters: A camera operator and a focus puller. They use the same tools as the animators, but animate the camera only.

Shading - While animation is in process these people write (and paint) the shaders which describe the surface appearance of every single thing in the film.

Sim - Short for simulation, this is where clothing, hair, blowing leaves, or most anything else that can be animated algorithmically is developed. There are also people who work with Art to tailer the clothing for those characters that need it. The demands on this department vary wildly from production to production as you might imagine.

Effects - The line is kind of blurry for me between here and Sim. Effects will definitely cover flame, smoke, clouds, and sparks. The work they do also varies immensely from show to show.

Lighters - Once all of the above is done, Lighters put the final illumination on a shot. They are the other half of the "cinematography brain", and are the ones who make it all look good. Up to this point the shows can look pretty crude. Things get really pretty in Lighting once all the shadows, reflections, and proper light sources are introduced. It's put off until this late in the pipeline because a) they need all the other input, and b) rendering starts getting expensive here.

GT (Global Tech) - While Pixar's production software, written by the Tools Group (who are not technically part of production) is sophisticated, capable, and advanced, each film pushes the tech boundaries somewhere. These are the folks in production who write the custom software for that film. This covers all kinds of stuff, from infrastructure to effects.

Localization - Disney distributes films all over the world. Text on objects, signs, etc. get translated into sometimes as many as 120 languages. These are the people who get the textures replaced and render the language-specific versions of the appropriate shots.

Sets - My brain folded this in with modeling. This is the team that models, as you might guess, the sets and things that go in them. In sheer numbers and scope this is the biggest bunch of modeling. I've changed the above to Character Modeling to better reflect the difference.

I'm giving short shrift to rendering, compositing, color grading, output, post production, localization, marketing, and probably dozens of others. This is really just a sketch of the big production machine.