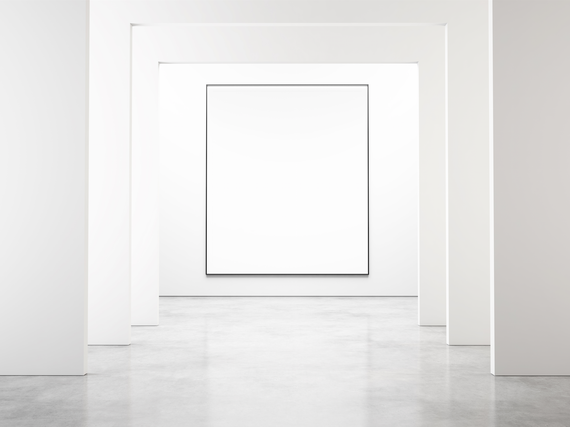 In museums every day people come into contact with blank, empty paintings.

There's seemingly nothing to be seen in or on them except for one color (or white or black) and some texture, maybe. French artist Yves Klein's 1950s series of vivid blue paintings could be the most memorable. Painted in a powdery ultramarine--which Klein patented as "International Klein Blue"--these canvases seem to hover against the wall. Part of this is the intensity of the blue but it's also due to Klein's subtle manipulations of his canvases. He extended them with wood, which he filed down, creating a gradual recession of the canvas towards the wall. He also rounded his paintings' corners, which helped blur the edges of the canvas and the division between wall and canvas.

How did Klein come to make this series of paintings and what do they mean? No one is altogether certain but there are various possible influences, some of them much more straightforward than others. First off, when Klein started painting seriously in the late 1940s, he became increasingly interested in only the color of pictures he was making and was viewing. He explained: "In front of any painting, figurative or non-figurative I felt more and more that the lines and all their consequences, the contours, the forms, the perspectives, the compositions, became exactly the like the bars on the window of a prison. Far away, amidst color, dwelt life and liberty."

Secondly, Klein was deeply engaged with various philosophies and religious traditions, including Eastern philosophies, Zen Buddhism, Catholicism and Rosicrucianism, an international brotherhood which combines religious practices and beliefs from Hermeticism, Christian Gnosticism and Jewish mysticism and claims that it has secret wisdom that has been handed down to them since ancient times. Klein was particularly obsessed from a young age with The Rosicrucian Cosmo-Conception (1909) by Max Heindel. Heindel's book has been described by the writer Thomas McEvilley as a "a psychological alchemy which aspires to set spirit free from solid bodies and restore it to the Eden of unity." It's argued that Klein, influenced by the text, believed, as an enlightened soul, he could inject something called "pure pictorial sensibility" into an artwork and then share it with others whose sensibility had also been enlightened.

Then there was Klein's interest in making a provocative gesture against the influential painting styles of France in the postwar period, since during this period, composition-less monochromes were definitely not an acceptable way to make art. In Paris, there were two major styles present: Surrealism and French interpretations of Abstract Expressionism, then ascendant in the United States.

Finally, there were the writings of Gaston Bachelard, which Klein discovered in 1958, far into the process of making the blue paintings, but which he considered one of the best ways to understand them. When asked why he made the series, Klein spoke of Bachelard's Air and Dreams. He explained in a 1959 lecture at the Sorbonne:

This is primarily a Mallarmean document in which the poet, living in 'contented world-weariness amidst oblivious tarns', suffers from the irony of blueness. He perceives an excessively hostile blueness which strives with an indefatigable hand to 'fill the gaping blue holes wickedly made by birds'. In the realm of the blue air more than anywhere else one feels that the world is accessible to the most unlimited reverie. It is then that a reverie assumes true depth. The blue sky yawns beneath the dreams, the dream escapes from the two-dimensional image; soon in a paradoxical way the airborne dream exists only in depth, while the two other dimensions, in which picturesque and painted reverie are entertained, lose all visionary interest. The world is thus on the far side of an unsilvered mirror, there is an imaginary beyond, a beyond pure and insubstantial and that is the dwelling place of Bachelard's beautiful phrase: 'First there is nothing, next there is a depth of nothingness, then a profundity of blue'...Blue has no dimension, it is beyond dimensions, whereas the other colors are not. There are pre-psychological expanses, red, for example, presupposing a site radiating heat. All colors arouse specific associative ideas, psychologically material or tangible, while blue suggests at most the sea and sky, and they, after all, are in actual, visible nature what is most abstract.

Klein's monochromes are engaged mostly with the transcendental (spiritual, religious) rather than the material (the formal aspects of making a painting). In general and historically, monochrome paintings have fallen mostly into one or the other camp but sometimes they creatively mix the two. Below is a quick review of some of the major monochromes in Western Art to demonstrate this. This is by no means the whole story but a way to have a grasp, a jumping-off point into this history.

Kasimir Malevich (1878-1935)
Where did monochrome painting start? It's generally agreed that Russian artist Malevich made the first one, his White on White, in 1918. White on White was one of the first works to be collected by The Museum of Modern Art, New York. It was bought by Alfred Barr, the founding director, in 1929.

The root of White on White was Malevich's theory of Suprematism, a new system of art-making he introduced in 1915 which privileged pure geometric shapes and lines (free from any attachment to composition and political or social meaning) above anything else. Suprematism, while not directly involved with any religion, was very mystical--and in this way related to the way Klein was thinking about his paintings. In particular, Malevich was inspired by contemporary writings on the Fourth Dimension by Pyotr Uspensky. Uspensky believed that mankind could not sense an important fourth dimension of life and this needed to be cultivated. Before Suprematism, Cubist painting had been seen as one way to do this.

Black Square, first exhibited in 1915, is considered the first Suprematist work. It's not considered the first monochrome because it is still a black square on a blank background--an image differentiated from a field. Suprematism by no means ended with Malevich. It was a major influence on other subsequent Russian artists, other European groups, such as De Stijl, the Bauhaus, as well as artists associated with what we now call Minimalism.

Malevich's White on White sought to push the potential purity of Suprematism to its seeming end. Now the form and color of a work was only barely differentiated. The painting was nothing other than the experience of a faint shape and appreciation of gradations of white. Malevich published a manifesto in conjunction with the first exhibition of the painting. Paralleling the optimism of the USSR after the Russian Revolution, he explained, "I have overcome the lining of the colored sky. . . . Swim in the white free abyss, infinity is before you."

Aleksander Rodchenko (1891-1956)
Rodchenko, a Russian artist known for his involvement in Constructivism as well as for pioneering work in modern graphic design, is more or less responsible for the first monochromes where there is absolutely no figure ground relationship.

There were three of them, entitled Pure Red Color, Pure Yellow Color, Pure Blue Color and they were first exhibited in September 1921, in a show called "5x5=25," alongside the work of four other Constructivist artists, Aleksandra Ekster, Liubov Popova and Aleksandr Vesnin. Rodchenko believed his works signalled the logical conclusion of painting, the end of painting, since he presented what he believed were the most basic colors paintings could be made out of. In this way, Rodchenko's paintings represent the first appearance of a primarily materialist interpretation of monochrome painting. In this way, as opposed to Klein or Malevich, there is no discussion of any theoretical or religious underpinnings to these works. Career-wise, these works were both an end and a beginning for Rodchenko. An end to old forms of art-making and a liberating starting point for his exploration of new forms and new techniques for art-making, such as photomontage.

Robert Rauschenberg (1925-2008)
American artist Rauschenberg, best-known for his association with Neo-Dada in the late 1950s and particularly his combine paintings, also created very significant monochromatic paintings: his White Paintings and a subsequent group of black paintings. The White Paintings were the first of the two and were arguably the more interesting and influential. In total there were five of them, created in the summer of 1951. These works were groupings of canvas panels painted all white. Rauschenberg was motivated to make the series because he wanted to make a painting that looked untouched by human hands. He was also interested in making a painting as a concept, not as a fetishized, unique object. For this reason, he conceived them as being able to repaired and remade without his direct involvement.

Composer and theorist John Cage was inspired by the blankness and silence of the White Paintings and responded to Rauschenberg's work with his most well-known composition, 4'33", a musical score in which a pianist just sits at the piano for 4:33 without doing anything. The work becomes the sounds and the activity of the outside world. Ten years after the White Paintings were made, Cage referred to them as "airports for lights, shadows and particles." Rauschenberg also referred to them as clocks, since if you tracked the changes on their surfaces day after day you could track the time and the weather. These two comments led to the longstanding interpretation of them as meaning what the world around them and outside of them presented.

Ad Reinhardt (1913-1967)
From 1954 until the end of his life, Ad Reinhardt (most-commonly associated with Abstract Expressionism), only painted black paintings. This represented a unique statement within the color field or gestural works the New York School had created until then and they would would become very influential on 1960s Minimalism. In 1961, Reinhardt wrote about the paintings as such:

Influenced by the abstraction of Chinese and Japanese landscape painting, Islamic design and Zen Buddhism, the black paintings were supposed to represent a new type of art, the most simplified version of art, with no particular vocabulary attached other than "art." This systematic negation was supposed to make them the last, ultimate paintings that affirm painting and push away all of the vocabulary and theory and everything else which purports to make paintings mean something. On one hand this ties them to a materialist way of looking at monochromes (and reminds us of Rodchenko's works, though Rodchenko's were not painting-affirming). On the other hand, the work inescapably becomes spiritual. For example, art historians have compared Reinhardt's negative way of defining his work to the way in which early Christianity defined God by everything it was not. Additionally, these works have also been read as political, a rejection of the politics of the era, principally the oppositional politics of the Cold War, due to the fact that Reinhardt was a political cartoonist and active in the 1960s civil rights and antiwar movements.

As always, please feel free to send me your feedback, either here or on Twitter. This is the seventh in a series of posts on individual artworks. Previous posts have concerned one of Cindy Sherman's Untitled Film Stills, Jean-Michel Basquiat's Pegasus, 1987, Keith Haring's "Crack is Wack" mural, Banksy and Damien Hirst's The Physical Impossibility of Death in the Mind of Someone Living.