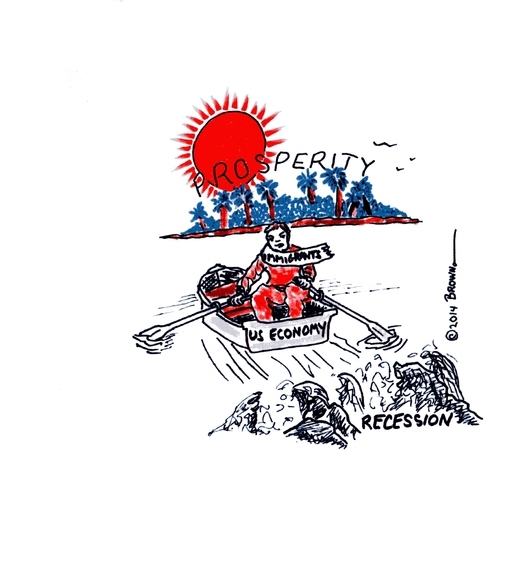 What do immigrants represent to the U.S. economy?

The rising tide of immigration floats the boat of the U.S. economy.

People do not immigrate to the United States to go on welfare!

Foreigners typically come to the U.S. to create a better life for themselves, be they fleeing from poverty or persecution, relocating to participate in a business opportunity, or coming to reunite with family members. Influxes of immigrants to localities that are immigrant-friendly tend to prosper more than those that are hostile. This is particularly true in stagnant areas that are losing population such as the Rust Belt.

A review of the statistics of the H-1B non-immigrant worker program clearly demonstrates that immigrant workers come to the U.S. because there are new jobs for them to fill. They are not coming to steal existing jobs from U.S.-born workers.

An H1-B visa allows employers to hire temporary, foreign workers in specialty occupations. A limited number of H1-B visas are issued yearly. Applications may be filed starting on April 1st of each year, and are accepted until all visas have been allocated.

It costs the U.S. taxpayer NOTHING to process and adjudicate immigrant applications.

United States Citizenship and Immigration Services (USCIS) operates under the principle of user fees. Applications for immigration benefits, such as green cards or waivers to prevent deportation, are paid for in advance by the person or employer requesting relief. The U.S. Congress has ordered USCIS to charge people what it costs to process and adjudicate a particular petition. For example, a petition by a U.S. spouse for his/her foreign husband/wife costs $420. The application fee for the green card in the U.S. costs an additional $1,070.

USCIS fees are a regressive tax against those least able to afford them.

Clearly, this is not a wide open door through which one can easily saunter!

In 2008, the high naturalization application user fee of $680.00 dissuaded applicants from applying for U.S. citizenship.

The weak economy, coupled with high user fees, lessened the ability of qualified immigrants to become citizens because they had to allocate their limited financial resources to more pressing issues such as paying their rent and feeding their families. U.S. citizenship firmly connects people to the U.S.A, and concomitantly stabilizes and strengthens communities where these new citizens live. Therefore, the decline in naturalization applications in 2008 could not have been beneficial to the social and financial fabric of the U.S. during such a profound economic crisis.

So what do immigrants represent to the U.S. economy?