All federal judges go through a public Senate confirmation process after they are nominated by the President. But where does the President get those names to nominate? There are over 800 federal judgeships - does the President have that many friends or political supporters to reward with lifetime appointments? Nominees appear like magic out of the White House and only a few insiders are aware of how they got there.

A new report released this week by Colorado Ethics Watch and the Courts Matter Colorado coalition seeks to shed some light on these questions. Behind the Curtain of Federal Judicial Nominations takes a peek at how home-state senators control the first stage of finding a replacement when a federal judgeship in their state becomes vacant. The President relies upon these senators to forward a few recommended names for each vacancy and then the White House vetting process selects the final nominee. Sometimes this process works well, other times it breaks down and vacancies are left to sit without nominees for months, even years. 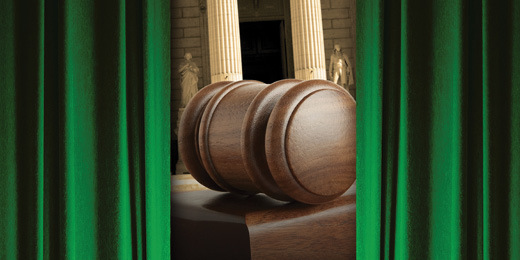 But this is not just another simple story of partisan gridlock. The report looks at Colorado and ten other states, (including home-states from Senate leadership) to compare the screening process used by senators for recommended nominees. Some states have Republican and Democratic Senators working together to fill empty seats on their federal benches. In other states, Senators appear to be using judicial nominations as a partisan battlefield with the President.

Without any overall rules or guidelines, each senator can choose how they want to approach this responsibility. Almost half the states use some type of senator-appointed advisory committee to screen applications and make recommendations to the senators. Most of these committees provide some level of public information about their activities - including open calls for applications. But senators who don't use a committee have a more private, opaque process which could sometimes appear to citizens as way to award judgeships as a political favor.

New senators elected this fall, or returning senators facing a new vacancy, can use this information to improve their own processes. Organizations and citizens can use this report to get involved in the process in their own states so that senators can hear the range of diverse perspectives before recommending a candidate.

Federal judges decide important cases which affect us all, from access to healthcare to voting rights. We should not just accept those nominated for lifetime positions and "pay no attention to the [Senator] behind the curtain" who is choosing these individuals at the state level. Every state should have a process that results in a diverse, fair and fully staffed judiciary. Public information about how senators make their recommendations to the President means more public accountability for senators so that qualified and diverse candidates are selected - not just political allies.