Exploring the bias behind what features are deemed most attractive and why even when "science determines" the world's most beautiful human, they always share the same European facial features and fair skin. 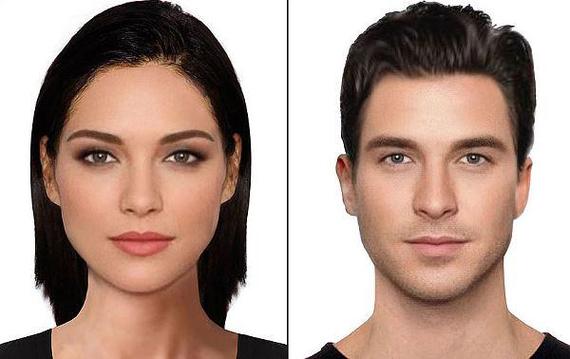 Beauty is in the eye of the beholder, that's what we're told, right? Well, what happens when beauty is in the eye of scientists? A recent article claimed that British scientist Dr. Chris Solomon, a proclaimed "expert in visual profiling," used E-FIT (Electronic Facial Identification Technique -- a facial recognition software used to create criminal profiles based on eyewitness descriptions) and a survey of 100 people to decide on what the most attractive faces are that a woman and man could possess. Traits that were rated by the surveyors included eye size, nose length/width, fullness of lips, natural hair style and color, and general symmetry of the face.

This isn't the first time someone has used survey methods to explore what humans find most attractive and desirable in other humans, in fact, it seems like almost every year there is a new list of "most beautiful people"-- usually celebrities. However, it's a new concept that we can use science, or more accurately pseudoscience, to get these results. Not long ago, news of a woman with the "most beautiful face," Florence Colgate, flooded the internet.

News outlets claimed that the young lady's perfections were mathematically and scientifically based. The Daily Mail stated that her face "matches an international blueprint of beauty... endowing her with flawless proportions." That "international blueprint" they referred to is the Golden Ratio as it applies to the human face, and the idea is that humans are hardwired to be naturally drawn to faces that most resemble this mathematical symmetry.

So what are the perfect proportions? Kent Online says that beauty can be summed up in a series of these simple ratios:

The perfect face has a distance between the pupils of just under half of the width of the whole face from ear to ear, eyes and mouth should be a third of the overall length from hairline to chin on the perfect face.

In other words, proportional forehead, nose, mouth and large eyes are all telltale signs of good genes.

They then stated, again, that beauty is strongly linked to symmetry and Florence has all the classic signs of beauty: "High cheekbones, full lips and a fair complexion."

These qualifications of universal beauty are supposedly detached from race and ethnicity, even though the article above blatantly stated "fair complexion" is a classic sign of beauty. If we take a look at a group of non-white men and women and examine the features inherent to their race, we can see that these "telltale signs of universal beauty" just don't add up to imply that there is any room for diversity. Looking back at the results for the most attractive man and woman: lips are full, but not too full; they have a narrow nose, as well as a smaller forehead, which apparently fits into the "classically symmetrical face;" they have large eyes, in contrast to smaller, almond-shaped eyes many people of Asian descent have; and, lastly, with the obvious undertone of colorism, a pale complexion equates to beauty and good health.

Experiments like Dr. Solomon's aim to create a visual representation of what beauty means, but instead it just reinforces Eurocentric beauty standards that have long been valued over other traits. As a result, emulation of whiteness is something many people of non-white descent undergo to obtain more acceptance or success, including skin-lightening and double-eyelid surgery.

I'd like to see a change in the conversations we have about beauty, one that expands beyond western ideals. Although it's true that humans are evolutionarily attracted to those who appear healthy and able to support a family, there is no scientific formula for beauty. A healthy dialogue around beauty ideals wouldn't focus on ideals at all, rather, it would celebrate the many different ethnic traits around the world and allow us to open our minds enough to bask in the glory and true beauty of diversity.