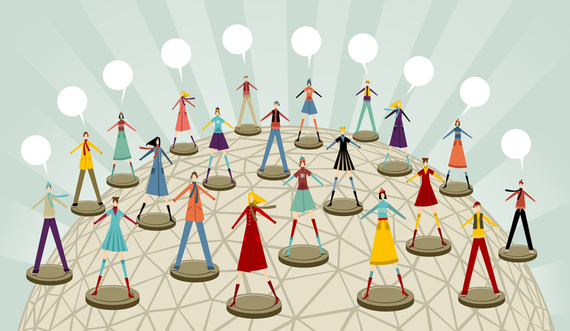 Twenty thousand refugees pour into a major city in a matter of weeks. The concerns of the city's residents grow. But what, exactly, are their biggest concerns? How widely held and intense are they? What do they believe should be done to address them?

Journalism's job is to generate the "first draft of history" that frames an issue and shapes a community's thinking. Yet the fact is that, as situations quickly evolve, journalists have always been profoundly disconnected from a timely ability to know what the public -- collectively -- thinks or feels.

For generations we've papered over that fact with well-deployed anecdotal evidence and compelling, human stories. All the while, though, we've been searching for new ways to give the public an active voice and meaningful role in shaping the contours of how a story is told. Why?

Because the public isn't just observing the events around them -- they are participants. Their views, knowledge and understanding offer invaluable insights and shape outcomes. When a reporter can't tap into the public's sentiments, the angriest, most organized and media-savvy voices, along with a revolving door of society's easily reachable socio-political-corporate elites, get the most attention. The result is journalism that's incomplete and all too often misleading.

Technology has always had a profound impact on journalism. When my great-grandfather bought the Louisville Courier-Journal in 1918, a newspaper's reach was limited by the distance it could travel between the time the presses stopped and 7 a.m. By the 1990s when I started in journalism, that reach had expanded dramatically but our ability to integrate the public into stories was still incredibly limited. Letters to the editor, "man on the street" interviews, anecdotal evidence and an occasional public opinion poll (if the issue was important enough) were about the best we could do. More recently, televised town halls, interactive online surveys, and monitoring what's trending on and engaging through social media have been great additions to the reporter's toolbox.

But even as technology has evolved - from print to radio and then broadcast television, from cable, satellite to digital communications - we haven't yet unlocked the access to that most essential source: the public.

Orb has been grappling with this problem - our model of journalism depends on popular participation, reliable data and knowledge from the crowd. And we think we may be on the verge of a solution.

We're in the process of developing a new online survey tool that will give journalists - and virtually anybody else - the power to easily collect, understand, and share more credible conclusions from crowd-sourced surveys. It won't replace existing survey tools like Twitter, SurveyMonkey, or Facebook. Instead, it will let people take the raw data they gather using these tools and statistically adjust the collected results, weighting them for demographic and other factors to make them more scientifically sound. And it will be free for everyone.

The tool will create new opportunities for Orb to achieve our goal of creating journalism that helps people see themselves as powerful participants in the evolving global human story. Even more importantly, it will help more traditional journalists do better, more informative work, will give policymakers and community leaders a tool for more accurately gauging how the people they serve feel about a particular proposal or project, and will empower individuals everywhere to understand how others view issues and ideas that are important to them.

I have a deep respect for the knowledge, experience and, yes, opinions that reside in the public. And at Orb, we believe that that wisdom is a critical component of reporting that can -- at last -- more constructively be included in what we do. It's exciting to be at the vanguard of the journalism community at a time when we can finally bring the public into our stories -- as participants, not just subjects or observers. As this capability evolves, I'm sure we'll be hearing a lot more about what you think -- it's about time!

We hope you're excited about the opportunities that are opening up as we are. If you'd like to learn more about exactly how the new survey tool will work, Orb's Chief Technology Officer Neal Rothleder explains it all here.