Since I came into my spiritual identity, I have identified as a progressive Christian. I have always been fascinated by Jesus, by his message, by his mission, and I have dedicated my life to it, whatever form that may take.

But I have never been completely comfortable as a progressive Christian. Yes, the term helps somewhat to alleviate the sense people sometimes get that I'm some kind of crazy, bible-thumping evangelical trying to convert them. "A progressive Christian?" most of them ask. They've never heard of it.

But even among the online communities of progressive Christians I belong to, people who are converted, people who know the struggle between the living word of Christ and the twisted abomination that is conservative Christianity, something feels off. While we usually agree on politics, even us open-minded and supposedly intellectually mature progressives disagree on who, or what, God is.

This question is the source of my discomfort, the catalyst for the battle raging inside me. What is God?

I have decided it is finally time to stop fighting this battle and accept myself for what I am:

I am an atheist. 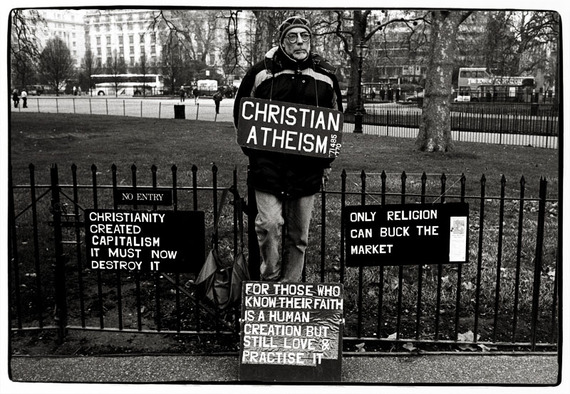 This guy gets it.

One of the reasons it's been so hard for me to come to terms with this is that I often find myself at loggerheads with members of the commonly named "New Atheism" movement. I detest their snide superiority, their lame attempts at humor ("imaginary friend" jokes especially), their outrageous claims that religion is the source of all evil in the world, and the surprising levels of misogyny among New Atheism's adherents.

But this is not what atheism means. Atheism is a lack of belief in a God or gods, but this is inadequate.

I still believe in "God."

What I do not accept is belief in a theistic deity, a "being" that created the universe, holds the universe together, or exists in or apart from the universe.

Many progressive Christians believe in what they call "panentheism," the belief that A.) the universe is within God, and B.) God is still greater than the universe. I at one point accepted this view, but I am afraid even it no longer holds sway for me.

Bishop John Shelby Spong long ago welcomed "the death of theism" and what it meant for Christianity (see his A New Christianity For A New World), and in that most literal sense, I can finally accept and embrace that I am a Christian atheist.

But in a theistic deity, even a mind-bogglingly transcendent being that encapsulates the entire universe and more? I cannot, with all my reason and spiritual acumen, conceive of such a being. God is not a being, but Being itself.

The world, this universe, is all that there is for us. Through Jesus of Nazareth, Jesus Christ, we experience transcendental Being, spiritual alertness, and the power of ultimate love.

This is why Jesus's worldly message of distributive economic and social justice is so important. The living God, not the theistic God of the past, connects and surrounds us all, and as long as some among us live in poverty, in destitution, in oppression, we fall short of the glory of God, of our ultimate potential. To put it shortly: the Social Gospel is spiritual.

I'm sure I will still traffic with the progressive Christian movement (they're a welcoming lot, for the most part) and support its emergence in the world of American Christianity. It is the next step towards a new theology, a new approach to the spiritual, and hopefully, a truly just and egalitarian world. A world where everybody has enough, a world free from the white supremacist capitalist hetero-patriarchy, a world where reason, science, and progress lead to the betterment of all humankind.

The kind of world Jesus wanted.