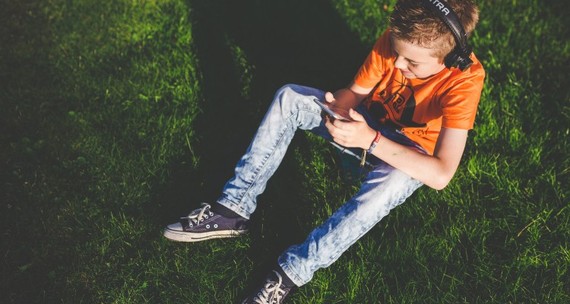 Is social media ruining our kids? How much internet activity is too much? What do FOMO (Fear of Missing Out), sexting, and selfies mean for teens? To answer these and other questions, Yalda T. Uhls wrote Media Moms & Digital Dads: A Fact-Not-Fear Approach to Parenting in the Digital Age (Bibliomotion, 2015). After spending over 15 years as a successful Hollywood film executive and producer, she switched gears in her 40s, earning a PhD in child psychology from UCLA. She now serves as Director of Creative Community Partnerships for Common Sense Media in Los Angeles, while continuing to do research with UCLA. She is also a mother to two teens.

In Media Moms & Digital Dads, Uhls uncovers as many insights about childrearing as surprises about gender: women 18 and older comprise a larger percentage of the gaming community than boys, and "shopping" and "excited" are the words most used by women aged 13-65 on Facebook. By comparison, the words most frequently typed by men were various four-letter words beginning with "f", plus "football" and "xBox." Social media and real life intersect in interesting ways. But what are we to make of it in a world where Facebook, with its 1.35 billion profile pages, could be considered the second largest "country" in the world?

Supported by peer-reviewed academic research focused on the social impact of technology, Media Moms & Digital Dads breaks down complex issues in a friendly, accessible fashion, making it a highly useful and, ultimately, reassuring read for anyone skeptical of the larger impact that social media might be having on young minds. 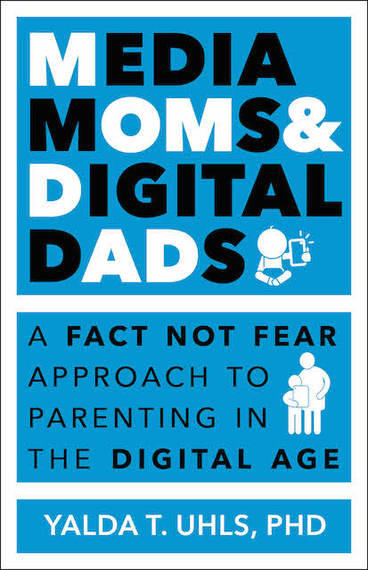 Paula Lee spoke with Uhls about her new book. This interview has been edited for clarity and length.

PL: Social media has revolutionized how humans interact. Why is there so much anxiety regarding children's exposure to the media?

YU: Children love social media, because it gives them access to their peers and allows them to perform many standard developmental tasks such as identity development. Yet, today's children are living through adolescence both online and offline, and in essence, they need to learn about the social world both in the real and virtual world. That means the potential for making mistakes is bigger than ever. Adults make mistakes all the time and post inappropriate content. But with teens' developing brains and early social learning, it's nearly a perfect storm.

PL: Bluntly, it seems as if social media must somehow affect behavior in indelible ways, like hamsters that keep pushing a "reward" button wired to their brain.

YU: Everything that happens offline happens online, often with more intensity. Also, research shows that teenage brains react to social exclusion more powerfully than at other ages. Leaving their family and finding a new one--their friends, typically at school--means that they are highly attuned to exclusion or inclusion. The permanent, 24/7, public nature of the online world can make it seem more emotional. But it's still the usual teenage things: trying to fit in, trying to make friends, hoping to do well.

PL: What about violence and video games? What does research tell us? Should we worry?

YU: I haven't found any research that convinces me that violent video games cause long term aggressive behavior. I don't think we need to worry. However, if a child is showing signs of problem behavior offline and other adults are telling you that there are issues, then I would take a close look at the video game content and consider restricting it. But this should not be only one course of action. Seeking professional guidance would be a more urgent step.

PL: I was really surprised that your book mentioned that there is no convincing evidence that first-person "shooter" video games cause more violent behavior in kids.

YU: I know! I was surprised too! Still, I don't advocate playing the really violent games. Even though some of those games seem to develop spatial skills, it's probably any game with a lot of action moving through space, that end up developing complex skill sets that end up transferring weirdly easily to real-life screens used by surgeons, pilots, drones, that sort of thing, which is really interesting. Even more interestingly, girls who play those kinds of games improve on those metrics.

PL: I get so bored playing those games--

YU: --which is why it is important that girls start getting involved with the actual design of those games and redesign them to get away from blasting and shooting things, because that's where careers are, where the money is. They can shape games to better fit their interests and not the other way around. We may not like gaming but they're a huge industry, and girls are interested. My daughter, for example, plays games on her phone quite a lot.

PL: Is it a good idea to play these games with your kids?

YU: It's a good idea to be involved with your child's online life, including games. The reason many tweens and teens hide things is because they're afraid you're going to judge them, not necessarily because they're doing anything wrong. You get nosy because when they're little, it's your job to tell them no or yes, and make those decisions for them. But if you do that when they're teenagers, they'll shut down. You want to let them know you're involved and interested, but not that you're telling them what to do. It's a balance!

PL: What's the most surprising finding from your research?

YU: That the values in tween [8-12 year olds] TV had changed drastically from the 1990's to 2000's. Fame became the number one value. And community feeling had dropped to number 11. The values flipped in a very short time period, right when social media became a worldwide phenomenon and reality TV started dominating the television universe.

I also was relieved to find that after five days without screens, preteens improved in their ability read emotional cues. That means we are "resilient" as Sherry Turkle put it in her New York Times article, "Stop Googling, Let's Talk."

PL: Are today's kids, who are raised from birth looking at screens, able to fully discern the difference between fantasy and reality? Will they be able to socialize effectively without looking at their phones?

YU: Kids need to spend time away from their devices, and the research shows they can and do want to do this. Technology doesn't change our fundamental behaviors. We're social animals, we enjoy spending time with each other in the same room, and often it's the best way to communicate. Frankly, getting lost in a good book is a better way to ignore people than computer screens.

PL: If you had one piece of advice to give technophobes, what would it be?

YU: It's here to stay and sticking your head in the sand won't help. Especially if you work with youth, have children, or interact with nieces and nephews, step into their world and help them apply everything you know about the world to the digital world. It may seem entirely different but so far, the research is showing that technology is a tool, just like any other tool (including the pointed stick) that helps us do the things we have always wanted to do: communicate, learn, hang out and be human.

PL: So the takeaway here is this: social media is what we make of it?

SU: What matters is that we're paying attention, and parents are paying attention to their child's online life as well as their offline life. Consider that the stats show that teen drinking is down but that college binge drinking is up. Ironically, if you try to keep them away from things you think are dangerous when they are younger, they'll end up doing it when they no longer live with you and you can't help them learn and model safe behaviors. The trick is to stay involved at all times, and make sure they learn in manageable doses.